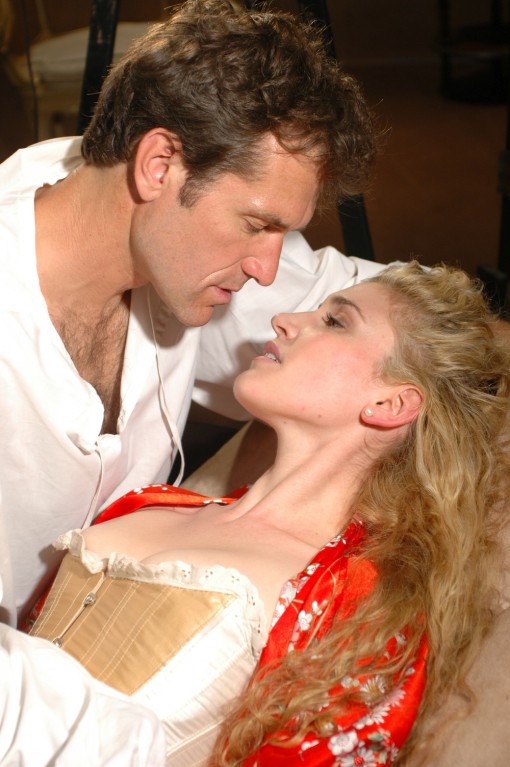 Stevie Ray Dallimore as Franz Anton Mesmer and Jessalyn Maguire as Maria-Theresa von Paradis in Joel Gross's "The Comfort of Darkness," which premieres Friday night at the Caldwell Theatre.

Franz Anton Mesmer, the German grandfather of hypnotherapy, may seem far removed from Icarus, the mythical young man whose hubris spurred him to build wax wings and then died when he flew too close to the sun.

But the analogy is close enough to guide actor Stevie Ray Dallimore in creating his characterization of the proud, driven Mesmer, the protagonist in the world premiere of the romantic psychological drama, The Comfort of Darkness. Joel Gross’s historical play opens Friday night at the Caldwell Theatre Company in Boca Raton.

Mesmer built his reputation and career—and considerable ego—on his revolutionary method for treating the ill, manipulating a mysterious power he called ‘animal magnetism.’ But when he tries to cure a beautiful young pianist’s blindness, it leads to triumph and tragedy worthy of Greek Classical drama.

‘It’s like an opera,”Dallimore said at the end of a recent rehearsal. ‘There are high notes, low notes. They don’t speak in flowery language, but it is a heightened realism, a more stylized [vocabulary and speech].’ To keep the play from veering into melodrama, ‘you have to believe it.’ Dallimore says.

Jessalyn Maguire, who plays the pianist Maria-Theresa von Paradis—Mesmer’s’patient and eventual paramour—agrees that mythical allusions are in keeping with the emotional scale of the piece.

‘It’s not the easiest thing we’ve ever done,’ said Maguire. ‘It’s an epic and we have to find the personal in the epic.’

Resonating metaphors echo about who is really blind, differing definitions of blindness and magnetism, tensions between light and dark, blessings and curses. Gross throws a few curveballs early on, starting with the hapless patient not being all that hapless. ‘When I first come in, she says, ‘I’m actually fine with being blind.’ She doesn’t see it as a disability,’ Maguire said.

For most actors, working on a world premiere is both a thrill and a terror. But the process of creating a character who has never existed before is not dissimilar from their acting in established plays, since veteran actors approach every role with the intent of new discovery.

‘You’re always crafting a character from scratch,’ Maguire said. ‘You don’t want to be [copying] what been done before. If you’ve seen Helen Mirren’s Hermia [in the film of the Royal Shakespeare Company’s A Midsummer Night’s Dream], you don’t want to do the same thing.’

‘Of course,’ she adds with a laugh, ‘you do steal some things.’

‘You find it for yourself like it was the first [reading],’ says Dallimore, who portrayed the role of the priest in Doubt on Broadway. ‘I’ve understudied to a lot of people. It’s important to make the part your own even when you fit into what’s already been set.’ 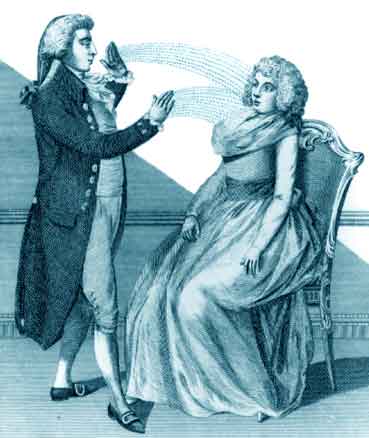 The Comfort of Darkness also offers the cast a canvas for recreating actual historical figures, real people who lived and breathed.

Franz Anton Mesmer was an 18th century physician who believed a fluid in the body that he called ‘animal magnetism’ created ailments when a chemical imbalance occurred. He contended that he could cure these ills, initially by using magnets and later by hypnotic trances induced in others by his own internal magnetism.

He was a popular figure in Vienna because of his dramatic public demonstrations—Mozart even lampooned Mesmer and his magnets in the opera Cosi fan tutte—but he was eventually scorned by scientists who drove him to Paris. While Mesmer died in disrepute, later scientists were intrigued by his patients’ reactions to the trances and his pioneering exploration of the power of suggestion possibly removing psychosomatic illnesses. His work is sometimes cited as the forerunner of hypnotherapy in psychiatry.

Gross’s’script is based on history but with some liberties taken, cast in the same freely recreative style of his Marie Antoinette: The Color of Flesh, which’was produced by the Caldwell in 2008.

The Caldwell has been striving to mix new works in its seasons, like last fall’s musical Vices, which it will reprise in November. Although Comfort was workshopped at the Actors Studio, the Williamstown Theatre Festival and the Old Globe, Gross was in Boca Raton earlier this month fine-tuning the script.

The production, directed by the Caldwell’s’artistic director, Clive Cholerton, has had its bumps in the road. Mesmer was originally to be played by the handsome, charismatic Broadway star Robert Cuccioli, best known as the hirsute lead in Jekyll & Hyde. Cuccioli, currently appearing in the off-Broadway musical, Dietrich & Chevalier, called Gross a few weeks ago to bow out.

Caldwell staffers were disappointed until they met the equally handsome and charming Dallimore; now they say they’re even more pleased with Dallimore’s acting chops.

‘That worked out better than expected,”said Cholerton