Challenging theater season is on tap for South Florida

Posted on September 6, 2010 by Bill Hirschman 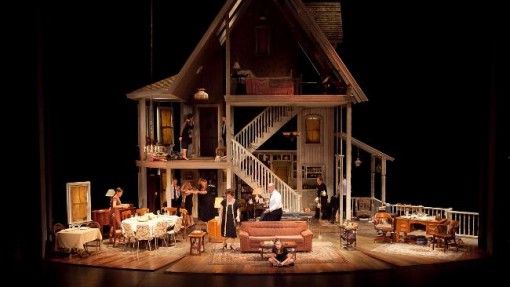 The mulri-tiered set for the Broadway production of "August: Osage County," which comes to Actors' Playhouse in March.

That audience remains and there’s plenty to satisfy them, but the 2010-2011 season will appeal mostly to an audience with a broader definition of ‘entertainment,’ people who hunger to think as well as laugh. There aren’t any obvious boundary-punchers like GableStage’s Blasted from last season, but there’s a promise of nourishing fare.

High on the season’s lengthy must-see list are Actor’s Playhouse’s staging of Tracy Lett’s brilliant August: Osage County (opening March 9) plus The Color of Desire, a world premiere drama set in 1960 Havana by Miami’s Nilo Cruz slated for October. Another major event will be The Brothers Size (August 27) as GableStage gives the first full-length production in South Florida of any work by Miami’s world renowned playwright, Tarell Alvin McCraney. Finally, the Maltz Jupiter Theatre presents the world premiere of the home-grown musical Academy (Dec. 7), a work that has won acclaim in New York and South Korea for its workshops.

Analyzing the season reveals the effect of the sluggish economy. Smaller edgy companies seem to be subsisting from show to show and have posted no further than one or two shows in the future. The downturn even washed away some companies during the past year and washed others onto shore. New Vista Theater Company closed up shop to be replaced in the same space at West Boca High by the scrappy Slow Burn Theater Company, which has already done Bat Boy and Stephen Sondheim’s Assassins, and plans to open this season Oct. 15 with The Rocky Horror Picture Show LIVE.

The successful theaters have found a niche audience for a specific brand of theater and strayed from it at their peril. Palm Beach Dramaworks’ audience has complained when it veers even a little from its mission of thought-provoking theater. Actors’ Playhouse takes few artistic chances, although it has taken some daring financial risks with Les Miserables and Miss Saigon. But when it has taken a creative risk like Floyd Collins, it has produced some of the most intelligent work in the region ‘ and its audiences have stayed away in droves. 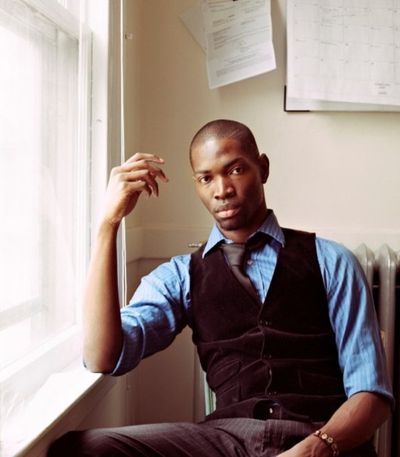 Tarell Alvin McCraney's "The Brothers Size" will have its local premiere at GableStage in August.

Only Broward Stage Door, with its audience arriving by chartered bus from the condos, has ventured slightly from what its audience expects ‘ namely musicals the audiences can sing along with from memory. Last season, Stage Door mounted a triumphant A Little Night Music plus The Drowsy Chaperone. This coming season’s edge-of-the-envelope nudge is The Light in the Piazza (Feb. 25), a romantic musical by Richard Rodgers’ grandson Adam Guettel, with a modern score that Rodgers might have trouble relating to.

Here are some of the high points at only a handful of the 60 theaters we have in the region.

Actors Playhouse at the Miracle Theatre: Okay, they’re doing Oliver over the holidays; they have to make some money somewhere. And The 25th Annual Putnam County Spelling Bee is a guaranteed crowd-pleaser. And The 39 Steps is similar to its past shows with actors playing multiple roles.

But Actors”is also taking on Letts’ monumental Pulitzer-winning dark comedy August: Osage County. Clocking in with three acts and three hours on a three-tiered set with 13 characters, its scope alone is daunting. But if done as well as it was on Broadway, it could be the fastest, funniest, unnerving, most compelling three hours you’ve spent in the theater in years. We’ll see if Florida theater lovers will put their credit card where their mouth is.

Their other headliner is Cruz’s The Color of Desire in October. Cruz, who premiered Anna in the Tropics at New Theatre, tells of a dashing American businessman in 1960 who hires a young Cuban actress to portray a lost love. Likened in tone to Chekhov for its poignant humor and emotional resonance, this piece has been described as portraying ‘the last moments of an island on the brink of change.’

Actors is also doing another world premiere for its summer musical, See Jane Run. Written by local actress Maribeth Graham and Dana P. Rowe, the show examines every facet of the 21st Century woman ‘from secret desires to manic disorders.’

GableStage: Joe Adler is correcting a long-festering community sin of omission by finally giving Tarell McCraney a fully-staged production is his home town in August with The Brothers Size. The 1999 graduate of New World School of the Arts is an acclaimed playwright in both this country and Great Britain. Part of a trilogy about African-Americans living in the South, the play explores the struggles of two brothers who walk the line between law and liberty, locked in a fierce tug-of-war for their souls.

Also on tap Dec. 30 is television star and Miami resident Sharon Gless headlining A Round-Heeled Woman, subtitled My Late-Life Adventures in Sex and Romance in January. Gless stars as a retired teacher who has not had sex in 30 years and sets out to remedy the situation by placing an ad in the personals in the New York Review of Books. The season opens Oct. 23 with Martin McDonagh’s A Behanding in Spokane, which played Broadway last spring with Christopher Walken. Additionally, there’s Tracy Letts’ far more gentle comedy-drama Superior Donuts in February; Sarah Ruhl’s newest comedy, In the Next Room or The Vibrator Play set for May, and Masked, a play about the Palestinian struggle seen through the eyes of one family, slated for July.

Caldwell Theatre: The Boca Raton company has just finished a troubled, uneven season both artistically and financially. But it hasn’t retreated from its commitment to remake itself into a vibrant mainstream house that doesn’t rely on old warhorses to engage an audience.’ It will open the season Nov. 7 with a retooled reprise of last season’s cutting edge musical Vices. It will be followed Jan. 2 with Becky Shaw, Gina Gionfriddo’s dark satire about 21st Century urban relationships among the self-obsessed. The show was a critical hit in New York in January 2009.

Rising Action Theatre: The company that recently moved to Fort Lauderdale has had a few hits like Bent and several errors over its five seasons. But no can fault their ambition for a promising lineup that includes the rarely-revived The Boys in the Band and the even more rarely revived The Killing of Sister George, ground-breaking plays about gay men and lesbians struggling to come to terms with their sexuality in a repressive society.

Palm Beach Dramaworks: The thinking man’s theater opens its season Oct. 8 with George Bernard Shaw’s Candida starring Kim Cozort as a’beautiful’Victorian’woman caught in a romantic triangle between her pastor husband and a young poet. It follows in December with a new play still running off-Broadway, Freud’s Last Session, which depicts the psychoanalyst near the end of his life debating the existence of God with writer C.S. Lewis. Later in the season is Donald Margulies’ Dinner With Friends and The Beauty Queen of Leenane, another Martin McDonagh examination of a deeply troubled Irish family.

Florida Stage: Now in its new digs at the Rinker Playhouse at the Kravis Center, the champion of new work opens its season Oct. 27 with a special offering. The company commissioned local playwright Andrew Rosendorf to write Cane, the first of what the company calls The Florida Cycle. Set initially in 1928, a farmer is losing his land to rising water. Today, the same area is days away from having no water at all. The past and the present are deeply connected in a story of betrayal and bloodshed, water and wind, family and fortune.

Also on the schedule are world or southeastern premieres of Goldie, Max and Milk by Karen Hartman, Ghost-Writer by Michael Hollinger (Opus), and The Cha-Cha of a Camel Spider by Carter W. Lewis (last season’s The Storytelling Ability of a Boy).

Maltz Jupiter Theater: In addition to Academy, the company known for its lush polished productions opens the season Nov. 2 with Twelve Angry Men directed by Chicago legend Frank Galati, followed by The Sound of Music, which is promised to be more dramatic than sugary, Jolson at the Winter Garden! and the Gershwin-powered Crazy for You.

Broward Stage Door: Besides The Light in the Piazza, the company plans to fill its side by side stages with certifiable crowd-pleasers Steel Magnolias, On the Town, Snoopy (the sequel to You’re A Good Man Charlie Brown), Mame, Plaza Suite and The Music Man.

Mosaic Theatre: Founder Richard Jay Simon has a season of plays that many folks in his audience haven’t heard of, but by playwrights they may know. In that category this year are Sam Shepherd’s Ages of the Moon in June, Donald Margulies’ Collected Stories in November and Stephen Belber’s Dusk Rings a Bell in April. Additionally, he opens the season with the farce Completely Hollywood, and follows it in the winter with The Irish Curse, a new comedy by Martin Casella.