Cirque Dreams brings Broadway and the circus to Broward Center 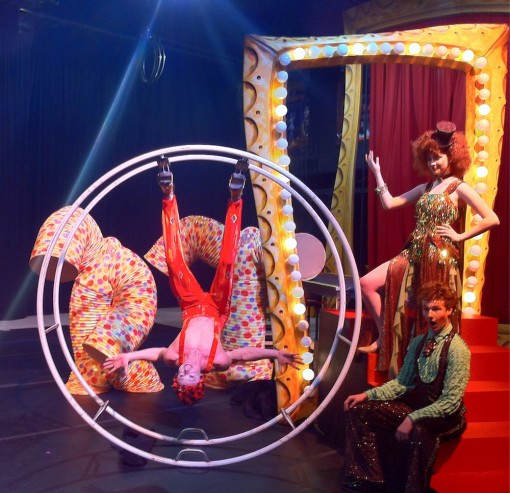 Fusing circus acts and show tunes, Thursday’s one-night-only world premiere of Cirque Dreams Broadway is both a tailor-made celebration of the Broward Center for the Performing Arts’ 20th anniversary and a very expensive backers’ audition.

For two hours, acrobats, aerialists and clowns will share the stage with bona fide Broadway stars and local youngsters in 21 production numbers drawn from the Great White Way repertoire, ranging from The Music Man to Stop the World – I Want to Get Off.

The show is a model for a future incarnation, said Neil Goldberg, the impresario behind the Broward-based Cirque Productions.

‘This is certainly a launching pad; there’s a much bigger picture’ in mind, he said. ‘There hasn’t been a really successful Broadway variety revue in the last 15 years.’

As a result, two-dozen possible producing partners are flying in to scope out the possibilities.

The Cirque acts being woven into the Broadway theme are a ‘greatest hits’ from past shows with performers borrowed from Cirque shows currently touring the country.

Additionally, the show will include local talent. A Russian clown will lead the Miramar High School marching band in 76 Trombones. Nine local youngsters will perform numbers from Annie and Oliver! South Plantation High thespians will perform a production number from Hairspray with Cirque performers cavorting around them.
But the underlying goal is to evolve the Cirque franchise. Since Goldberg started the company 17 years ago, ‘there have been many shows with a similar style. A show with great acrobatics, surreal costumes and makeup is no longer enough,’ he said.

As a result, Goldberg had been investigating different genres that could be melded together and considering catalogs of recognizable music rather than the original scores that the company usually uses. Among those options was the Broadway canon that Goldberg loved as a teenager.

The timing was fortuitous. Broward Center contacts he had dealt with before asked if he wanted to develop an event to celebrate its birthday. ” ‘ It just so happens’.’ He recalled answering.’

The program Thursday intentionally features many of the shows that have played at the Broward Center including the one that opened the building, The Phantom of the Opera. But Goldberg promises that like every other number, this will be like no Phantom anyone has seen before.

Goldberg’s Cirque Productions is not affiliated in any way with the Cirque du Soleil operation (the two battled in courts for five years over the use of the French word ‘cirque’) but they do share a similar vision of melding European style circus acts with lush and lavish American production values that even P.T. Barnum would gasp at.

Since its founding in 1993, the company has produced 13 shows, several of which have toured the world. They have been presented in theme parks, arenas, gambling casinos, an opera house, on a cruise ship and even the Broadway Theater in Times Square.

Goldberg is hoping the show will add up to something that will be ”beyond imagination.’

Cirque Dreams Broadway plays 8 p.m. Thursday in the Au-Rene Theater in the Broward Center for the Performing Arts, 201 SW Fifth Avenue in Fort Lauderdale. Tickets are $19-$99 by calling 954-462-0222 or visiting BrowardCenter.org.