Florida Stage settles into its new, larger home at the Kravis Center 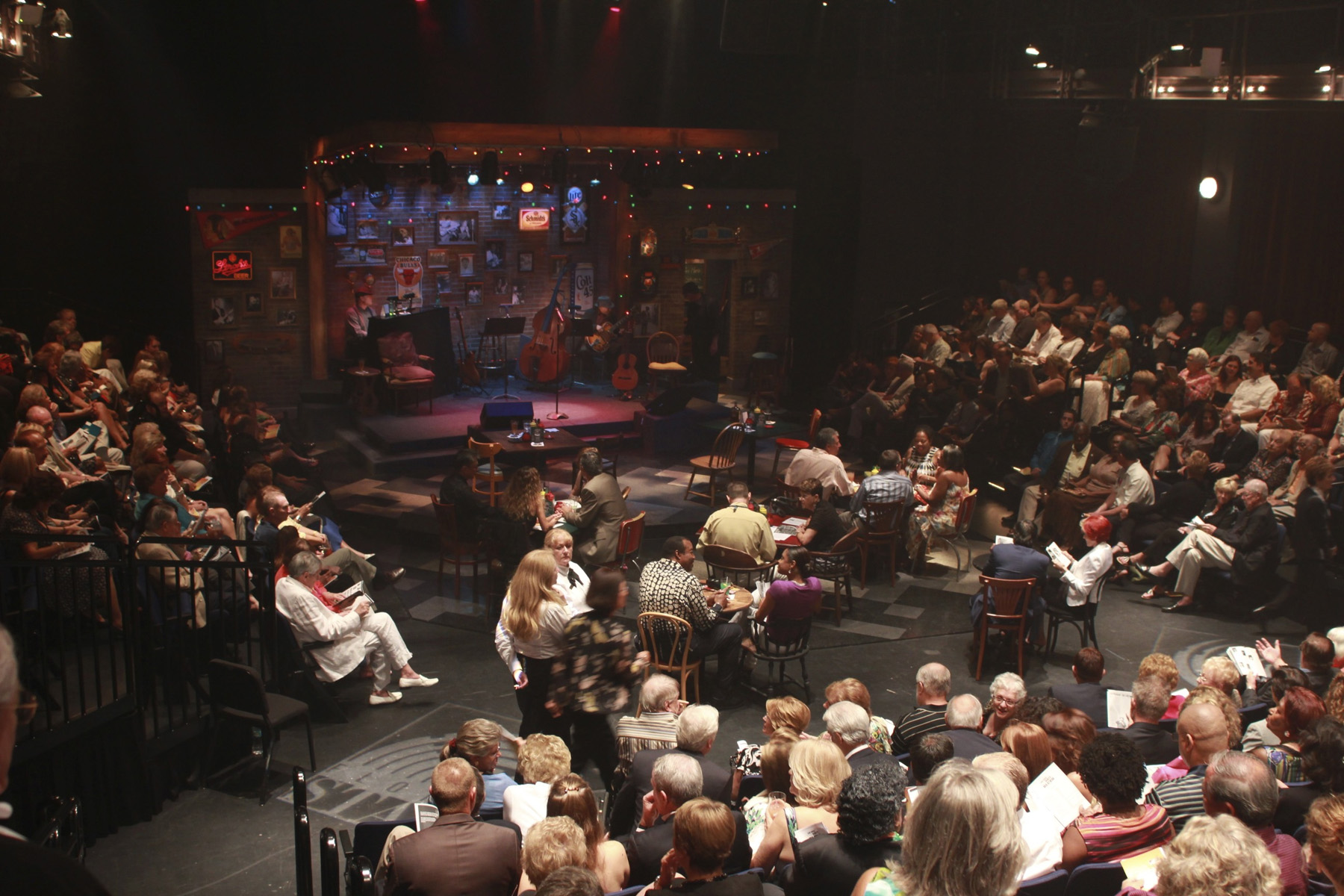 Florida Stage's set (with club seating) for "Low Down Dirty Blues" at the Rinker Playhouse.

The first thing that hits you is the sense of space.

Florida Stage audiences have nestled so long in its intimate amphitheater with the low ceiling that the new home with its stadium feel and lights 30 feet overhead might give some veteran subscribers a whiff of agoraphobia.

The Marshall E. Rinker Jr. Playhouse at the Raymond F. Kravis Center for the Performing Arts is a large cinderblock room masked with paint, decorative sound baffling tiles and colorful curtains. But it still has a decidedly utilitarian ambience by comparison.

‘It’s a more urban feel,’ acknowledged Michael Gepner, director of marketing for Florida Stage in West Palm Beach. But the industrial atmosphere vanishes as soon as the house lights go out and the show starts,

Moreover, the staff is savoring the new-found ability, finally, to stretch themselves out creatively since the grand opening earlier this month.

‘It’s going to be exciting because while I do believe we have retained the intimacy, it’s a different kind,’ said producing director Louis Tyrrell.

Gepner added, ‘There is a sense of heightened theatricality in this new venue. The height of the room gives an increased sense of scale while at the same time audiences can be virtually in the lap of the actors.’

But the first show in the new venue has already taught a lesson. The debut of Low Down Dirty Blues proved that the action and the set have to move closer to the audience. As a result the 34 additional seats that the company gained in the move may well be sacrificed to bring the play closer to the laps of the audience. ‘At the end of the day, it has to be about quality not quantity,’ Tyrrell said.

If there are tradeoffs, the assets outweigh the liabilities. Some are intangible gains for the 23-year-old company known nationally for developing new plays and musicals.

‘It’s time to be in the center of the community,’ Tyrrell said. The move into Palm Beach County’s largest arts complex gives Florida Stage a high profile that escaped it in the Plaza del Mar strip mall in Manalapan nine miles to the south.

Other benefits are more concrete, so to speak. The space allows for two-story sets, although likely fewer ones with three walls. The higher, longer ceiling enables more flexible lighting.”There were plays that Lou had to pass on because physically we couldn’t do it,’ Gepner said.

For instance, the regular season opens Oct. 27 with the world premiere of Andrew Rosendorf’s Cane featuring a special effects hurricane. The staging will benefit from a scope and scale that it couldn’t possibly equal in the former storefront in Manalapan.

The considerable square footage of the back stage and wings allows more storage, scenery changes and the simple ability to move around. In Manalapan’s claustrophobic collection of connecting warrens, the actors and stagehands often had to slip between the scenery and the back wall with inches to spare just to get from one side of the stage to the other.

But the biggest change, from the audience’s point of view, will be the playing area. The new space has a thrust stage, a large rectangular playing area that sticks deep into the auditorium and is surrounded on three sides by risers of seating, forming a sort of U-shaped cockpit.

While it’s a familiar setup to New Yorkers at the Circle in the Square and Vivian Beaumont theaters, the configuration is rarely seen in South Florida venues other than the Mosaic Theatre in Plantation.

It requires different staging because actors often have their back to someone in the audience. Rather than cemented in static stage pictures, actors at the center of the action are often moving so that their back is never toward any part of the audience more than a few seconds.

‘That kind of configuration is more like real life, a more realistic’spatial orientation and more interesting than the flat staging in a proscenium stage,’ said Tyrrell, who has previously directed in such spaces. 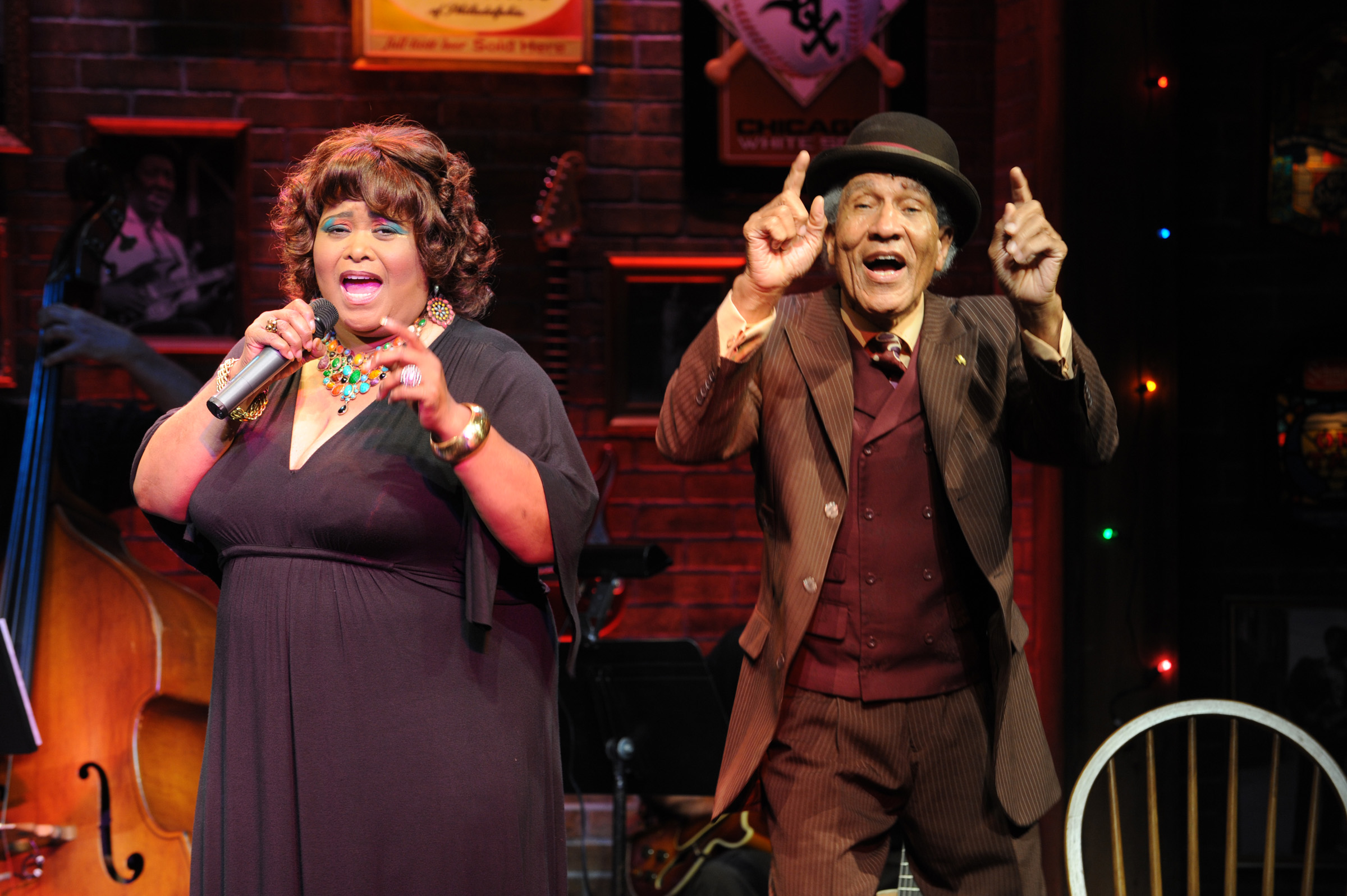 Some patrons complained that the action in the current Blues was too distant from spectators at the bottom of the U. As a result, 34 of the 289 seats currently closest to the stage, at the top of the U, will likely be removed and the setting built out several feet closer to the audience, Tyrrell said. Staffers initially hoped the added seats would address the dilemma Florida Stage faced when it could not accommodate the clamor for tickets for popular shows.

But ‘if the show is a hit, we can always add a Tuesday performance,’ Tyrrell said.

The U-shaped seating benefits the audience in other ways. The risers on the two sides of the stage are only four rows deep, putting some people closer to the action. Additionally the edge of the stage is no further from the last row of the main seating section than it was at Manalapan.

The wrap-around seating also means that the spectators can see other audience members’ reactions ‘ something that may build a synergy of reactions when patrons laugh or tear up.

The move also means a cultural change for the Florida Stage staff now housed across the breezeway in the Kravis administration office building. For the first season, Florida Stage will have to ‘play well with others’ because it’s sharing the performance complex. ‘You can’t just go ahead and do something. You have to ask (the Kravis staff) if you’re cool with this,’ Gepner said.

For instance, this season, Florida Stage will have to break down its risers and stage, clear out entirely, to allow Palm Beach Opera to stage rehearsals. It also will cede the stage a few times in the middle of high season because the Kravis has committed to concerts and small tours in the space.

To slip its shows between the Kravis schedule this season, Florida Stage has cut its five-show subscription season to four shows and reduced its’ six-week runs to 4 ‘ weeks.

The following season, 2011-2012, they plan to restore either the number of weeks, number of shows or both because the opera will likely find another solution. But the Kravis still plans to use the Rinker occasionally for short stints like The Capitol Steps, which will use the Florida Stage configuration.

The upside is that while the Kravis is using the Rinker in February, Florida Stage can use smaller spaces around the facility for its annual First Stage new play festival in February instead of the usual March. Often works featured in the coming season get their tryout in these workshops and this would give the company an extra month of lead time for development.

A less aesthetic concern that patrons are expected to appreciate is the Kravis Center’s secured covered garage. They should have little trouble finding a free space when other events are occurring at the Kravis because all Florida Stage performances will begin a half-hour earlier than they do now: 7:30 p.m. instead 8 p.m., and 1:30 p.m. instead of 2 p.m.

The care and feeding of patrons extends to offering food and drink in the lobby before the show, and allowing the audience to take their drinks into the theater with them.

Making the audience happy with such advantages is crucial as the theater opens its subscription drive this summer. Staffers expect some patrons will not want to drive the extra miles to West Palm Beach, but the theater’s new visibility and energy may attract new and younger audience members.

Some patrons have complained about one facet or another, but most reactions to the new space have been ‘overwhelmingly positive,’ Gepner said.

‘All in all, while we are still making adjustments and solving the occasional problem, we are seeing an increased level of excitement along with new and diverse audiences.’

One Response to Florida Stage settles into its new, larger home at the Kravis Center