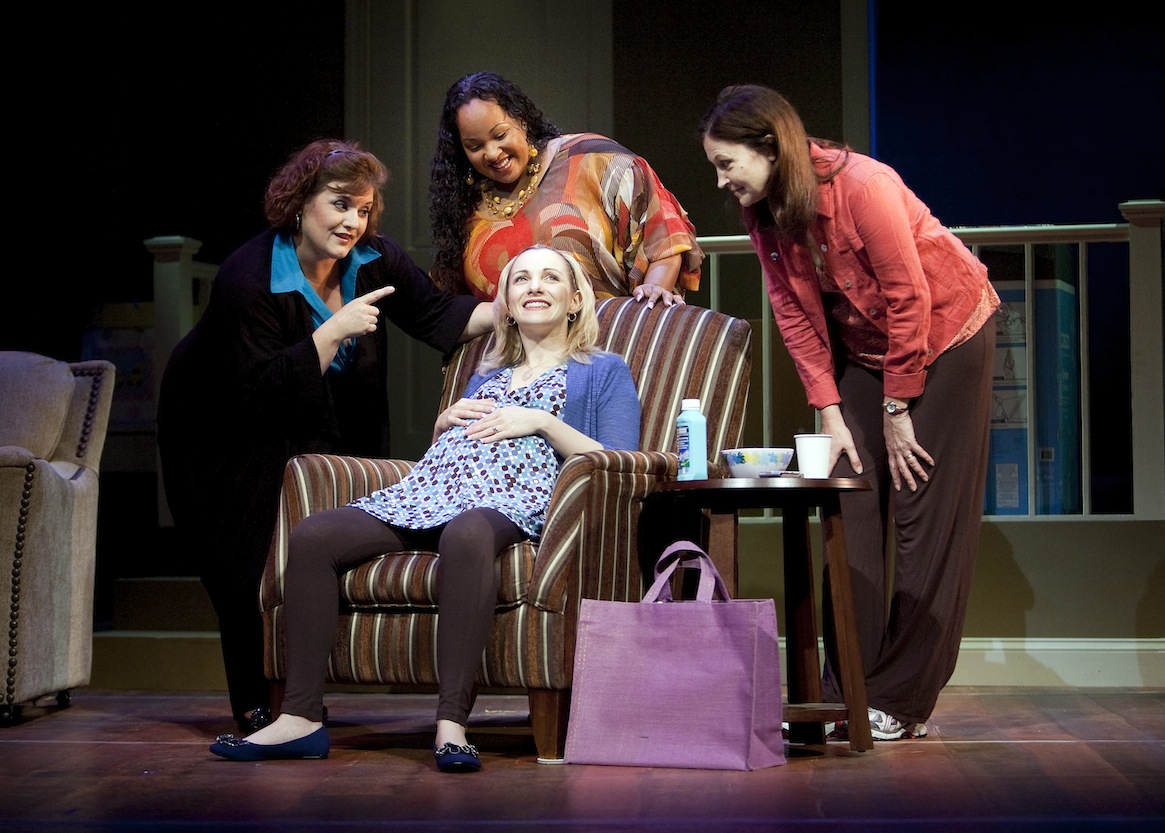 ‘It’s been a long labor,’ said Kathi Glist, a producer of Motherhood the Musical.

She’s got more of ’em: ‘I feel like we’re in the third trimester.’

She’s had a year to think up the puns in preparation for the world premiere Friday at the Miniaci Performing Arts Center at Nova Southeastern University in Davie.

Glist had good cause to beam last Tuesday during a photo shoot of the cast. She may have latched onto a second mega-success like Menopause the Musical, the phenomenon she has produced around the world for nine years.

‘Everybody is a mother, was a mother or had a mother. I think this show speaks to new mothers, former moms, grandmas. It works for guys, too, because they have wives or they’re sons of mothers.’

The show is wryly subtitled ‘the good, the bad’ the laundry.’ But Glist sees it as ‘more than just entertainment. It’s becoming an empowering experiential evening for women.’

The show opens in previews Friday until a gala Oct. 7. There is no ticket price break for previews.

Easy-to-tour small-budget musical revues with a tart and touching take on human relations is a niche dominated by GFour Productions, the Broward company Glist owns with husband Alan, and Sandra and Kenneth Greenblatt.

This newest entry by Nashville songwriter Sue Fabisch is a good fit with GFour’s Menopause, I Love You Because, Respect: A Musical Journey of Women, and I Love You, You’re Perfect, Now Change.

Fabisch describes it as ‘the joyous journey and loving look at the blessings and perils of being a Mom. It’s climbing the emotional mountain only to find that there’s laundry at the top. It’s discovering how powerful your love can be and how quickly they grow up. It’s helping them find their way and not losing yours. It’s about laughing and crying, craziness and calm, smiles and tears’ and all before breakfast.’

She based the show on more than a decade of writing songs about motherhood.

‘They tell you to write what you know’ and all I really knew was diapers and screaming kids and please let me go to sleep and mommy, mommy, mommy. I wrote a lot of the sweet lullaby songs when I had one kid and then the crazy manic songs after I had two and three kids.’

Some of those songs were played on country radio stations, some were recorded on her CDs and many were performed in her one-woman cabaret shows around the country. Some of the songs incorporated into Motherhood have sardonic titles like The Kids Are Finally Asleep, Soccer Mom, Grannyland and Costco Queen.

But there are tender ballads like Now I Know:

The musical has a dramatic arc if not a plot. Amy, a young woman about three weeks from delivery, is being feted at a shower by a stay-at-home over-worked underpaid, stressed-out mother of five; a lawyer who works too much and barely sees her kids, and a single mom struggling to balance work, her family and her divorce.

Amy has an idealized vision of what motherhood will be like. Her friends respond by detailing the realities.

‘You want everything to be perfect and you’re determined to make it so,’ director Lisa Shriver said about Amy. ‘Everything is going to be Hallmark cards and unicorns. But there are moments of fear and sheer panic. And that’s okay. You can’t control everything.’

The show also illustrates the sisterhood of motherhood. ‘It’s about how women come together to support each other,’ Striver said. ‘You become part of this club without being conscious of it.’

Even more, the show ‘is the voicing all of the drama that you’re going through. You realize it’s not just frighteningly specific to me. Other people are going through it. You can ask for help.’

Fabisch contacted GFour about 2 ‘ years ago after seeing Menopause and thinking the four-woman 90-minute format was perfect for her work.

The GFour team saw an early reading, which was only snippets of songs. ‘But we saw there was the makings of a great show,’ Glist said.

Based on their encouragement, Fabisch staged another reading in Nashville about a year later, but she only invited the Glists a week ahead of time. They couldn’t make it. Undeterred, Fabisch filmed the performance and then flew to Florida to insist the GFour team sit down with her in the room and look at it.

‘It still needed work, but we laughed and cried,’ Glist recalled. ‘It was one step above a typical musical comedy. It raised goose bumps.’

GFour committed to the project and asked for new songs, such as one dealing with the feelings of grandmothers. More staged readings followed with invited audiences, one in April and two in June.

At one, they invited women ages 15 to 88 including Glist’s 27-year-old daughter and 88-year-old mother. All three generations were enchanted by the work. That’s when the company believed they had something emotionally accessible and marketable.

About a year ago, the producers sought a director in New York. They particularly wanted someone in the creative team who had actually been a mother. They contacted Shriver, the choreographer on their show Ring of Fire. She had never directed before, but she was sure this was the right project: She had given birth almost a year earlier. Shriver told them, ‘I am very familiar with the material right now.’ Now, in rehearsals, she carries a small portfolio of photographs of her child to show to anyone who will sit still long enough.

GFour decided to premiere the work on home turf where audiences have been very receptive to their previous shows.

‘We haven’t produced a show in South Florida for so long. We’ve presented shows but not (developed) them. We wanted to bring it home, cast it here with local actresses, crew and musicians,’ Glist said.

For instance, the performers are local veterans of GFour shows: Margot Moreland, Laura Turnbull, Lisa Manuli and Kareema Khouri. The costumes are by Ellis Tillman, the sound is by Matt Corey and the stage manager is Amy London. Miami native Johnny Rodgers, a 1992 graduate of the New World School of the Arts, has returned to be the musical director, arranger and orchestrator.

Some critics snipe that GFour is not the home of Shakespeare, Stoppard or Sondheim. But it’s hard to argue with their successes and their affinity for properties that tap into the modern zeitgeist.

Alan Glist doubts a single day has passed in six years when Menopause has not been playing somewhere. There are four productions right now and another three next month. It has been seen in 15 countries, sometimes in as many as 12 companies simultaneously. He has similar hopes for this one.

GFour has been producing for nearly 30 years, sometimes supplying cash, but often as part of the creative team in developing a new work.

Among their Broadway productions: Nine, My One and Only, the revival of Zorba with Anthony Quinn, The Rink, Grand Hotel, Big, Catskills on Broadway, both the original and first revival of La Cage aux Folles. Their shows have been nominated for 72 Tony Awards, winning 30. But not all their shows have been runaway hits. Recently, they produced the middling 9 to 5, and the short-lived Ring of Fire, the Johnny Cash musical.

Kathi Glist makes no apology for the mainstream tone of the company’s recent successes.

‘At this point in my life, with the world as troubled as it is, I just want to do shows that people will leave feeling better than they came in.’

Motherhood the Musical runs Sept. 24-Oct. 31 at Miniaci Performing Arts Center on Nova Southeastern University’s Davie campus. GFour is calling the first two weeks ‘previews’ although there is no price break. Performances are generally 7:30 p.m. Tuesday through Sunday with some exceptions, 2 p.m. Saturday and Sunday; and a handful of Mom’s Morning Outs at 11 a.m. on some Tuesdays. Tickets are $29.50 to $40 and include parking. 954-462-0222; miniacipac.org .

Snippets of the music can be heard on Fabisch’s website as well as a free download of one of the songs at mommymusic.com.