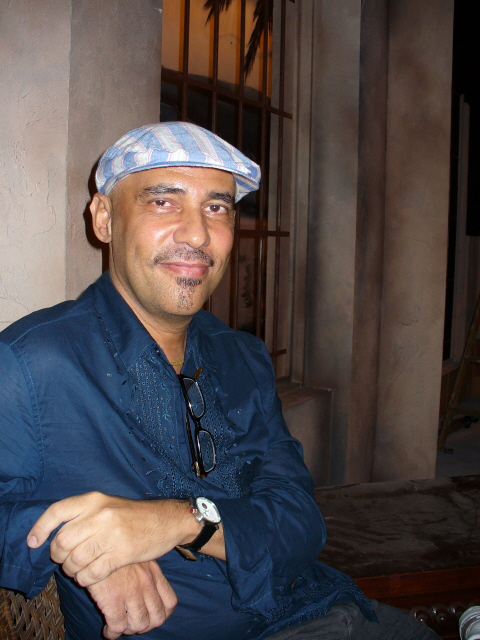 Nilo Cruz's new play, "The Color of Desire" will have its premiere Oct. 8 at Actors' Playhouse in Coral Gables.

It won’t just be the presence of the Cuban-American community that will imbue a resonance in Nilo Cruz’s play set in 1960 Havana when it has its world premiere next week in Coral Gables.

It’s that Miami’s favorite-son playwright is reaffirming his local roots by debuting The Color of Desire at Actors’ Playhouse on the Miracle Mile, arguably the region’s most mainstream theater.

Cruz lives part of the year in Manhattan, but Miami-Dade County is where he was raised, where his mother and two sisters still live, and where the 49-year-old writer still has a residence.

‘South Florida, I must say, is home for me. I have a place here. I live here. I spend more time here than New York,’ he said Tuesday.

In his mouth, the familiar phrases ring true: ‘To me it’s such an honor that a place like Actors’ Playhouse decided not only to do my play but to open their season with my play. I’m just delighted.’

Cruz is a member of the tiny club that also includes Maria Irene Fornes and Eduardo Machado: Cuban-American playwrights whose work has been widely produced because they write in English.

Within that club he has one additional distinction: the first and only Latino to win the Pulitzer Prize for Drama for’Anna in the Tropics, which received its world premiere at New Theatre in Coral Gables in 2002.

Add now The Color of Desire, his 11th produced play, which will officially open Oct. 8 ‘ two days before he turns 50 years old. ‘This play is going to be a present for my birthday,’ he says with a grin.

This premiere will be the fifth time his plays have received their first performance in South Florida. He said he prefers opening outside of New York and Los Angeles ‘because the expectations are higher there and there is so much pressure’ for a single shot at success. Premieres here make it possible for the first opening night of a full production to be just an extra way station in the development of a new play.

‘When you are doing a world premiere, you are exploring the material for the first time, with actors, a director, designers. Last night, I did some rewriting of the play and I want to be allowed to engage in that process, instead of being worried about it having to be perfect.’

The Color of Desire is set in revolution-torn 1960 Havana where an American whose business is being nationalized meets a Cuban actress and tries to use her to reincarnate the lost love of his life.

‘I was very much intrigued by the whole concept of projection, how we project relationships onto other people, how parents sometimes project their vision of the world onto the children. So the genesis of the piece started with this man projecting a past relationship’ onto an actress.’

Despite the backdrop of this and many of his other plays, Cruz emphasizes that he does not set out to write didactic plays that he dubs ‘pamphletic.’

‘My plays don’t have any political agendas whatsoever. They’re about characters and their journeys. For me, the politics in my plays really function as a way of framing the action of the piece, just as a background, but really I’m more interested in characters than anything.’

But political overtones inevitably peek through. ‘It wasn’t until I was deep into writing this play, until I finished it that I realized that this play is about the love affair between Cuba and the United States and how that love affair went sour or ended. In some ways, the main characters in the play serve as metaphors to that relationship between both countries.’

It is not meant to apply only to the 1960s. ‘There is a yearning for democracy, for liberation, and that’s why the play really resonates in modern times because Cuba is going through some changes and Cuba is opening up to parts of the world.’

Cruz knows he is labeled a poetic writer because of his affinity for lush imagery in his dialogue and a whiff of magical realism. But he warns audiences not to bring those expectations to this work. ‘I think there is lyricism in the play, but it might not be as lyrical as Anna in the Tropics because Anna in the Tropics was a story about people surrounded by literature.’

Cruz’s gestation periods vary from play to play. In this case, the process has lasted on and off for four years.

The Color of Desire was commissioned by Arena Stage, a leading regional theater in Washington, D.C. But construction of its new facility meant the play wouldn’t be mounted anytime soon. So after a reading there, the play went from workshop to workshop, reading to reading: Florida’ Stage, Manhattan Theatre Club, the Eugene O’Neill Playwrights Conference in Connecticut, a festival at the Goodman Theatre in Chicago, the Public Theater in New York City and the Cape Cod Theater Project. It will likely go back in the garage for more fine-tuning after the Actors’ Playhouse run.

It’s an evolutionary process he’s comfortable with: ‘To be honest about it, if I know what the play is about at the beginning, I get extremely bored in the writing process. For me, it’s about the discovery. There’s no arc whatsoever’ worked out in advance. ‘I start out with characters and discover what their journey is within the play.’

‘When I have a series of scenes, it is what I call my stone and then I start sculpting that stone. I have to have material in order to do that sculpting. I write many, many scenes. It’s like the same thing as a visual artist [doing] a series of sketches’ before painting on canvas. ‘Sometimes those scenes don’t enter the play. I write them as a form of investigation and when I have many of them, I do the actual sculpting.’

Cruz is familiar with journeys with no map in hand. He was born in Matanzas, Cuba, in 1960, but his family left on a Freedom Flight to Miami in 1970. His parents, Tina and Nilo, put down roots in Miami and opened Nilo Cruz Shoes near the venerable Versailles Restaurant on Calle Ocho.

He became enthralled with writing ‘ as a would-be poet ‘ while still in Melrose Elementary School. While he never pursued verse professionally, his love of lyrical writing was sealed.

About the same time, he worked for the South End Alternative Theatre, where he directed a production of Maria Irene Fornes’ Mud as part of the second International Hispanic Theatre Festival.

Fornes was so impressed with Cruz during a Miami workshop that she brought him to New York City to study with her even before he could graduate. Soon after, she gave him a recommendation to enter Brown University’s two-year play-writing program with playwright Paula Vogel.

He received a master’s of fine arts in 1994 and soon saw productions of his plays around the country. The Public Theater presented his first full New York production with its 1996 mounting of Dancing on Her Knees.’But it wasn’t until 1998 that A Park in Our House at Florida Stage became the first Cruz play staged in South Florida, followed by the world premiere of A Bicycle County at the same theater in 1999.

Still, there was not a full production of his work in his home town until 2000 when the Coconut Grove Playhouse staged A Bicycle Country in its vest-pocket Encore Room.

The following year, he began work on Anna, underwritten by the New Theatre in Coral Gables, plus the National Endowment for the Arts/Theatre Communications Group Theatre Residency Program for Playwrights grant. That provided $25,000 to the playwright and $5,000 to the theater for a production. He worked on it in the guest cottage of New Theatre’s then artistic director Rafael de Acha and an apartment belonging to the theater’s managing director Eileen Suarez, helped with an additional $10,000 NEA grant.

Anna received its world premiere at New Theatre in 2002 and won the American Theatre Critics Association/Steinberg Prize and the Pulitzer Prize the following spring.

After he rewrote Anna, it received several other productions including a brief run on Broadway plus a production at the Coconut Grove that he directed.

Over the decades, his work has been performed by the New York Theatre Workshop, Pasadena Playhouse, McCarter Theatre, Oregon Shakespeare Festival and South Coast Repertory. His resume also includes a residency at the prestigious New Dramatists program in New York City, the Alton Jones Award and a grant from the Kennedy Center Fund for New American Plays.

Recently, he was the book writer on workshops for a musical Havana with music by Frank Wildhorn, but the process stalled indefinitely when the sponsoring Pasadena Playhouse shuttered for financial reasons. He also cowrote the screenplay for a film Castro’s Daughter, based on the autobiography by Alina Fern’ndez Revuelta. It’s reportedly in the casting process for a spring shoot in Puerto Rico.

The pace has not slowed. This fall he’s been shuttling between Miami while tweaking Color of Desire for the Oct. 8 opening’ and Sarasota where he will see the world premiere Oct. 13 of his play Hurricane at the Ringling International Arts Festival.

Hurricane is a modern day story of a Caribbean man who is left with amnesia after the titular storm — a metaphor for many kinds of displacement and destruction. His family tries to restore his past and his present. Hurricane has been whittled down from its original two hours to one hour for the festival, but Cruz may go back to its original long form in the future.

After that, he has accepted a Mellon residency grant at Whittier College as a librettist to develop an opera with composer Gabriela Frank about the artists Frida Kahlo and Diego Rivera.

His homeland and ethnicity may be a crucial facet in his work, but, ironically, Hispanics have not flooded auditoriums where his plays are performed.

It’s a paradigm that local producers have bemoaned for decades: It’s very hard to get Latino audiences to attend English-language theater even when the subject matter reflects their experiences.

‘We had trouble getting Latino audiences to see Anna in the Tropics (on Broadway) and we had a star (in Jimmy Smits),’ said Cruz. ‘I think it takes a while to get the word out there. It’s not going to happen overnight, it’s going to be a gradual way to bring them into the theater.’

But he’s optimistic, citing Hispanics’ slow but sure embrace of Lin-Manuel Miranda’s Broadway musical In The Heights.

‘There are more African-American people going to the theater than there used to be before. I think August Wilson had a lot to do with it, probably Lorraine Hansberry, too, and people like Susan Lori-Parks. I think the same thing is going to happen with a Latino audience.’

While he wants fellow Latinos to enjoy the joys that theater offer, his goal is to go from being a Latino playwright to a playwright who is Latino.

‘To be honest with you, I started to write in the English language because I didn’t want to just limit myself to a Latino audience. I wanted to share my plays with the world.’