Struggling in tough times, the M Ensemble Company hopes for a future at the Arsht Center 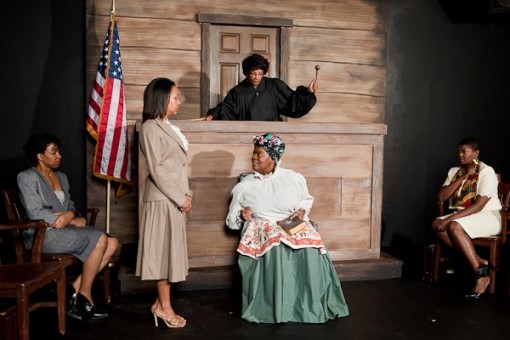 The M Ensemble Company's April production of "The Trial of One Short-sighted Black Woman vs. Mammy Louise and Safreeta Mae."

For nearly 40 years, the M Ensemble Company has held its undisputed position as Florida’s oldest continuing African-American theater company by growing when possible, shrinking when necessary and moving its shoestring operation around Miami-Dade County at least a half-dozen times.

But a serious financial crunch is threatening the company’s future.

‘Without some immediate financial assistance it appears that the theater company will go under,’ executive director and producer Shirley Richardson wrote in a recent email to supporters.

After a decade in a down-at-the-heels strip shopping center in North Miami, the company is abandoning its 68-seat vestpocket stage this summer, general manager Pat Williams acknowledged Thursday.

When it resumes producing at least one more show in the fall, M Ensemble will be without a home ”at least temporarily. But it will be scrambling for cash.

‘It really is rough,’ Williams said. ‘People are not giving like last season.’

In the past, patrons volunteered their contributions. People eagerly wrote checks in person, phoned in pledges and mailed in money with a donor form ripped out of a program.’ This year, Williams said, they barely received anything.

‘We are going out and asking for donations,’ she said.’ ”The whole season will be about fund-raising.’

That includes an increase in ticket prices. For years, the company has kept the top ticket at $25, but that can’t last. The exact price hasn’t been decided, but M Ensemble is conscious of not pricing itself out of its audience’s pocketbook.

The company, which has endured other financial storms, is taking the opportunity to morph into a tighter, simpler operation.

‘We’ve been trying to stabilize. This is a good time to reorganize. We’re doing inventory, looking at our lights, props, files. It’s a lot of stuff that we haven’t gone through in years. We’re finding antiques,’ Williams said.

There will be another show, she stressed. The company plans to mount Regina Taylor’s play with music, Crowns, in a one-time co-production with the Adrienne Arsht Center in its 198-seat state of the art Carnival Studio Theatre in Miami on Oct. 29-31 and Nov. 5-7.

And after that? M Ensemble has applied to be one of five tenants when the Miami Light Project opens a new performing arts space in January. The venue received a $400,000 Knight Foundation matching grant last summer to build a 120-seat multi-disciplinary performing arts space called The Light Box at the former Goldman Warehouse in the Wynwood Arts District at 404 NW 26th Street.

The Miami Light Project staff, board, and a national advisory group have not finalized its tenants/partners yet, although M Ensemble staffers are optimistic. Until then, M Ensemble’s business operation is moving to temporary office space in North Miami but maintaining its same telephone number.

Richardson and Williams wrote in a note, ‘It is our hope that the move will not only allow us to survive another season, but in fact provide us with an established home base.’

In the meantime, the company will not be idle. It plans to take its success from last February, Mahalia, on the road. The biographical musical is booked into Bethune-Cookman University for a one-night stand in Daytona Beach Oct. 23 and the company is negotiating possible dates in Tallahassee and Savannah, Georgia.

Uncertainty and change have been part of the company’s DNA from the beginning. M Ensemble was founded in 1971 by T.G. Cooper, a theater graduate student at the University of Miami. Contrary to a good deal of guessing, the initial in the title stands for his daughter, Maria.

Williams and Richardson took over a year later and have helmed it ever since, choosing plays, building scenery, loaning props from their own’ homes and supporting their passions by taking second jobs. Over the years, they have raised money with everything from bake sales to grants from Florida Arts and the National Endowment for the Arts.

In 2000, it moved into the storefront at 12320 West Dixie Highway and raised an annual budget of $250,000. In recent years, the company rented space next door for pre-show and post-show social gatherings.

The company has become known for the erratic quality of its patchwork productions. Some of its work has been amateurish, some profoundly moving, occasionally in the same show.

But no one has ever questioned its integrity, sincerity and dogged commitment to bringing the African-American experience to a decidedly multi-ethnic audience. It has been one of the few local companies to do plays by Pulitzer-winner August Wilson focused on race relations and black history, and featured other playwrights whose dramas are rarely seen in the region.

‘Their programs and selections are impeccable. They challenge and provoke and reveal themes and issues that are critical for a community to engaging and healthy and honest,”she said Friday.

The Crowns partnership would be the latest’ in the Arsht Center’s efforts to encourage local theater. It has loaned the Carnival Studio Theatre in recent years to the Miami Light Project and to City Theatre’s annual Summer Shorts series, said Arsht spokeswoman Suzette Espinoza Fuentes. Last May, it gave Mad Cat Theatre Co. space in the Carnival Studio for the scrappy theater’s second production of Marco Ramirez’s Broadsword.

One benefit that the Arsht Center would get out of the deal is access to M Ensemble’s huge mailing list simultaneously touting Crowns and its own October road show of the R&B musical Dreamgirls. (Scott Shiller, the Arsht Center’s executive vice-president, declined to confirm any pending partnership Friday, saying in a released statement that “the feasibility and specifics of a working relationship are in process and any specific plans will be announced publicly at the appropriate time.’)

Still, as the current venue is shuttered, Williams and Richardson are upbeat, hoping that the potential partnerships will ease the financial burden and time constraints of physically managing a property.

‘This (space) worked for us all these years. But we want to put more money in our productions, in our sets, and pay our actors more,’ Williams said.

‘We’re hanging in there.’