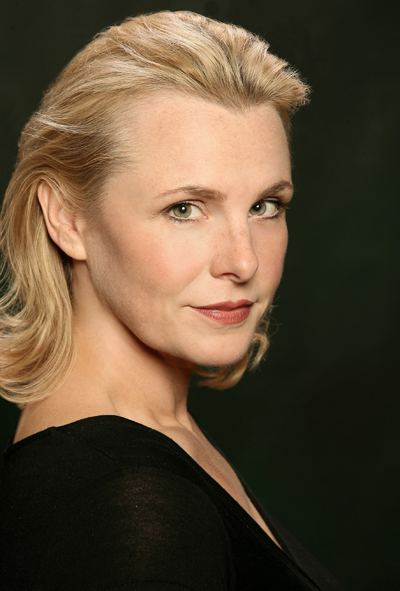 Angelica Torn will portray Madame Curie in "The Radiant," which opens Thursday at New Theatre.

Fascinated by what’s below the surface, hard-working, passionate, simultaneously guarded and vulnerable.

Actress Angelica Torn is describing the scientific icon Marie Curie who she will play in the world premiere of Shirley Lauro’s play, The Radiant, at New Theatre this weekend.

But the lifetime member of the Actors Studio in New York acknowledges that some of those adjectives are equally applicable to her and available to draw on for her performance.

‘People will be surprised that she was vulnerable and I can relate well to that. I tend to do that kind of part,’ she said last week between spoonfuls of a vegetarian concoction in a Coral Gables restaurant. But she later wrote in an email, ‘Vulnerability I rarely expose in my offstage life. Those very close to me get glimpses.’

Her green eyes glow as she talks about the Nobel laureate who discovered radium. ‘I’m attracted to women who are pioneers, who break the molds, who are full of passion. She faced an enormous amount of obstacles.’

Most people are only familiar with Curie from the 1943 MGM film starring Greer Garson, but Torn wants to ‘get into the middle of her heart, to see the woman behind the icon’. I’m fascinated by secret lives.’

Lauro’s play explores that as well. Set after the accidental death of her husband, the seemingly quiet and dignified 39-year-old widow with two children scandalized Paris with an affair with her young married assistant. That gave fuel to her enemies in the scientific establishment steeped in sexism. Yet Curie persevered to become the first person to win two Nobel Prizes, the first female professor at the Sorbonne and a pioneer in the use of radium to treat cancer.

Torn met Lauro through actress Estelle Parsons just before Torn joined Parsons in the national tour of August: Osage County in 2009. All three are members of the Actors Studio.

The two have been developing the piece ever since, Lauro rewriting the script (it was still evolving last week) and Torn appearing in three workshops and readings. Torn also filed away random ideas for her performance as she delved into other assignments. In recent weeks, she has been absorbing ‘four dueling biographies’ of Curie.

The play is being helmed by New Theatre artistic director Ricky J. Martinez who had a part in Lauro’s play Clarence Darrow’s Last Trial when it premiered in the same spot in 2005. The Radiant cast includes Stephen Neal plus Richard John Seikaly and Hana Kalinski.

A chameleonic actress who convincingly becomes sexy or dowdy, withdrawn or ebullient, Torn commits totally to her parts. For this one, she has shorn much of her beautiful blond hair into a Peter Pan cut. To reach the depth necessary for her characterizations, she spends rehearsals experimenting with scores of options and she appreciates a director who can help her zero in on what works. She praised a recent director, Wilson Milam: ‘I’m mercurial; I throw a lot of things around very fast and he’s like an octopus catching them like tennis balls.’

Her long-haul championing of Lauro’s script and participating in its development is characteristic of Torn, the textbook embodiment of a veteran working actress.

She makes her own opportunities; currently, she is various stages of development with at least six films and three plays. She commits to a work, becomes its advocate, even works on casting for productions slated for ‘someday.’ Now a board member of the Actors Studio, she uses her contacts there to stage workshop productions and limited runs of shows like the acclaimed Anna Christie she staged last month in New York and Los Angeles. She’s especially proud of Lucky Days, an award-winning independent film from her Torn Page Productions (named for her parents, Rip Torn and the late Geraldine Page), which she wrote, co directed and acted in.

Being proactive has paid off. Although 47 and the mother of two grown children, she has remained regularly employed, whether acting in Side Man on Broadway, touring August: Osage County on the road, producing ‘new provocative work from emerging artists’ at her family’s townhouse in Chelsea, penning two cable television pilots or guesting on all three Law & Orders.

South Florida theatergoers still talk about her tour de force depiction of Sylvia Plath at the Coconut Grove Playhouse in Edge in 2005. She is considering a one-night revival as a benefit here for a to-be-selected agency helping women. But she’s writing her own take on Plath’s life that she might tour with over several years. She appreciates Paul Alexander’s Edge script, ‘but it’s always how (Plath’s husband ) Ted did this to me and Ted did that to me. I want it to be more about her.’

She won a Carbonell as Honey in Who’s Afraid of Virginia Woolf at the Coconut Grove Playhouse in 1996 starring Elizabeth Ashley (she sharply inhaled at the pleasurable memory of working with her) and Frank Converse (‘a beautiful man’). She also recalled it was the first time Albee changed the play. ‘I had a line, ‘Screw you,’ and he changed it to ‘Fuck you’.’ He also cut the first passage referring to the imaginary son to delay his introduction in the play.

Additionally, she knows Coral Gables and parts of Miami because she has spent chunks of time visiting friends in the area. After the interview, she was going to visit a friend’s beach house in Fort Lauderdale.

After the Radiant run, her dance card is full. ‘I’m going to do some more TV and film to pay for my theater habit.’

But that habit is an integral part of her plans for the future. There’s her campaign to get a longer, more high profile run of Anna Christie, encouraged in part by the enthusiastic reaction of Al Pacino. She did a one-night exploratory reading of a key scene in A Streetcar Named Desire at a Tennessee Williams celebration in February with Alec Baldwin playing Mitch (he’s already played Stanley). She’s talking to other actors about a revival of N. Richard Nash’s The Rainmaker with her starring as the love-starved spinster Lizzie (‘It’s the only part my mother did that I want to do.’) And, of course, she hopes for future stagings of The Radiant.

Asked whether there is a dearth of work or a glass ceiling for women of a certain age in theater, she delivers a broad, gritty smile. ‘Not ” for ”me.’