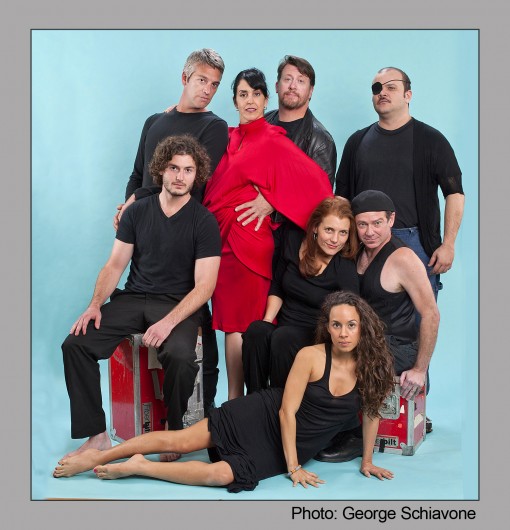 The cast of Zoetic Stage's "South Beach Babylon," which will premiere Friday night at the Arsht Center in Miami.

Among the highly anticipated evenings in local theater this season, few are in this league: a world premiere about South Beach to inaugurate a Miami theater company made up of some of the best talents in the region.

Friday not only marks the debut of Michael McKeever’s South Beach Babylon but the first full production from Zoetic Stage, a creation that aspires to be the local version of Chicago’s Steppenwolf Theatre Company.

Zoetic is betting heavily on the two-week run of a self-styled ‘wickedly funny and sexy’ play about artistic integrity versus commercialism set during Art Basel (and actually performed during Art Basel at the Arsht Center).

Starting a new theater in the depths of a recession seems foolhardy on paper, but this is not your usual cast of dreamers. Their reputations and experience are the strongest assets on their books.

The founders are actor-designer McKeever, likely the most produced playwright in South Florida; Stuart Meltzer, who will be producing artistic director; playwright Christopher Demos-Brown, and Stephanie Demos-Brown, who will preside over a board of energetic, socially-connected fundraisers.

The goal is to maintain a synergistic company of about 20 actors, directors and playwrights who already have worked together for years and have a communication shorthand among them. ‘We don’t want just to work with just company members, but we wanted to put together a family of people we know. These are people that are like our best friends who we hang out with,’ McKeever said.

Zoetic will focus on developing new plays and musicals as well as existing pieces, preferably ones reflecting the South Florida community. Christopher Demos-Brown, author of last season’s drama about Dade politics, When the Sun Shone Brightly, said, ‘There’s a lot of great work that doesn’t get nominated for the Pulitzer and a lot of writers whose plays don’t get a second or third production.’

Demos-Brown’s vision stretches 10 to 15 years. ‘In my analogy, I think of theater in South Florida as a really high-end boutique mall that lacks a Nordstrom’s. We have a really great Tiffany’s and Ann Taylor, but we don’t have the anchor store.’ Zoetic could be ‘what the Coconut Grove used to be.’

The dream has been gestating at least two years for Meltzer and McKeever, but it suddenly seemed doable when the partners had dinner eight months ago with the married Demos-Browns.

‘We took a deep breath and started listing the things we needed like a great young energetic board,”McKeever said.

Early on, Meltzer insisted on using the name Zoetic, the Greek word for pertaining to life. ‘The name of the company was never up for debate,’ Demos-Brown said, chuckling at Meltzer’s passion.

They hoped to raise $100,000 before the first show opened, McKeever said last summer before benefit readings of his short plays. Zoetic’s website lists at least $33,000 in pledges already received from individuals and groups, but the actual figure is much higher, he said last week.

There are three challenges working against their success. First, the economy.’ At least two companies have shut down in the past year and many are struggling from show to show. It takes $20,000 to mount a barebones show in South Florida and can easily be twice or even five times that amount.

But Zoetic’s leadership needed a high-profile debut, so its first show will be performed at the Arsht’s Carnival Studio black box theater with its union stagehands plus eight performers, most Equity members. The bill will likely be $80,000 and the company is counting on strong ticket sales to make up the shortfall. Then the fundraising starts all over again.

Subsequent shows may have smaller casts and use less expensive venues until the company can gain fiscal stability, Demos-Brown said.

But a major sustaining source of funding, government grants and corporate underwriting, aren’t likely to come until after Zoetic has a year’s track record, Demos-Brown said.

The second challenge is the lack of a permanent home. The company will explore venues in Miami for one or two years until it finds the right fit. That means Zoetic’s supporters may have to hunt to find the next show. But if fundraising and logistics work out, the next venue will always be ready to announce at the current show, McKeever said.

Third, while not every show will be Florida-centric, some wonder if works with titles like South Beach Babylon will ever be performed anywhere else.

The company is not overly worried if the themes are universal those in Pulitzer-winner August: Osage County set in Oklahoma.’ ‘There a couple of really good succession of the Plantagenet king plays; they’ve done real well,’ Demos-Brown said, dryly referencing Shakespeare’s history dramas. ‘If a play is thematically strong, it’s a lot easier relating to a Cuban family going through family problems than Richard’s deposition of the king.’

They hope that applies to South Beach Babylon. The setting may be the unique world of glitz and sleaze that is SoBe during Art Basel. But it uses that surreal environment and characters to illustrate the familiar pressure to subvert an artist’s vision for popular and financial success.

The evolution of South Beach Babylon is a study in serendipity. Ever since McKeever lived on South Beach in the early 1990s, he has wanted to write ‘the ultimate SoBe art play’ to capture’ ‘the beautiful chaos’ of the creative scene and its quirky residents.

But the idea percolated without an opportunity forcing it to be written. ‘The idea became something that was so distant that it almost became a period piece,’ McKeever said.

Then, when Zoetic became a reality, everyone agreed they needed a world premiere to underscore its commitment to documenting life in South Florida. McKeever’who works very quickly ‘ created the art play over the past four months.

But Art Basel didn’t become the focus until the Arsht became available. The open slot on its schedule was the same weekend as Art Basel. ‘Oh, my God, that’s the answer!’ McKeever said.

McKeever has been fine-tuning the script in rehearsals for more than two weeks, adapting suggestions from the company. ‘The ink is still drying (on the script) and this is my favorite part of the process. I’m dealing with actors I know really well and the director (Meltzer) understands my writing better than anyone else.’

If there is any lack of confidence, it doesn’t show. Without knowing where they will perform next, the exact dates or a certainty that funding will be there, Zoetic has announced the rest of its inaugural season.

The winter show will be David Adjmi’s Stunning, which played at Lincoln Center in 2009. Zoetic’s website decribes it as the story of a well-to-do Syrian Jewish couple in Brooklyn and their African-American maid, whose lives are turned upside down in a clash of cultures.

The spring show will be the world premiere of Wrongful Death by Demos-Brown, whose day job is as a lawyer. The story is ‘A jaded personal-injury lawyer battles to land the case of her career in this satirical look at the way the American civil justice system values human life.’

The summer show will be Diagram of a Paper Airplane by Carlos Murillo, a ‘tale of people not being able to forgive or forget. Chock full of comedy, drama and guilt, this fascinating play examines the lives of four former best friends and the Pandora’s Box that is opened when one of them dies tragically.’