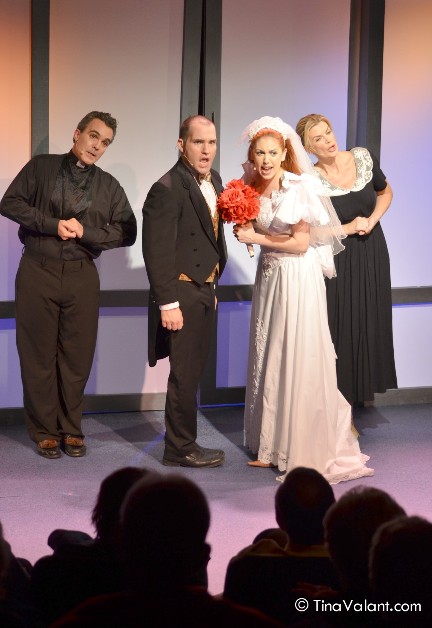 Sometime after more than 400 performances, Wayne LeGette lost track of how often he had appeared in the enduring musical about relationships I Love You, You’re Perfect, Now Change. Whatever the figure was, the odometer is about to roll over this month.

Now, 15 years, four productions and some grey hair later, he’s “graduated” from the younger role of “Man 1” role to the older “Man 2” in the show’s latest incarnation at The Plaza Theatre in Manalapan. 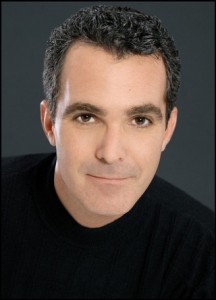 “I’m just grateful not to have to be working a day job,” he said last week with his tongue firmly stuck in his cheek after a grueling tech rehearsal.

In fact, while he enjoys the show – he must, having done it so often – he’s clear-eyed about its merits.

“It’s funny (that it is so popular) because it’s not Sondheim, because it’s not Andrew Lloyd Webber, because it’s not what you call ‘great’ music or lyrics that you sing in the car. But I can’t believe how giddy I get. I vibrate and jump up and down in rehearsal. There is something about it that is it just so singable and enjoyable.”

For the six people who haven’t seen it, ILYYPNC is reputedly the second-longest-running musical in Off-Broadway history. More parochially, it is likely the longest running production of any kind in South Florida where its first bow at Actors Playhouse in Coral Gables began in September 1998 and extended a solid year.

The gentle book and lyrics by Joe DiPietro and music by Jimmy Roberts set up vignettes about different couples trying to make a connection, all portrayed by two men and two women in varying roles. The vignettes range from first dates to a widow and widower tentatively reaching out to each other in their 70s.

The show has legs most producers only dream of because it speaks to something special inside the audience, LeGette said. “I’ve seen a couple of (productions as an audience member) that were mediocre and audience still went berserk.”

“I think it’s that everyone, gay or straight, we all need another person, we need to fall in love with a person we want to spend our lives with. People are trying to make a connection. Love is eternal, love is the most important thing in life and never ends you never want it to end. You always want a connection with another person.”

A more mature, more accomplished theatrical scene has evolved in South Florida in the 15 years since LeGette first tackled the piece. But the new assignment reminded LeGette of those earlier days.

“Things were different down here, especially at Actors’ Playhouse. There was a core of us that, while there was no resident company, there were people Dave (Arisco, artistic director) could rely on.”

LeGette was part of the group frequently cast, so when he saw the title on the schedule, “I probably called and left a voice mail; we didn’t have email. I don’t think I even came and auditioned. Dave Arisco sang me songs over the phone. This is the way the world was back then. He was trying to sell me. It was back when they paid (virtually) nothing.”  Times have changed; LeGette did have to audition to get the part of Sir Belvedere in Actors’ Playhouse’s production of Spamalot later this winter.

“Dave said I don’t know which of the men you’re going to be, but I worked ahead of time with (musical director) Dave Nagy.”

Outside of New York, ILYYPNC did not have much of a buzz, as LeGette remembers it. “I had absolutely no idea that it was going to take the world by storm. I think we had heard of it. I don’t know how long it had played off-Broadway. I think we were the first regional production of the show anywhere. When we got the scripts and scores, don’t think anything had been printed. The score was that chicken scratching.”

Eventually, Arisco assigned the 30-year-old LeGette to the younger Man 1 part  and gave the older Man 2 part to another members of the unofficial Playhouse gang, Stephen G. Anthony. They were joined by Playhouse stalwarts Margot Moreland and Jennifer Hughes.

One challenge was LeGette’s age when he sung the poignant song by a man long married, “Shouldn’t I Be Less In Love With You.” Nagy suggested taking the key down a half step to reflect that the character was much older than LeGette. Since then, the official score has had an alternate arrangement to address future problems. The irony is that Plaza director Kevin Black has reassigned the number from Man 1 to Man 2 – so Legette, now 45, has the number again – and can use the old arrangement.

The production stunned everyone involved by striking a chord in initial audiences. They, in turn, built a strong word of mouth and returned themselves with other friends and loved ones.

“It’s hard to fill that main theater (with 600 seats) on a Wednesday night if you’re doing Fiddler on the Roof or Hairspray.” LeGette said. “I mean when producers say a show is sold out, there are usually 20 seats or so somewhere.  But there were Wednesday nights when you literally could not get a seat.”

The only similar phenomenon locally is the resilient comedy Shear Madness,  which Moreland has played in several local productions and around the country more than 1,000 times.

After three months, Arisco called a cast meeting “and had the coolest conversation,” LeGette recalled. “He sat us down and he said this show is playing like gangbusters. We’re going to hire two full-time understudies. Feel free to do other gigs, come back, you will know you have a job here.” Extending to an open-ended run was a rarity back then other than at Brian C. Smith’s Off Broadway Theatre on E. 26th St. in Wilton Manors. Hiring understudies was and remains an even rarer practice in South Florida.

The show was moved to the newly-remodeled upstairs theater. Moreland took a vacation and returned, and the two men took other roles briefly and then stepped back into the line. It ran so long that when Moreland left briefly, she was replaced by Stacy Schwartz. Schwartz stayed when Hughes left, a move that later resulted in Schwartz and LeGette falling in love and getting married.

LeGette and Moreland were nominated for Carbonell Awards; Anthony, Arisco and the show won statues.  But its legacy extends beyond awards.

“We got letters from people literally years later” about the show,” LeGette recalled. “There’s the guy on Broadway now, Joey Lucas, and I remember seeing him as part of  this gaggle of kids who must have come five or six times. And when I did Three Sisters (last season for Miami Theater Center) there was a guy in the cast who said, “I saw you in I Love You. My grandparents took me to see that. I saw it when I was eight.”

Not every memory is painless. During one Saturday afternoon’s performance, LeGette climbed up an oversized three-tiered wedding cake. Above him was an elevated platform holding the band, protected by a heavy iron lattice. The lattice came loose and fell on his head. Blood spurted out of his nose all over his tuxedo shirt as he shouted some obscenities not in the script.

“All I remember is, over the P.A. system, is hearing “Ladies and gentlemen, we’re taking intermission.” Paramedics determined LeGette wasn’t badly hurt, although they were a little confused by the microphone still attached to his head.

“Once they knew I was all right, all the women talked about were how cute the little paramedics were.”

Later, Actors brought ILYYPNC back with the same cast at the Broward Center for the Performing Arts in 1999-2000 and the Wilton Playhouse in 2000. LeGette and Moreland also did it at Florida Rep in Fort Myers, and LeGette filled in under a special Equity contract when a lead dropped out of a production by the Delray Playhouse Community Theater, And when the Foothill Theater in Wooster, Massachusetts, wanted to put it up in four days, a director who had done the show hired a cast that had done the show including LeGette who submitted his audition on videotape.

And now he’s back. His current castmates are Mia Matthews, who played opposite him in the Plaza’s Chapter Two in January; Leah Sessa, who has done several shows for Broward Stage Door, and Mike Westrich, whose recent work ranges from acclaimed productions such as Outré Theatre Company’s tick…tick…BOOM to Island City Stage’s The Timekeepers.

Black has altered the structure a bit: LeGette and Matthews play all their scenes together, and Sessa and Westrich play all theirs together, as opposed to the mix and match structure in previous incarnations. LeGette is fine with this because he ends up with two extra songs, “The Marriage Tango” and “Should I Be Less In Love With You.”

But LeGette has changed as well, and he brings more life experiences to the show. “At the end of the play, when we’re playing 70-year-olds, it helps. I’ve been through two divorces. I’m not 30 anymore. You understand this a lot better.” 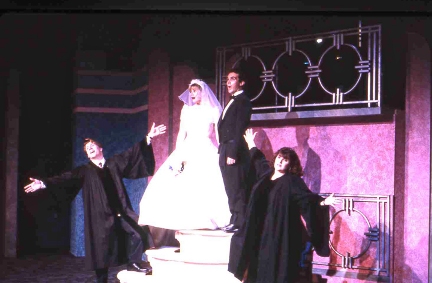 The same scene in 1998-99’s production at Actors’ Playhouse with Stephen G. Anthony, Jennifer Hughes, Wayne LeGette and Margot Moreland. The lattice above their heads is the one that will fall on LeGette’s head. / Photo courtest of Brooke Noble at Actors’ Playhouse

This entry was posted in Features and tagged Actors Playhouse, David Arisco, I Love You You're Perfect Now Change, The Plaza Theatre, Wayne LeGette. Bookmark the permalink.

One Response to 15 Years, 4 Productions And 400-Plus Performances Later, Wayne LeGette Returns to Role