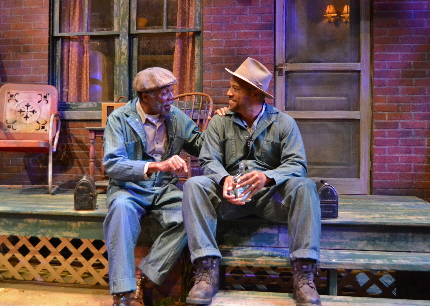 With herculean effort, he had inhabited the titanic but flawed hidebound father whose dreams of being a pro ballplayer had collapsed into the reality of earning a living as a garbage-man in 1950s Pittsburgh.

Then the phone rang. It was William Hayes, producing artistic director of Palm Beach Dramaworks. He was in the process of finding just the right actor to portray Troy in his own production, slated to open March 29. Hayes had a specific vision of Troy that differed from several versions Hayes had seen on stages and film.

“I wasn’t sure I wanted to go through it again,” said Purry. “It’s too damaging to explore this man’s psyche and all of what he went through. In order to portray that as accurately as possible, you have to feel some of that. You know one of things about acting is your mind can’t always tell the difference between reality and acting… The stresses and the tensions build up.”

But he talked with Hayes for at least an hour. Hayes spoke about how he felt that most productions missed one crucial quality in Troy. “Every one of them was missing what I think it needs. Every great American classic play has a time when the characters are showing vulnerability,” Hayes said recently.

His agent and his wife advised him to “get away from it,” to think about it a few days. Purry went for a long hike and something called to him.

So here he is in West Palm Beach suiting up again. This time the experience is a bit different. In Portland, “I’d go home and go right into the book (script). Now I go home, I relax, I take a walk, maybe I cook something, I watch something on TV. I talk to my wife about rehearsal.”

Purry is a veteran of regional theaters across the country including the famed Penumbra Theater Company of St. Paul where he played numerous roles including Troy’s son, Cory.

He is in good company, some of whom have appeared in the play before: Karen Stephens as Rose; John Archie, Bryant Bentley, Warren Jackson, Jayla Georges and Raegan Franklin. Jovon Jacobs is Cory, fresh from playing Walter Lee in New City Players’ A Raisin in the Sun and who played Troy’s older son in M Ensemble’s production.

Fences focuses on Troy Maxson, a promising baseball player in the Negro Leagues who came along when Major League Baseball was still segregated. Now in 1957, he’s much older after serving a prison term. He has missed his chance playing sports, but he has built a life with his devoted wife, Rose; his teenage son, Cory; and his psychologically damaged brother, Gabriel

As Dramaworks news release puts it well:  “He’s a man of great dignity with a strong work ethic and even stronger convictions; he is also rigid, angry at the hand he’s been dealt, and prone to violent outbursts. His thoughtless actions and uncompromising attitudes lead to devastating consequences for his family.”

Purry was intrigued this time by Hayes’ focus on Troy’s carefully submerged vulnerability, which was hinted at but lost in the volatile conflagration and armor-plated exterior of predecessors Denzel Washington and the iconic landmark creation of James Earl Jones.

Vulnerability is “in the text of Fences but it’s been glossed over actors. They give him this tough exterior but they are not finding the moments in the play that show his vulnerability,” Hayes said. “We learn very early on when he is talking about his childhood: Troy’s mother left him at eight, his father beat him up and left him outside, and he ran and toughened his exterior when he was 14 years old… You have to take moments to show the pain and turbulence of that (made him believe) that he had to toughen up to tune it out and survive.”

Both men said a key is evident when Troy is alone with a baby and he tells the child that he is afraid.

That is the underlying subtext in the play’s most famous scene when Troy coldly, even threateningly, tells his son that he doesn’t have to like the teenager.

Purry explained, “It’s dangerous. You can die as a black man in that climate from being too soft, worrying about what people think. Everything he faced ultimately was life threatening in some way.”

He continued, “It’s still a terribly segregated world and a segregated world is dangerous for black folk…. There may be things out there that you may desire, but it’s just not going to happen. Hope unfulfilled is damaging. It hurts and if you get to the point where you don’t expect it, it doesn’t hurt.”

Purry cites the moment when Troy’s wife, Rose, asks, “Why don’t you let him play football; he’s just trying to be like you in sports. And he says, ‘I don’t want him to be like me. You’re the only decent thing that ever happened to me. I wish him that but I don’t wish him nothing else.’ ”

Doing the play with a different “family” has it attractions, Purry said. “It doesn’t greatly alter the play, but it changes — just like when you move to a different city and meet new people and there are influences that might alter or change you a little bit. Ultimately, it’s like growth and an expansion of who you are.”

The work is the 1950s entry in Wilson’s Pittsburgh cycle of ten decade-by-decade plays documenting the African-American experience.  But like many pieces of classic theater, it resonates with other cultures as well.

“Wash away the color of the skin and we see people that we relate to,” Hayes said. “Troy is many of our dads, Rose is many of our mothers. Many people have complicated relationships with their parents… Fences is “unique to the black experience, but it’s also a universal experience.”

And for Purry, it’s another shot at an endlessly challenging role.

“James Earl Jones has done Othello 18, 16 times and he said, ‘Yeah, I still don’t think I quite got it.’ And Troy is like that. There is so much to be explored in him.”

Fences runs through March 29-April 21 at Palm Beach Dramaworks, 201 Clematis St., West Palm Beach. Show times are 7:30 p.m. Wednesday, Thursday; 8 p.m. Friday and Saturday; and 2 p.m. Wednesday, Saturday, Sunday.  Individual tickets are $75. Student tickets are available for $15, and Pay Your Age tickets are available for those 18-40. Tickets for educators are half price with proper ID (other restrictions apply). Call (561) 514-4042, or visit palmbeachdramaworks.org.