Adam Who? Slow Burn’s The Wedding Singer And Clay Cartland Do It Their Way 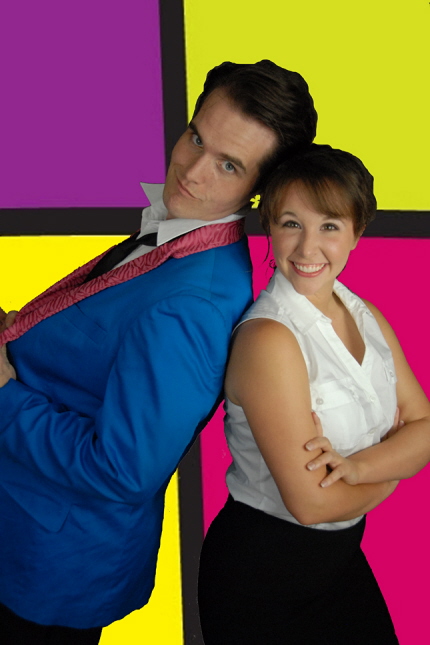 There’s not one but two elephants in the room, actually in the auditorium, as Slow Burn Theatre Company prepares to take on the 2006 stage musical version of The Wedding Singer , which opens Friday for a brief two-weekend run in Boca Raton.

The first is the impression made by the original 1998 romantic comedy film that has nuzzled its way into that guilty pleasure slot in popular culture with its gentle lampoon of the 1980s zeitgeist.

The second pachyderm is the film’s leading man Adam Sandler, the goofy snarky Saturday Night Live alumni who proved in this third leading role that he could play riotous farce, but also be lovable and appealing in a goofy snarky way.

Set in 1985 New Jersey, the plot centers on a star-crossed couple who are meant to be together. Robbie, who once dreamed of being a rock star, now leads a wedding/bar mitzvah band notable for sky-blue tuxedos and pouffy ’80s hair, playing that bizarre musical oeuvre not covered by Rock of Ages.  Working the other end of the banquet hall is the even more lovable waitress Julia (played in the film by a dewy Drew Barrymore).  Both are engaged to the wrong people, obvious in Robbie’s case because he gets dumped by his fiancée early on and goes into a hilarious emotional tailspin. And it goes from there. 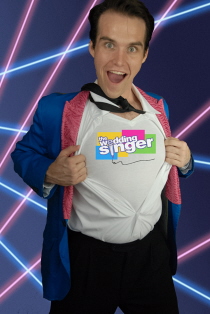 The specter of Sandler as Robbie falls solidly on the shoulders of local actor Clay Cartland who has proven in recent years that he has an undeniable talent for both manic comedy and musical theater, often in the same show.

The key is not to attempt to impersonate Sandler, but to create his own take on the character, Cartland said. But that’s a challenge.

“I tried not watching the movie at all. But I own it. It’s my favorite Adam Sandler movie. So I watched once. Well, I watched it four times.”

But he avoided channeling Sandler, in part because Sandler– who often relies on a sly smile to betray his thoughts — wouldn’t play well on stage.  “He’s very small. He mumbles,” Cartland said by phone between an audition and rehearsal Tuesday. So he and director Patrick Fitzwater came up with “what would happen if Adam Sandler, Jim Carrey and Jack Black had a baby.”

Besides, the stage show is different from the movie, notably the ending.  The show features music by Matthew Sklar and lyrics by Chad Beguelin (both later to write a stage version of the film Elf) and a book by Beguelin and Tim Herlihy, a frequent Sandler collaborator and writer of the film.

Its status as a cult hit, if not a huge Broadway success, made it a perfect fit for the young company known for such varied fare as Stephen Sondheim’s Into The Woods and the not-Stephen-Sondheim The Rocky Horror Show. Working with a tiny budget but usually producing solid productions, Slow Burn always seems to attract the adjective fledgling, except that Wedding Singer is closing Slow Burn’s fourth season.

The rest of this cast is made of familiar faces from Slow Burn’s amorphous repertory company including Courtney Poston as Julia, who was impressive as one of the twins in Side Show and as one half of Trekkie Monster in Avenue Q, plus Conor Walton , Domenic Servidio, Erica Mendez, Rick Hvizdak, Nicole Piro, Penny Mandel, Jerel Brown, Rick Peña, Ben Solmor, Jonathan Yepez, Lauren Bell, Sabrina Gore, Kaitlyn O’Neill and Alisha Todd.

Recently, Cartland stopped the show as the drunken swain in Actors Playhouse’s farcical The Fox on the Fairway. His musical theater chops were on display this season as one of the enthusiastic songwriters in Showtime’s [title of show] and in Promethean Theatre’s Song of the Living Dead. While many of his roles have a demented quality that comes out through a gleam in his eyes, he can dial it back as he did as the title character in Stage Door’s Jeffrey, as one of the actors playing multiple characters in Island City Stage’s Twentieth Century Way, and he was memorably affecting in Outré Theatre Company’s staged reading last year of tick…tick…boom!  as the hero’s best friend – a part he couldn’t reprise this spring because of Fox.

So he chased after the role of Robbie. With the advice of Slow Burn musical director Manny Schvartzmann,  Cartland pulled out the guitar he had learned to play in college and auditioned with it.

Then he began practicing a half-hour a day. “It’s like riding a bike. You never forget how to make chord shapes.”

This entry was posted in Features and tagged Clay Cartland, Slow Burn Theatre Company, The Wedding Singer. Bookmark the permalink.