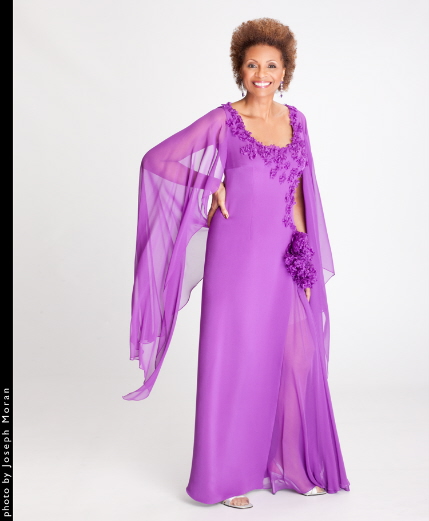 For someone who has been singing virtually the entire Jerry Herman songbook for decades, it’s ironic that only now is Leslie Uggams getting to play the title role of Mame in the musical bowing next week at The Wick Theatre.

“Jerry was interested in me doing it years ago since I sing so many songs from the show,” she said between forkfuls of salad between rehearsals. “But at the time the (licensing company) wasn’t sure that it could work with an African American.” For those not familiar with the plot, the Manhattan heroine woos a husband at a fox hunt at a Southern plantation lorded over by a crusty matriarch who thinks the War Of Rebellion is still underway.

“But to me, it’s even funnier now. When she goes in to this plantation and Mamma’s worried about her being a Yankee, and now she finds out she’s a chocolate drop….” She doesn’t finish the sentence because she starts chuckling.

“I think that’s hysterical. And what’s wonderful is after they get to know her, they love her. If we all got together and got know each other, we’d find we have so much in common, instead of judging people by their color.”

This is a rare reference to racial politics from someone who acknowledges but does not brag about her status as a ground-breaking African American pioneer in 20th Century entertainment, including acting as a six-year-old in Ethel Waters’ television program Beulah in 1951, winning a Tony on her first Broadway role in Hallelujah Baby in 1967 and creating the iconic role of Kizzy in the landmark television series Roots in 1977.

“I never really think about, oh, my gosh, I’m the first. Yes, I know that (I am) but if the project is not interesting then I could care less about being the first.”

And now she is likely the first established African American star to play the iconic Mame Dennis, the life-loving Depression Era social butterfly and force of nature created in Patrick Dennis’ novel, then a play and movie with Rosalind Russell, and finally the 1966 musical that originally starred Angela Lansbury.

Uggams has played other color-blind roles before including Dolly Levi in Herman’s Hello Dolly, the witch in Sondheim’s Into the Woods, a part in Cinderella, her first theater role as the veddy English debutante in The Boy Friend, and, last summer in Connecticut, Mama Rose in a production of Gypsy in which her two daughters were blond headed as children and one turned into a Latina when she grew up.

The cross-ethnicity has never bothered her. “First you come out (on stage) and people go, ‘oh.’ But then it becomes about whether you’re telling the story and keeping them engaged in the story and not just concentrating on what color you are. Because if that’s the situation, you’re not doing your job.

“It doesn’t matter what color you are. (Mama Rose) and Mame are mothers trying to survive and raise their kids as best they can. Now you might not agree with how they’re doing it,” she said with a laugh about both ladies’ idiosyncratic methods. “But when you look back, Gypsy Rose Lee and June Havoc became stars. So it’s really a universal story about mothers who don’t have men around to help them raise their kids. Single moms.”

She isn’t trying to reinvent the part. “If it ain’t broke, don’t fix it,” she said. Instead, she focuses on the similarities between her and the part, or at least people she’s known about.

“I see Mame as a kind of Josephine Baker-Bricktop kind of person. She (Baker) was a survivor; she was full of life. People always wanted to be around her. And Bricktop had this club in London that I used to read about when I was a kid, and Richard Burton and all these people used to come, she had like this soiree. People always wanted to be around her. So for me, that’s how I’m looking at Mame.”

Herman himself, speaking from his Miami home, found the issue of color silly as well.

“I can’t believe that in 2014 that skin color has any bearing on anything – I really think that it is such a faded and ridiculous subject. I can’t believe that we as a society haven’t gone far beyond this long ago. And Leslie’s gift has nothing to do with her ethnicity.”

Uggams and Herman have had careers in close proximity in the surprisingly small world of Broadway.

“Socially, I met him… when he was doing (his first full musical) Milk and Honey (in 1961). I was taken by my manager the opening night of that show… We’d always meet and say we’ve gotta work together…We’d see each other (at parties) and he’d play the piano and I’d end up singing.”

It was supposed to be an 8-week gig, but it turned into 48 weeks and then moved to Broadway, and a seemingly indestructible life on the road.

In it, she sang the song from Mame, “If He Walked Into My Life,” which quickly became a signature number for her. But she has incorporated something of Herman’s music in most of her extensive concertizing since then. She holds a special affection for two numbers from Herman’s beloved if flawed Mack and Mabel: the bittersweet off-beat love songs “Time Heals Everything” and “I Won’t Send Roses.”

Since then, they have become frequent colleagues. She consulted him about this project in a phone call to his Miami home and he plans to trek to Palm Beach County sometime during the run.

He’s one of her most ardent fans. He said in a phone interview this week that she brings something special.

“It’s a combination of a truly great sound — her voice is just stunning — and she understands lyrics and understand them to the point where you find something new every once in a while in a lyric. But more important than that she’s a very good actress. The combination of that voice and a fine actress is rare, and I’ve used her in so many situations that we’ve become really good friends.”

But it’s just the latest chapter in a career spanning virtually every entertainment platform. Asking a question sets off her effortlessly telling stories: taking acting lessons at age 8 alongside Sal Mineo, winning a weekly talent contest at the Apollo so often that she was hired at 9 years old to appear full-time in 29 shows a week there learning her craft watching Louis Armstrong, Ella Fitzgerald and Dinah Washington; performing “The Lady Is a Tramp” with Frank Sinatra; having Sammy Davis Jr. cook dinner for her.

And, of course, Roots. She fought hard for the role including one disastrous audition in poorly-executed old-age makeup. But few connected to the production realized during the shooting that they were creating a watershed moment in American culture. Its importance finally sank in when the show first aired and she was performing in Las Vegas; the casinos and floor shows shut down during the hours the show was airing because no one was coming.

Today, Uggams is a frequent visitor to this region especially with a steady stream of concerts in venues ranging from perfectly-tuned concert halls to condo auditoriums.

Her presence also signals another step forward in logistics and ambition for The Wick Theatre, now in its sophomore season in Boca Raton. The company has finished an $80,000 upgrade in the sound system – the third upgrade since buying the old Caldwell Theatre. Mame has a large and local cast including Lourelene Snedeker as Vera, Irene Adjan as Gooch, Jim Ballard as Beau, Missy McArdle in several roles including the aforementioned Mama Burnside  and Jeffrey Bruce as Babcock, with direction and choreography by Norb Joeder (the Wick’s 42nd Street) and musical direction by Michael Ursua.

For Uggams, it’s another link in a career stretching more than six decades, but she sees no end in the near future, even tacking on a series of concerts at area condos here before she goes home.

Looking ahead, she’s hoping for a Broadway date someday for Stormy Weather, a show about Lena Horne that she headlined in recent years, breaking house records at the Pasadena Playhouse in 2009 and Prince Theater in Philadelphia in 2007.

“It’s hard to just go to New York unless you’re Hugh Jackman or someone like that. But we have two Lenas, me and a younger one.” She added dryly, “So they are waiting for one these lovely young pop stars to say, you know, I’m ready to do eight shows a week.”

She realizes that some of the younger generations are not as familiar with her work, but she has discovered she has a legacy she didn’t know about. “My body of work is on You Tube. It’s wonderful, even the kids who go, ‘Uh, who are you?’ They Google me and they come back and they go, ‘Oh, my goodness!’ They even have something on You Tube on me when I was ten years old and on Your Shows Of Shows with Sid Caesar.”

But the rush is still there. “I just filmed (the television series) Nurse Jackie and I loved that. But there is nothing like standing out there on stage and listening to the audience reaction right away, yea or nay…. When you do a musical you feel them breathing. There’s nothing like that.”

She never takes it for granted, although she only warms up her voice because the other castmates are doing so. “I’m at the theater two hours before the curtain. I’m one of those people who like to get in there and have my cup of tea. I always read my script every single day to make sure I’m saying the words the writers wrote.”

She concludes, “My adrenaline is always going and I believe the minute that stops happening, get out of the business. Will I remember all the words? Will I remember my blocking? I’m still as excited as the first time I ever was put on the stage.”

(Editor’s note: This story is based on two interviews, one done last week between rehearsals and another on Monday as part of the Spotlight on the Arts television program on BCON.)

This entry was posted in Features and tagged Jerry Herman, Leslie Uggams, Mame, The Wick Theatre. Bookmark the permalink.