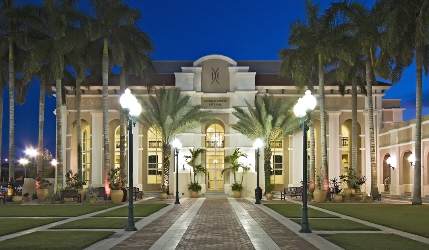 A production of Dreamgirls was already planned for the Miramar Cultural Center’s summer season, but became the perfect “launching pad” for the City of Miramar’s First Annual Broadway Festival of South Florida.

Ellen Rosconi, director of cultural affairs for the City of Miramar explains that as the crafting of an arts grant proposal began, a light bulb went off, and the idea of building a larger festival around the center’s production of the Broadway show was put into motion.

“I thought we could build a larger festival by adding a few distinctive events around Dreamgirls,” said Rosconi, who arrived at the Cultural Center in December 2015 after more than 20 years working on and off-Broadway.

Rosconi said she was able to “draw on the generosity of friends in New York to participate and present opportunities unique to South Florida.”

Just like the contestants who will be belting out showtunes as part of Broadway Idol — the festival’s closer on Sunday night in front of judges and an audience — the Festival is also a way for Miramar to get discovered, and to promote tourism in Broward County through the arts, according to the festival creators.

“We received funding to put on the Broadway Festival,” said Tamika Bickham, Miramar Cultural Center’s Communications and Audience Development Manager. “It’s also a way to introduce Miramar to Broward County residents and provide a robust offering in July when the arts season in South Florida has slowed down. Dreamgirls is definitely a huge focus for the festival, but over three days we wanted to find ways to get more than just those who enjoyed sitting in the theater and watching a performance. We’re bringing Broadway to Miramar, too, as a way to open a door for local talent.”

That’s where master classes and workshops come in.

Before relocating to Florida, Rosconi was the general manager of Forbidden Broadway New York, and during her time with the show from 2001 to 2014, she launched five editions of the musical theater parody. Forbidden was awarded three Drama Desk Awards, received a Tony Honor for Excellence in Theatre in 2006, and was Time Magazine’s No. 1 Musical of the Year in 2012. She hasn’t given up her producer’s hat as she remains general manager of the team’s newest production, Spamilton, at the Royal Theatre in Chicago.

The poison pen behind the skewering of Broadway shows is Gerard Alessandrini, who conceived Forbidden Broadway, and is still involved in all of its incarnations. Rosconi has worked with Alessandrini, and leveraged the working relationship to bring him to Miramar as part of the festival. He’ll lead a master class on Sunday, July 23, on choosing and performing a Broadway song for audition, and will be one of three celebrity judges at Sunday night’s Broadway Idol.

Baayork Lee, who Rosconi has also worked with, is another Broadway celebrity who will be joining Miramar’s Broadway Festival to teach two master classes on Saturday, July 22. Lee, a director, actress, and choreographer, who played Connie Wong in the original 1975 production of A Chorus Line, received the Isabelle Stevenson Tony Award this year. The two master classes she’ll lead will take participants through the rigorous paces of a Broadway dance class. In a second Saturday master class, the ways to impress a casting director are covered by Lee – everything an actor needs in their tool kit to approach a Broadway audition.

“One of the ways to evaluate your skills and to gain confidence is to receive instruction and honest feedback from professional artists working in the industry. I thought bringing Baayork Lee and Gerard Alessandrini might open the industry door to local talent,” said Rosconi. “These aren’t every day opportunities for aspiring artists, to have true masters evaluate your work.”

For the Broadway Idol segment, joining Lee and Alessandrini as a judge will be 2017 Carbonell Award winner Ron Hutchins, who is also the choreographer and director for Miramar’s Dreamgirls.

The festival begins Friday night with Broadway on the Plaza, a free community theater fair. “We want the community to come out and celebrate South Florida as a destination for theater and culture,” said Bickham, adding that arts and cultural groups from throughout South Florida have been invited to exhibit and promote their upcoming seasons.

It’s all a lead up to the grand presentation of Dreamgirls: In Concert starring Jones, who will sing, as the character Effie White, the show’s signature song “And I Am Telling You.” It won’t be the first time for Jones to perform the song in public. She made her rendition memorable, bringing the house down during her run as a contestant on the Fox network’s American Idol in 2007. Don’t be fooled by Miramar’s promotion of the production. Although the show has been billed as Dreamgirls: In Concert, Bickham said audiences will see the full show. “We don’t have sets or costumes, but it’s fully staged and choreographed from beginning to end.”

Jones is also serving as emcee for the Sunday evening Broadway Idol contest. Bickham said the response for singers to be part of Broadway Idol was “great for our first time every doing it.” Performers had to be aged 18 or older, and were asked to send an online video, where they would be singing 30 seconds of their best Broadway show tune. “We had about 40 or so entries, and we could only pick about half because of the timing of how long we wanted the Idol show to run.”
Rosconi said she discovered that there was no shortage of talent throughout Florida.

“We’ve been gobsmacked by the level of talent we’ve found through this process. We believe that through presenting the Festival it’s worth trying some new programming to see how we can best serve the Miramar community,” said Rosconi.

The Miramar Cultural Center is located at 2400 Civic Center Place.