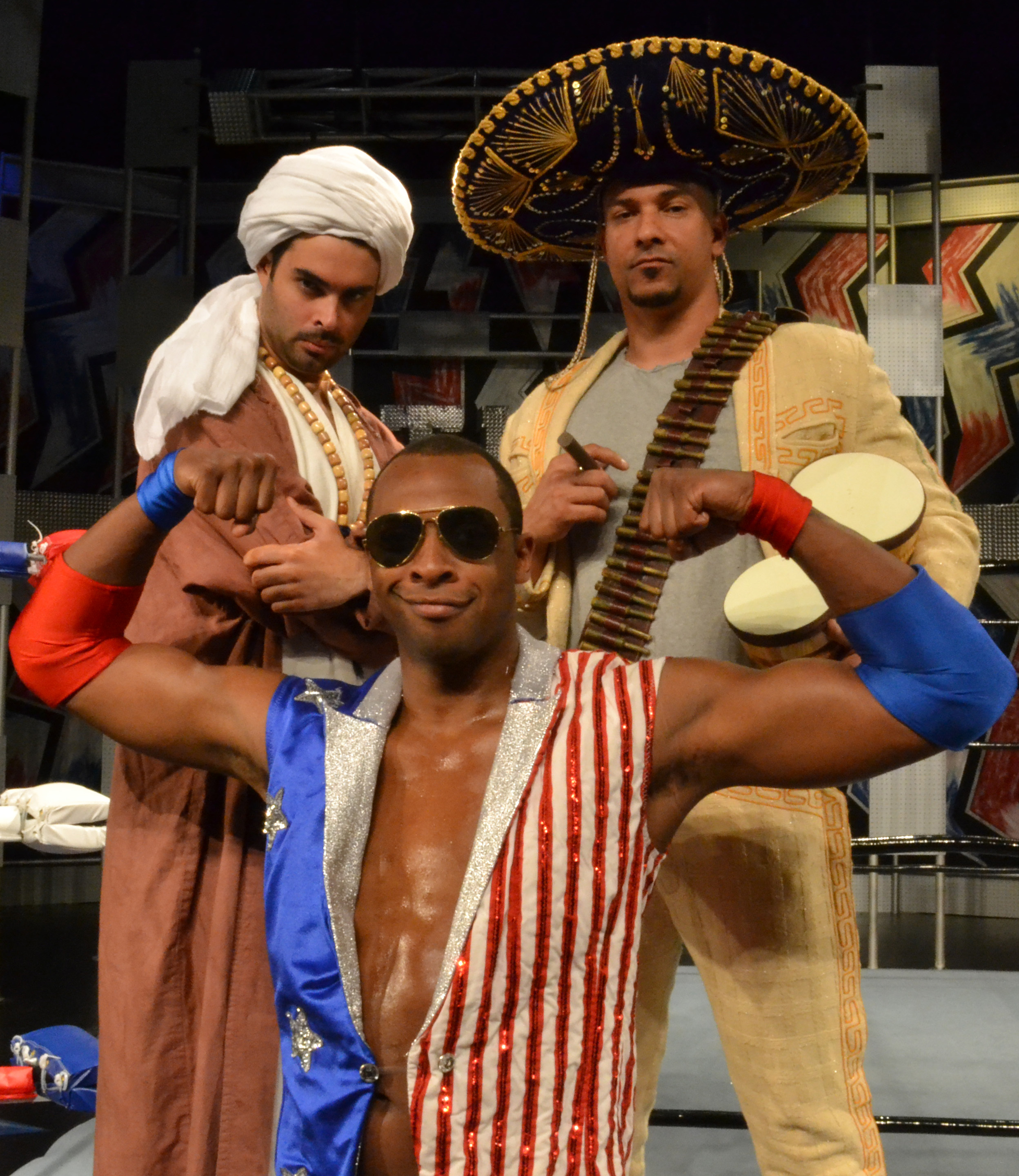 It’s a safe bet that hardly any theatergoer in South Florida will have seen a play like The Elaborate Entrance of Chad Deity when it opens this week at the Caldwell Theatre Company.

After all, rarely do rehearsals require actors learn World Wrestling Entertainment moves that while bogus are actually downright dangerous to the execute. Or where the director is flipped in the air by a burly athlete and lands flat on his back.

Despite the physical pyrotechnics, Chad Deity is a serious exploration of race relations, geopolitics and Millennial America candy-coated in a wicked satire of pop culture, represented here by the flash and fakery of professional “wrestling.”

Artistic Director Clive Cholerton hopes to expose mindless xenophobia on a stage set flanked by huge TV screens and dominated by a real wrestling ring where actor Brandon Morris and most of the cast will be telecast live as their bodies slam to the floor.

Morris seemed bemused by the marriage of thought-provoking themes and staged slugfests. “They tell you on the first page of the script that you can break your neck if you’re not careful,” he said before rehearsals last week.

A comical look behind the buffoonery of professional wrestling may initially seem to lack gravitas, but this Pulitzer finalist script of 2010 by Kristoffer Diaz is balanced with philosophical monologues by Morris’ character, Macedonio Guerra. This streetwise Puerto Rican is playing the villain in the scripted good-versus-evil bouts. But he grew up in love with wrestling; in fact, he’s far better at it than the charismatic blowhard superstar named in the play’s title. It takes skill not to get hurt when Deity seems to be pummeling him.

Mace struggles to score with the fans until he and an Indian-American friend realize what they can achieve by capitalizing on Americans’ prejudices by recasting their ring personas as Middle Eastern terrorists taking on Chad Deity’s 100 percent American. Their scheme succeeds – until it doesn’t.

“We’re hoping it appeals to two audiences,” Cholerton said. “One is the typical theatergoer because it’s about America and racism,” especially how some facets of society exaggerate stereotypes in order to make money (or win political support, it might be noted). But he also hopes it will attract an audience that would never dream of going to theater – at least one with footlights.

Morris hopes it will bring in a younger audience because “there’s a lot of spectacle.”  Specifically, when Deity enters the ring, it is accompanied by the overheated multi-media pomp reserved for rock stars.

A key player in the production is fight coordinator Pablo Marquez, a former professional wrestler who moved to Davie five years ago to teach acolytes at Coastal Championship Wrestling’s Bodyslam University.

Marquez’s life story mirrors Mace’s tale. He also played a fundamentalist Muslim named Babu whose gimmick was to eat gross substances and then pay $500 to a woman in the audience who would kiss him. But physically smaller than the standard WWE superstar, he never became the household name he dreamed of being. Instead, he began wrestling in Japan and Puerto Rico until he became disillusioned.

Cholerton said listening to Marquez’s story taught him “The world of a wrestler is very tough; it’s very reminiscent of an actor’s life. You never know what your next job is,” said Cholerton.

Morris added instantly, “Yeah, it’s like being an actor – with bumps and bruises.”

Morris has never wrestled, but the athletic actor said he’s benefiting from his training as a dancer. “I’ve got a good sense of my body so it wasn’t that difficult to segue.”

The difficulty is that a dancer’s natural instincts are different than the ones a wrestler needs to stay safe. For instance, Mace must climb on someone’s shoulders and then fall backward to the mat. “The instinct is to tense up,” Morris said, clenching his muscles, “but Pablo said you have to relax your muscles or you can dislocate your shoulder.”

The hardest challenge, Morris and Cholerton said, is actually the massive monologues in which Mace confides in the audience. A week before previews, Morris said he was still grappling with the lines.

“The line load is heavier than anything I’ve ever done including the lead in ‘The Scottish Play.’ He’s a street guy, but he’s a very intellectual also. He talks like ‘dis’ then uses words like ‘vehemently’,” Morris said.

Doubling the challenge is that the speeches interweave into one of the most complex shows the Caldwell has done, augmented with live video, pre-recorded video, blaring fanfares and banks of moving lights.

“It’s a nightmare; we have pushed the edge of our envelope,” Cholerton said, noting that Morris’ somewhat bleary mien that day stemmed from a marathon technical rehearsal the night before. “He has 80 different times when he must say exactly the same line in exactly the same rhythm and hit exactly the same marks. You don’t get a second chance…. You have to make it look effortless.”

Given that burden, Cholerton wanted no other actor for the part, to which Morris responded, “Now you tell me.” The director added, “Yeah, it’s good we didn’t tell your agent.”

The two worked together in The Whipping Man in 2009, one of the turning point dramas in the Caldwell’s recent resurgence. “Actually, I wanted him to come back for Clybourne Park” last year, the director said.  But the Miami native, once active in South Florida theater and familiar from a recurring role as an FBI agent on TV’s Burn Notice, turned it down. Morris wants to focus on succeeding in New York. His last local role was in Florida Stage’s production of Christopher Demos-Brown’s When the Sun Shone Brightly in the spring of 2010.

But something about the script and the timing of the offer (it’s cold in New York) clicked for Morris.

His castmates are an eclectic group. Deity, the flamboyant African American with a gangsta persona, will be played by Donte Bonner, a University of Central Florida student who performed the play in Philadelphia; Adam Bashian, recently Sky Masterson at Broward Stage Door’s Guys and Dolls, is Mace’s confederate, Vigneshwar Paduar; local stalwart Gregg Weiner plays the pragmatic and canny promoter Everett K. Olson.

Cholerton snorted. “Two hours? Two days! We need a woman in the cast.”

For an example of their impromptu banter, see this promotional video of an interview by WPBT’s uVu staff.

Taking most of the truly dangerous chances on stage is the fifth actor, an actual wrestler, Matthew Schaller.

Cholerton and Morris are in awe of the bearded brawler.  Cholerton said, “There have been times that Mace kicks him and I’ve thought he really got hit and I’ve stopped everything and asked, ‘Are you all right?’ He keeps saying, “No, really, kick me.”

Morris chuckled. “He came in guns blazing, he’s an animal.”

Cholerton added, “The second day I vowed no one would have to do anything I wouldn’t do myself.” So he tried out some of the falls, an experience enshrined on this uVu video. “But Matt is going way past this. He gets slammed and gets right up without skipping a beat.”

The director’s minimal exposure to WWE wrestling prompted him to take a field trip to a bout at the Bank Atlantic Center with set designer Tim Bennett and lighting designer Thomas Shorrock.

“It was much different than what we expected. There wasn’t anything televised. They didn’t use the mike (for announcements) as much as we wanted.  We wanted to see the spectacle, see how the characters interacted. It wasn’t there. We learned a lot about lighting, but that’s about it. It was a completely different quality of wrestling. John Cena (the buff bald guy on the TV ads) was horrible. The other guys were good.”

The show posed other problems. Because of the need to practice immediately in the ring already erected on stage, rehearsals were held in the open auditorium instead of the cocoon of the large back room which actors and directors prize as a place to experiment. “I felt like I lost my incubator where you explore and find those kernels of moments,” Cholerton said.

What he has produced is a mélange of humor, societal insights and Powerbomb slams.

“It really is unlike anything you’ve seen before.”

A side note: If you haven’t driven by the Caldwell recently, the entire Levitz Plaza to the south including the old parking lot has been razed in preparation for the construction of luxury apartments. A new 167-space lot should be open along with Chad Deity directly to the west the theater in a well-lit easily-accessible location on the other side of the theater’s parking circle.

For more WPBT uVU videos depicting some of the actual wrestling, click here:  1   2   3