It was the voice.

Eighty-eight year-old Samuel Ron heard the stranger next to him mention to his wife that he was having trouble hearing some of the drama about a Holocaust survivor during intermission at Broward Stage Door’s play, A Shayna Maidel.

There was something about the voice. More precisely, the accent.

The stranger, 86-year-old Samuel Klaiman, turned to Ron and asked, “How are you enjoying the play?”

Klaiman’s soft gravelly intonations were like an alarm to Sam Ron, born Shmuel Rakowski. “My ears are always open and I hear people talking, and I know when they are not from the Bronx.”

A few more sentences made it inescapable: They had been in the same forced labor camp at exactly the same time during the Holocaust. They had not known each other among the 5,000 other prisoners, but they shared the unique sights, smells and sounds that persist after surviving a series of ghettos and concentrations camps. They had both survived the 1945 Death March that had killed tens of thousands of people. 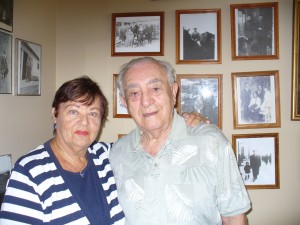 The lights vanished for the second act, but as soon as the show was over, the two men and their wives rushed to the lobby of the Coral Springs theater to discover whether they knew anyone in common. It was Saturday Sept. 2 and the Rons had dinner plans. They invited the Klaimans but they declined in favor of a future date and exchanged phone numbers.

It would seem natural for the two men to avoid a shattering play about a Holocaust survivor who comes to America for a difficult reunion with her sister and father. Especially harrowing is the scene in which the father compares his list of missing loved ones with the woman’s list of the known dead. 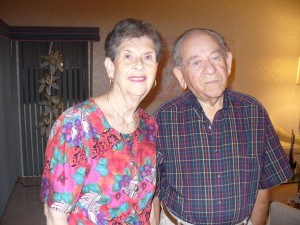 In fact, they sought it out. Both men have spent more than 65 years immersing themselves in the horror. Neither feels they have a choice. In interviews last week, they shared literally hours of horror stories with a clarity of detail that time hasn’t dulled.

Klaiman said he monitors the Jewish television cable station for every Holocaust documentary and then forces himself to watch.

“I don’t miss it. I have to watch everything,” he said last week. “My wife hollers at me because she sees I get depressed. She says stop watching. I can’t stop watching. Why? It’s in me. When I cry, I feel better.”

While he has told his story to Steven Spielberg’s Shoah documentarians and he is a member of the South Florida Holocaust Survivors Inc. (“We used to be 3,000, now we’re 300”), he is not as proactive in spreading his story as Sam Ron.

For Ron, it is even more of a crusade. The bookshelves in the den of his Delray Beach home are filled with Holocaust books. A display case contains the key and a bit of door sill where a mezzuzah had been in his boyhood home. The walls feature photos of his life before the Holocaust including a portrait of his high school class the year before the Germans occupied his town.  He thinks he’s the only one in the picture to survive. “Every photo is a drama in itself,” said his wife, Bilha.

He answered, “People ask, am I depressed (looking at the memorabilia). But the opposite is true. I enjoy to see what a happy childhood I had. I’ve got a good memory. I got a sense of humor.”

His encounter with Klaiman is not unusual. “For 65 years I look in everybody’s eyes and the first thing I asked them is where are they from. I am looking always for somebody that I’m missing all these generations. From time to time, I get an occasion like this where I meet somebody. It feels good that you found somebody. It brings up memories, but it feels good.

“There was a time when we didn’t talk about it (to other people), we only talked among ourselves. When we told jokes, we would just tell the number.” That referenced the concentration camp ploy of assigning a number to a joke and then saying the number rather than the joke.

Klaiman, too, has had a chance meeting. Two month ago, he was attending a social gathering after synagogue services in Sunrise Jewish Center when he discovered another person who had been with him in the Buna subcamp of Auschwtiz — another of the six camps that Klaiman had been in.

But even though there were only 150 people in the building, they did not recognize each other. People were so young and so emaciated that the likelihood of recognizing each other today is small. Besides, many people were referred to only by the blue tattoo, Klaiman said, pulling up his left forearm to expose the figures B-553.

That number is especially important to Klaiman. His father received B-552. When his father failed to respond to his number during a roll call, the older man was beaten as Sam was being taken out to work. “He called out to me, ‘Son, son, son, they are taking me away from here.’ So I came back for a second, kissed him and where they take him, no one knows.”

Klaiman thought he was dead. He had already lost his mother, grandfather, two younger sisters and brother. Months earlier, in a ghetto away from the camp, he had a chance to get on a truck to go to a work detail where he thought he’d find his father, then held in a different location. His mother gave her blessing.  Before he could return to her, the Germans marched thousands of residents from the ghetto to a train. He found out years later, it went to Treblinka.

His voice quavered and stumbled. “We found out that from there you cannot escape from Treblinka. There was no work. Some very few people smuggled themselves out.  They told people in the capital that Jews are coming by the thousands and are being gassed every day.”

As adolescents, both men worked at the munitions factory in Pionki but later were moved in and out of concentration camps across eastern Europe. Each has a lengthy litany of tales of atrocities they personally witnessed: mass executions, dogs attacking sick people, gypsies – fellow prisoners—beating the new arrival of Jews then disappearing the next day into the gas chambers, and the Death March when the Germans evacuated nearly a hundred thousand people in a winter time procession to move prisoners deeper into Germany as the Allies closed in.

The two Schmuels, grown into young men, were freed from the march by troops at the end of the war in May 1945.

Both went on separate exoduses to find their families. Klaiman was told his father was in Stuttgart a few days before the young man was slated to be relocated to England; he travelled 200 miles to join and care for his father. Klaiman moved to the Bronx in 1949, then to Detroit where he worked in the car factories and met his future wife, Marilynn. He worked as a fruit seller, sold bleach to supermarkets and worked as a glazier before moving to Florida to ensure his father’s health in 1982.

Ron found both his parents. He wandered Europe working for refugee groups, facilitating legal and illegal immigrations for many months, including carrying a boy on his back across mountains from Czechoslavakia. Eventually, he chaperoned a boatload of immigrants to Palestine. He lived there 10 years, serving in the Army and working on a kibbutz where he met Bilha. They moved in 1956 to Canton, Ohio, where some of his family has been living since 1904. His father had relocated there years earlier and begun a construction company. Ron worked in the family business until moving to Florida 10 years ago.

Throughout, Ron has never stopped telling his stories. He told the tales to a relative who collated them in a wire-bound book, he wrote articles for newspapers, he spoke in a locally-produced documentary Life After the Holocaust: Survivors Rebuild Their Lives and he penned a chapter along with 35 other survivors about their experiences. And unlike many survivors, he has returned to Poland several times, once taking his wife on a tour of virtually every place he had been.

So it was not unusual for him to be in the audience at Stage Door’s A Shayna Maidel.”

Stage Door co-founder David Torres saw the two couples leaving their seats and overheard a snatch of references to concentration camps. After they left, the box office staff told Torres what Bilha had told them. They figured out the men’s names from the seating chart and contacted them.

Stage Door Executive Producer/Artistic Director Derelle Bunn was touched and amazed at being indirectly responsible for the reunion. “I’m honored that of all the theaters in the U.S., in Florida, they would be, in the same week, on that performance, in the same row. It’s like six degrees of separation.”

Sam Ron took it in stride. “I live with that. I’m happy. I have no problem with that. Some of my friends would not see this (play). But I’m not a very emotional guy. I have my feet on the ground. So I’ve been through this many times.”

Sam Klaiman was less sanguine. Attending the show was a duty of sorts.

“All the things that happened to the Jewish people…. There are not enough words to say how people suffered.” He touched his forehead. “I feel like I’m there right now. I cannot forget this. It’s impossible….  When I get up in the morning, it’s in me. It’s there when I go to sleep. When I’m talking to you now, it’s in me.”

This entry was posted in Features and tagged A Shayna Maidel, Sam Klaiman. Bookmark the permalink.