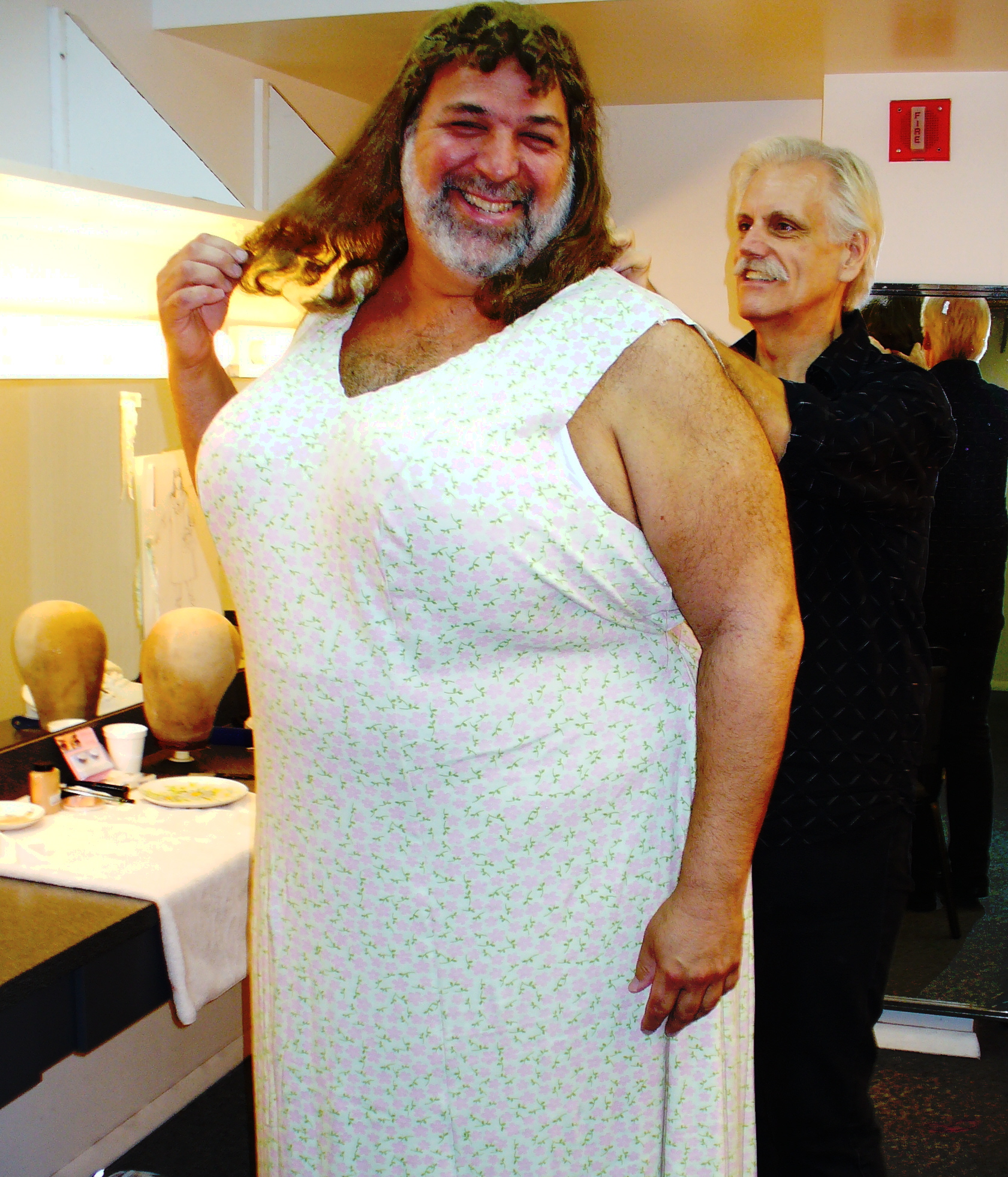 Arisco demurely bats his eyelashes in response and dons a dishwater wig of stringy locks that falls to his shoulders with a come-hither toss of his head. The salt-and-pepper beard to be shaved off a week later is hardly the only element working against his femininity.

Tillman’s handmade ensemble comes with ratty house shoes but Arisco is eyeing a pair of formal heels that will add another two inches to his frame.

“I’ve been walking around in heels, for practice,” he says proudly.

He’s a bit apologetic that his body hair peeks out from the dress’ cleavage and sleeveless design. “I’m going to have to shave my arms, and there,” he says, pointing to an area between his pecs.

It’s five weeks before Arisco steps out on the stage of Actors’ Playhouse at the Miracle Mile Oct. 12 as Edna Turnblad, the dowdy agoraphobic mother in the hit musical comedy, Hairspray. He’s pretending to primp and preen in the third-floor dressing room in yet another of numerous ongoing fittings of Tillman’s designs in progress.

Like Divine in John Waters’ 1988 film and Harvey Fierstein in the 2002 Tony-winning Broadway musical, Edna here is being played by a very large and inescapably male actor.

For all the joking, Arisco says, “You have to play the comedy straight. You want to be careful not to be a caricature. You don’t want big eyeliner until the end when he’s dressed up. He’s not a drag queen.”

Both stories center on Tracy Turnblad, a plus-size teenager in

Baltimore in 1962 who dreams of dancing with the Barbie-and-Ken teens populating a clone of American Bandstand. Along the way, her ebullient personality wins her a slot on the show, prompts her to lead a protest to allow black kids on the show, sparks a riot, lands in jail and wins her the love of the handsomest teen in town, all while reinforcing that body type should not equate with a sense of self-worth.

But the other key character is her mother Edna, who is tall, overweight and speaks in a bass register.  Tracy biggest reclamation project — in several ways — is her mother.

The musical’s story is cute, far less subversive than the film. But it has one of the best faux-1960s rock scores ever written, penned by Marc Shaiman and Scott Wittman.

“I thought about doing the show when I first saw it on Broadway. It’s just a joyous show. Tracy transforms so many people in this play with her naivete, her energy, her colorblindness.”

And as far as him taking on Edna, he said impishly, “ I thought the theater could use a jolt of something different.”

Aside from the emotional and thespian challenges, Arisco must undergo a significant physical transformation. Some of that is accomplished about two weeks later on Sept. 14 when he shaves his beard off for the first time in years.

“I had not shaved the beard since I did A Thousand Clowns in 1996.  Well, except for one Halloween about 10 years ago when my wife and I were Fred and Wilma. Wore a wig and started growing back the beard the next day.  That probably doesn’t count,” he wrote in a later email.

As he sliced off the beard this time, he thought, “Damn that’s a lot of face,” and  “Crap, I’m going to have to wear a lot of make-up.”

Turning Arisco into Edna is a major challenge for Tillman, a veteran 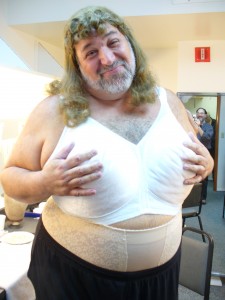 designer whose resume includes several years at the Coconut Grove Playhouse. He must  design and build seven full outfits for Edna including body padding and a huge brassiere.

But there are 24 other actors who will wear 70 wigs and 180 costumes. Some Tillman will build, others will be pulled out of the Playhouse’s bottomless close of past costumes.

At this point in early September, he has invested about a month and half of significant research into clothing of the period and dozens of sketches, some of  which cover the mirrors in Arisco’s dressing room, which is littered with bolts of material. The fabric could not be found by haunting area stores, so Tillman discovered them on a trip to Los Angeles.

There were challenges not usually taught in design school. “I had to find underwear for Dave. It’s not a petite thing. I searched online but found it locally,” Tillman said.

While Tillman isn’t copying the work of the legendary Tony-winning designer  William Ivy Long from the Broadway production, he admits being “inspired” by Long’s instantly iconic outfits because “the audience that has seen the show has come to expect a certain look.”  Like the music, Long’s designs affectionately satirized the era and were instant sight gags whenever a character entered in a new outfit.

The role also puts unusual demands on Arisco. First, he is directing the piece as well which requires choreographer Barbara Flaten to double as co-director, the technique they used when Arisco played Tevye in Fiddler on the Roof.  For instance, it’s nearly impossible for someone acting on stage to know when the pace of the overall show is zipping along correctly.

Second, Arisco was an actor before he was a director, but his roles these days are separated by years, not months.  A lead in a major musical poses serious physical demands, he acknowledges, and his last major role was Tevye seven years ago. “The question is stamina (for) dance and vocal. I’ve been working with a trainer. I can stand up in the heels without using my arms” top balance. 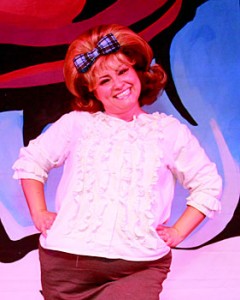 strong cast in support. Tracy will be Joline Mujica, a University of Miami graduate now working in New York and who has played the part twice, thereby speeding up the rehearsal process.

Playhouse stalwart Julie Kleiner (recently in In the Next Room and The 25th Annual Putnam County Spelling Bee)) plays Penny, Tracy’s sidekick who is liberated by rock ‘n’ roll to the point that she falls in love with black dancer Seaweed to be played by Ronald Duncan. Other well-known names include local chanteuse Avery Sommers as Motormouth Maybelle who runs a record shop “on the wrong side of the tracks;” Kim Cozort (God of Carnage) as the snooty TV show producer Velma; Celia Merendi as her even snootier and snottier daughter; Sally Bondi, just off a tour de force turn in ‘night Mother, will perform the multiple parts of the Female Authority Figure; and Matthew Ragas plays heartthrob Link. 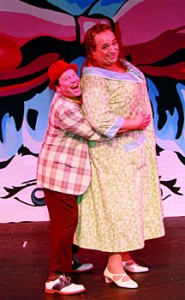 been Avi Hoffman playing Edna’s supportive husband, Wilbur. A highlight of the script is their second act duet and dance number, “You’re Timeless To Me.”

It’s a unique moment in the show. At no other time can the actor playing Edna acknowledge the cross-casting; he has to play the character and situations for real. Arisco said. “But the dance is the one time, we can wink at the audience. It’s that Mutt and Jeff thing. It’s what the audience has been waiting for all night.”

The key, Arisco insists, is playing his character has to be a real woman.

Then he gives a slight shrug. “She’s just a little larger than life.”