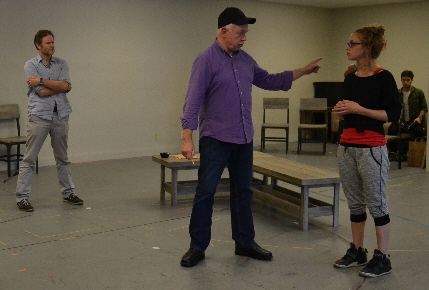 The same carefully chosen adjective emerges in separate interviews with the two leading actors and their director to describe Equus, the shattering drama they are rehearsing for an opening this weekend at Palm Beach Dramaworks.

Peter Simon Hilton, who plays the emotionally conflicted child psychiatrist Martin Dysart, added in an interview in another room, “It’s a very raw play and that is not just in the emotional commitment that the characters have to have. And it’s not just the boy, because that’s obvious, but everybody is being pulled apart, and not just Dysart. Everybody is lost.”

The play is a kind of why-dun-it occurring when Alan is assigned to Dysart for treatment. As Dysart probes Alan’s past, he discovers that the boy actually adores horses to the point that he has created fervent religious-based adoration of them as gods. He has been struggling with a conventional blue collar father who is an atheist and a religiously-obsessed mother. As the doctor has Alan recreate the events leading up to the explosion, he must decide if and whether he can “cure” the boy by robbing him of delusions more pungent and fulfilling than anything Dysart knows.

Dysart, fretting that he cannot be remotely as passionately abandoned as Alan, comes to the realization of the crime, “The extremity is the point.”

Peter Shaffer’s 1973 highly stylistic, emotionally ravaging play was a massive hit in London with Alec McCowan as Dysart, later a Tony-winning smash in New York with a list of actors starting with Anthony Hopkins, and a curious but somewhat effective 1977 film with Richard Burton.

Shaffer, who later wrote Amadeus, drew the idea from a brief article that a friend had seen in a newspaper about a real-life incident.

Played mostly on a bare stage with a few benches, six lithe actor/dancers wearing silvery masks outlining horse heads as ever-present witnesses and a protracted scene of nudity, Equus is rarely done in regional theaters despite having a superb script.

“It does not get done often,” said Hilton, an experienced Shakespearean actor last seen at Dramaworks in Arcadia and at Maltz Jupiter Theatre in The Audience and Frost/Nixon.

“I think it gets done in colleges, and I think it gets done where people don’t have to worry about their bottom line because it’s a big cast and it’s a big play….. And so, when (the director) approached me, I felt… I mean, I just grabbed it. I said, ‘Absolutely, I’ll make this happen. I’ll juggle things around to come and do this play because this is a chance in a lifetime to be part of it, inside it’….. But it’s also a tough play and it’s a beast of a play.”

Director J. Barry Lewis, who also used the word raw, does not plan to reinvent the piece, instead digging deep into the material and perhaps highlighting how this 45-year-old work resonates so strongly in a 21st Century punctuated by news headlines about profoundly disaffected youth, stunning explosions of violence, a society influenced by commercialism in pop culture, repressive attitudes toward sex and a half-dozen other elements. 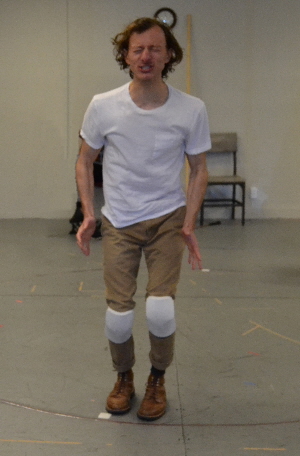 Maier, an unconventionally handsome young New York actor, is jazzed about the script because “the play doesn’t give you any answers, which I think is really great.”

While the fresh-faced actor is in his 20s, “It’s definitely a role I obviously won’t be able to play forever because it’s a 17-year-old boy, and I don’t think there are many roles that are this challenging for young actors.”

The challenge is getting inside Alan’s mind without taking sides. “If I judge what he does, I can’t fully do what he does in the play.”

The challenges are equally daunting for Hilton. He said of the fallout across the community after the event: “Everybody is walking around like a zombie; they have no idea how to recover from this….The psychiatrist, who is an expert in child psychiatry, he’s reached a point and a pinnacle in his profession where he is lauded by all his peers, and everybody says that he’s the best, it’s put him on this big pedestal. And he comes across this case and it literally, it stops him in his tracks. He doesn’t know how to advance himself even as a human being.”

Hilton’s voice takes on the desperate timbre of Dysart’s voice: “He says that it’s not actually the boy, it’s the horse. (He says)  ‘I can get inside children’s heads, but I can’t get inside a horse’s head.’ So when this boy comes to him and he seems to be half-horse, half-boy, he (Alan) seems to have taken in this self-created god and speaks through him. And I think that that’s where Dysart can’t actually understand or use his own craft because he can’t read what a horse thinks and what it’s trying to do.”

The dilemma is that “He can take away his madness. He can sanitize him and pop him out into society, so he’ll sit there and be a good boy, and then subsequently a good man, and sit there and pay his taxes and put money on the” race horses. “But, what has he done? He’s taken away something extraordinary… . He envies Alan Strang because he has ridden…. You are quite literally saying to yourself that I can never achieve something as this boy is achieving. And that achievement is, as far as the rest of the world is concerned, to be mad and be horrible. Because the passion is not just the riding of the horse and taking on this primitive God. It’s also stabbing horse’s eyes out.”