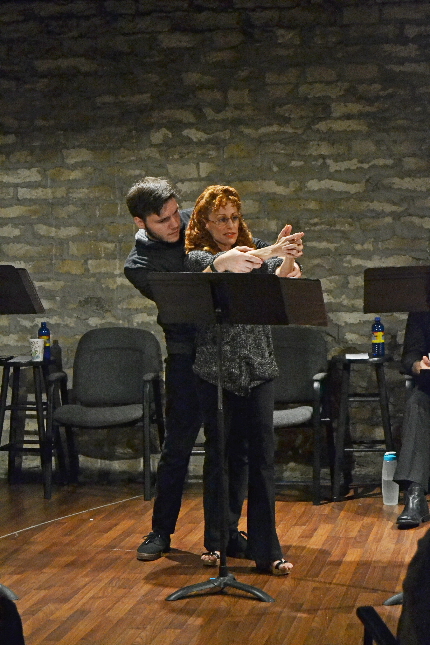 Theater companies can put on shows, produce works already out in the public domain, and continue to entertain their audiences. Revenue is created from ticket sales and through fundraising and all seems to work quite well. If you talk to William Hayes, producing artistic director of Palm Beach Dramaworks, that business model works OK for a while anyway, but it doesn’t do much to support a theater company’s sustainability.

What does, however, is the development of new works, but there’s more to this process than meets the eye. With The Dramaworkshop, the company and Hayes are looking to the future of how to evolve a regional theater company. They’ve established a developmental lab, The Dramaworkshop, at its downtown West Palm Beach location, renovating the upper level of its Don and Ann Brown Theatre on Clematis Street for a black box theater to stage new plays that it has steeped in developing so that audiences may participate in the experience. However, that’s only part of the equation.

“I’m a medium-sized organization,” explains Hayes during a conversation in his executive office just steps away from the theater’s Mainstage. “Where will my revenue be coming in from in the next five years? That’s a consideration. Well, it has to be from additional sources: costume rentals, from an inventory of plays that are out in the world and getting royalties, and a small percentage of those royalties coming from the playwright and that go back to Dramaworks. Developing new plays hugely raises our national profile as a national organization because our name is getting out there as a regional theater that is developing works.”

The Dramaworkshop began in 2014, but only now is it ready to host its inaugural developmental production, Jennifer Fawcett’s Buried Cities, which opens April 8. Three more staged readings and workshops will be part of Dramaworkshop’s premiere season.

Productions will be in the newly renovated Studio Theatre. Hayes obtained a $500,000 facility grant from Florida for the renovation. Mark Perlberg, who former chairman of the Board for Dramaworks, and his wife, Diane, donated $250,000 in exchange for the space being named the Diane & Mark Perlberg Studio Theatre.

When Hayes first approached his board of directors about the Dramaworkshop idea, he said he needed a certain amount of dollars to get it started. “At the time, I determined I needed $400,000. The board was concerned I would tap into our current donor base and they wanted new money coming in. I understood their position.”

Hayes wanted it to be exclusive, so he was only seeking eight contributors who would become “permanent founding producers.” If he could get $50,000 donations from eight donors, he’d make his goal.

He recounted that he started meeting individually with board members just to talk about the initiative. “I was excited about it and wanted to share my enthusiasm with them. Well, several of them liked the idea so much, they all said they wanted to do it.”

In one month, he had raised the $400,000 without even approaching any new donors.  He was off and running.

He hired Susan Gay Hyatt as Dramaworkshop Manager, who had spent seven years at Florida Stage as the director of creative education. He created a group of local theater artists who, in essence, would become his literary department. “There are about 20 of them that are veterans of Dramaworks and I’m making them permanent resident artists. It’s a lifetime position because I want to give that back to people who helped build this organization.”

The artists, mostly actors, read original plays that are submitted during November and December. Florida residents do not have to have an agent, but works from playwrights from out of state have to be submitted by an agent. “You know if they have an agent, there’s quality there,” Hayes said. This year, Dramaworks received 200 scripts. “So the resident artists read the plays and then fill out an analysis.” The artists get paid a small stipend for their time.

As part of Dramaworks’ evolution, the company also remodeled a 4,100-square-foot space at 1750 N. Florida Mango Road, about three miles away from its main building, as a costume shop and rehearsal hall. Hayes hired Brian O’Keefe as resident designer and costume shop manager. With the new space, the Mainstage, and the new Studio Theatre, Hayes proudly says Dramaworks now has three facilities.

In yet another way to bring national attention to Dramaworks and its Dramaworkshop, in 2017, the company will host The National Playwright and Producer Forum. “We started working with the Dramatist Guild Fund and they decided to partner with us for this conference.” The focus will be on female playwrights and the industry. “There is really a national conversation going on about how seldom female playwrights are produced….” He has yet to select a keynote speaker, but says he has received some “highly qualified and successful” suggestions from the Guild, all female.

The conference will also include workshops, various forum discussions, and a way to showcase various theater organizations throughout Florida. Hayes says he feels like Palm Beach Dramaworks has more of a responsibility to make “things happen” for regional theater now in Florida. “Ten years ago, we had four regional theater companies in the county – Florida Stage, Caldwell, Maltz, and us. There’s a responsibility of developing new plays because there are fewer opportunities for playwrights otherwise and we have fewer regional theaters throughout the country.”

Fawcett says the opportunity afforded to a playwright through the West Palm Beach company’s developmental lab is priceless. During a two-week workshop last May, Fawcett worked with a company of resident artists and Hayes, the director of the workshop, to help realize her play.

There was something even more remarkable Fawcett says about the experience. Hayes had known of Fawcett’s work while developing plays with Julia Hansen, artistic director of Aspen’s Theater Masters for a developmental play festival entitled New Bridges Fest, a collaboration between Theater Masters and Palm Beach Dramaworks. The festival purpose was to give playwrights, mainly those who had recently graduated from college or were in master’s programs a chance to get their work seen. “Jennifer emerged from that,” says Hayes.

He had remembered her and had hoped to have a chance to work with her again. “I decided to break my rule about submissions in this case because I thought Jennifer would be perfect for The Dramaworkshop. She has the right work ethic, she is a collaborator, and she knows how to sit around a table and have a discussion and not lose control of her play.”

So Hayes contacted her to see what she had in her kit bag that she might want to develop.

“I told Bill that I had a play that wasn’t finished, but that I could finish it for him if he wanted to put his trust in me,” says Fawcett about what became a two-act play after the work done at The Dramaworkshop. “I’ve had other developmental organizations who were interested in the play tell me, ‘Call us when you’re finished and we can talk.’ But Bill was willing to say, ‘Let’s do this now!’ and that doesn’t happen often.”

When she arrived last May she had the first act written. For two weeks, she would work with the actors and director for about four hours. “The rest of the 20 hours of the day in a workshop situation the playwright is madly trying to write as much as possible to bring in fresh pages.” That’s typical, she says, of the process for development, but what isn’t the norm is having “four actors for two weeks and the fact that Dramaworks was willing to support that process and invest money and time into continuing to develop a play.” In her experience, new play development is usually a weeklong workshop at the most. “Often it’s less than that; sometimes only three days.”

The playwright says it offered her the chance to work with people who “end up having a deep knowledge of the piece. The actors were able to lie in these characters’ shoes and the conversations that we would have and what we were doing would affect the writing,” she says.

She’ll now get a chance to see the play staged in front of an audience in April with sets, costumes, and lights. The audience will be asked for feedback in talkback sessions. “It remains, however, a work in progress,” says Hayes. “We’ll see what works and what doesn’t work – is the dialogue working, does it seem natural, is the audience getting the theme, is it clear or convoluted, are the characters fleshed out enough?”

The play is about an expectant couple that is traumatized during a home invasion. Their reactions in the aftermath of being held at gunpoint test their marriage. Fawcett says the initial impetus of the play was the idea that “for one person the only way to feel safe was with a gun, and for the other the only way to feel safe was without a gun. It puts them in an impossible situation.”

Past readings have involved Amadeo, Ballard, Lowe and Joe Farrarelli. For the developmental production, David Nail will be playing the role played by Ballard who is appearing at GableStage this season. Irene Adjan will sit in for the ailing Lowe.

Buried Cities will benefit from the feedback and the time spent with The Dramaworkshop. “In my mind, a play is never done. You can always keep refining and refining, like any thing you’re making a piece of jewelry or painting.”

“What it does for me is it says to other theaters that there was a company that believed in the play and in the playwright. My work gets taken more seriously because they look at it like ‘another organization has decided that this play was worth their time and worth their money,’ ” says Fawcett.

And the credibility reflects back on Palm Beach Dramaworks, too, Hayes says. “It helps the city of West Palm Beach – that we’re developing new work in the hub of West Palm Beach in a place that’s usually not thought of as a central hub for culture. Over time, it is going to help the city and will bring all kinds of people in the industry here to pay attention.”

He also knows that his audiences want to be part of the process of the development of new works. “Palm Beach Dramaworks audiences are an intellectual audience. They are smart, they want to respond. This is an audience who will get a real charge out of feeling like they were responsible for helping to develop new works.”