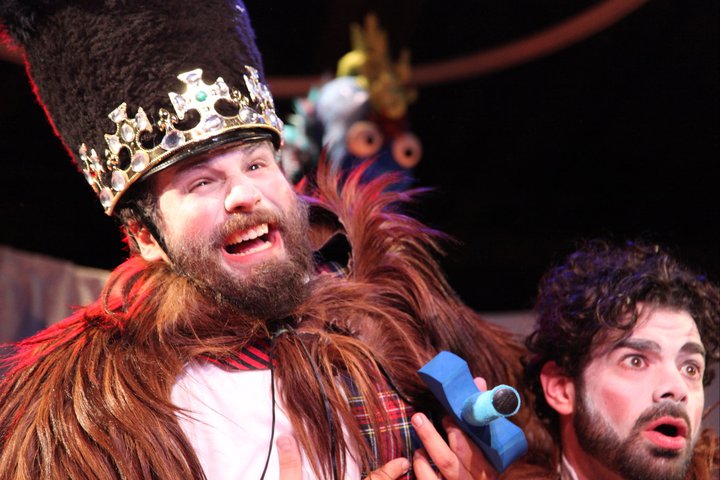 The very idea that Mad Cat Theatre—the embodiment of edgy, adult fare in South Florida – is doing what some might misclassify as children’s theater simply doesn’t compute.

The explanation is that Macbeth & the Monster is not some rose-colored Disney fairy tale, even though a mother reinvents the Shakespearean tragedy as a bedtime story for her son.

Angela Berliner’s play opening Dec. 28 is very determinedly designed to appeal to all ages, starting with the fantasy, puppetry, battle scenes and copious comedy for children and ramping up a sophisticated examination of social and ethical questions for the adults in the audience.

“It’s the time slot!” joked Mad Cat co-founder Paul Tei who is directing the show. “What were we going to do? White Christmas?”

Speaking from his home base in Los Angeles, the expatriate Floridian said, “I never wanted to do kids’ theater, and I don’t just want to do Shakespeare. But when the opportunity comes to meld all these worlds, my background in puppetry and pushing the envelope of what you haven’t seen us do….”  His voice trailed off as if giving a helpless shrug. 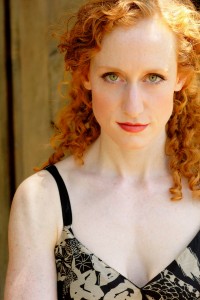 Berliner said Macbeth and her three other Shakespeare adaptations echo the ethos of Stephanie Ansin, the artistic director of  Miami Shores’ PlayGround Theatre, namely that “children’s” theater should not be dumbed down pablum, but challenging theater with just as much intellectual and dramatic rigor as “adult” theater.

“Most children’s theater sucks. Do you think kids deserve sh—y theater?  I’m writing for people to be entertained and enjoy it on different levels” said Berliner in a phone interview from Los Angeles where she runs the L’enfant Terrible troupe.

At the same time, she has tried to make the pieces intriguing for all audiences. “A lot of my audience here are childless adults.”

The multi-generational approach is key, she said. “The original Macbeth is very cool for kids; it’s fantastical, it has battles and is action-oriented, the cool stuff. I think the adults can get into it more because of the family story and the psychological story of a woman who’s a narcissistic mother, and in the telling of the story, she sees outside of herself.”

Tei first saw the hour-long Macbeth work with the other three pieces last summer at Berliner’s theater and plugged into it immediately.

Tei, who is famous for joyously tweaking noses along with the status quo, said that while the show will certainly appeal to children, some patrons are not going to appreciate a holiday show devoid of cotton candy.

“I imagine I’m going to have parents who are pissed off,” he said with relish.  “To me, if you’re pissing some people off with your work as an artist, you’re doing something right. The last thing I want is a family to walk out and forget they’ve even seen it. I want people to walk out and agree or disagree or go ‘Holy s—!”

Even more, he hopes to start a dialogue between the generations about some of the more serious issues that the play asks about war, Shakespeare and a host of other topics.

Those themes evolve out of a simple plot. A little boy is feeling lonely and in need of loving attention. His dad is absent and although his mother says the father is at war overseas, it is implied that he may be dead or has simply abandoned them.  The boy reaches out by asking his mother to tell him a bedtime story. The mother, feeling embittered and disconnected even from the child, chooses to tell him a scary story, a radically re-imagined Macbeth that reels out on the stage. During the story, the mother begins to reconnect with her son.

“It reuses the play Macbeth as sort of a symbol, but it’s not a retelling of Macbeth,” Tei said.

If Berliner’s vision of the play seems to hinge on the mother, Tei sees it a few degrees differently. “It’s really a metaphor of a guy going off to war. It’s very much an anti-war play. It raises the question what good is going off to fight a war if it tears your family apart? It’s also about greed and what happens people get too much power.”

With puppets. And singing.

Tei plans to have the three witches (puppets in Berliner’s version) be a multi-ethnic girl group like a cross between the Andrews Sisters, the Supremes and Destiny’s Child. Their lines are being set to original music. On the other hand, Banquo and Duncan (real actors in Los Angeles) will be shadow puppets with voiceovers by Stephen Anthony and Ken Clement.

Macbeth will be played by Mad Cat stalwart Joe Kimble who will sometimes use stuffed animals as scene partners.  The mother will be played by another Mad Cat regular, Erin Joy Schmidt, who is seven months pregnant in real life.

Berliner is fine with different interpretations: “Paul is not doing the same production, which is great. I love see to what other people will do with it.” 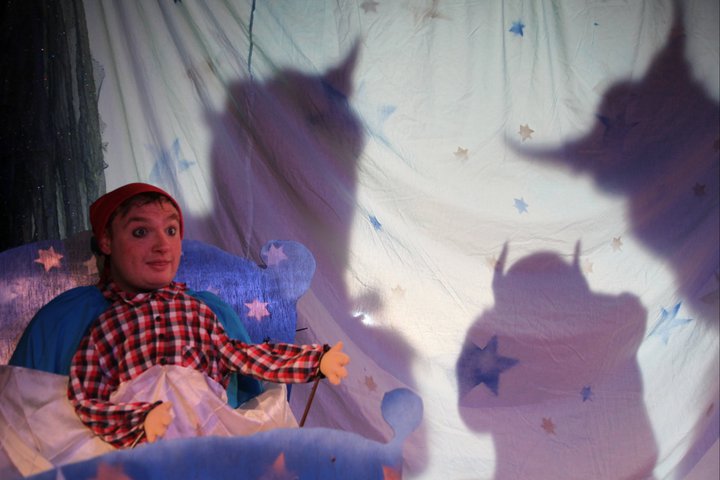 This entry was posted in Features and tagged Macbeth and the Little Monster, Paul Tei. Bookmark the permalink.