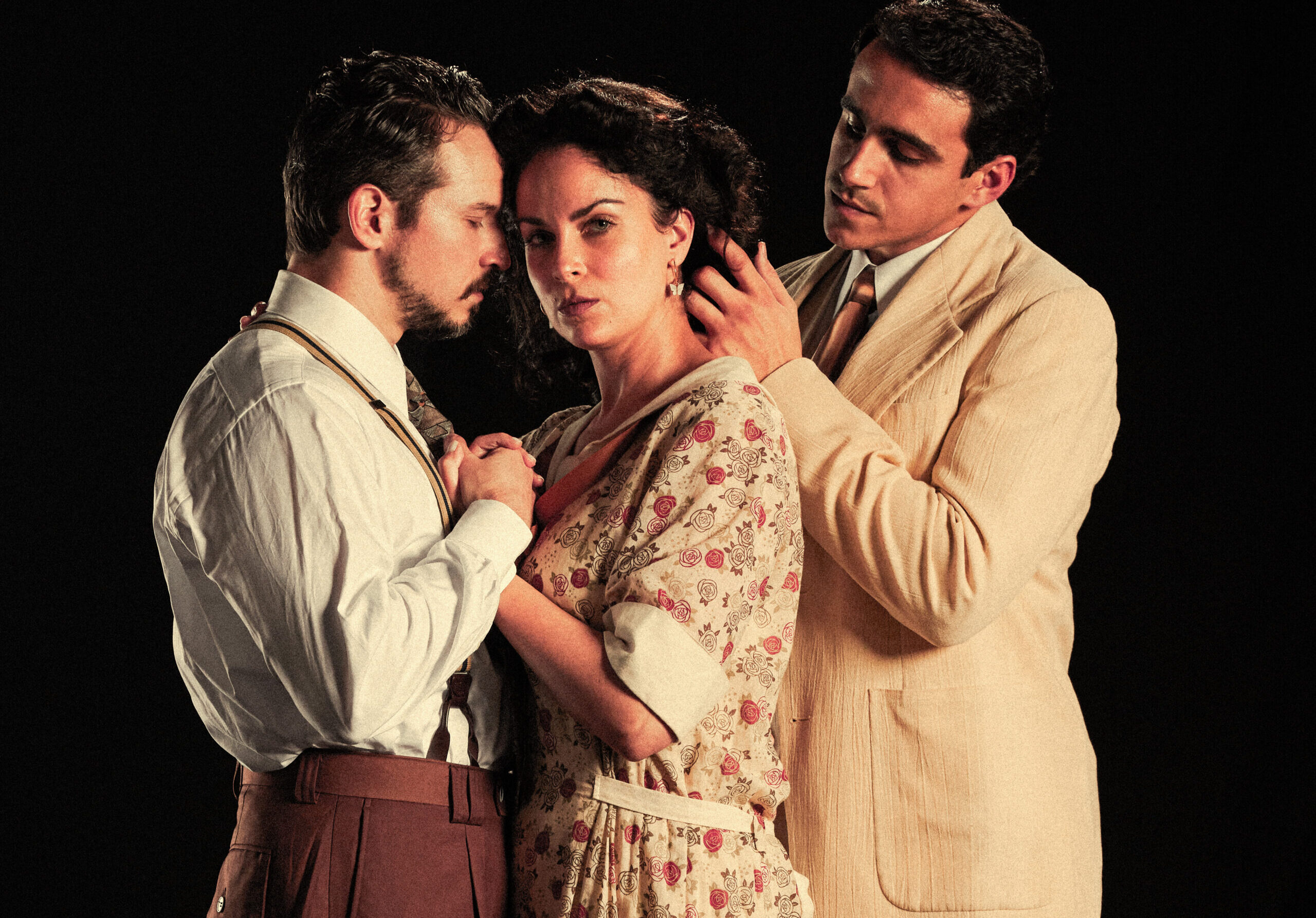 The stunning play that altered the course of Nilo Cruz’s life began with a commission from the 104-seat New Theatre in Coral Gables.  Supported by a national grant, the company led by Rafael de Acha asked the Cuban-American playwright, whose work was being produced by significant regional theaters throughout the country, for a new play.

Cruz delivered Anna in the Tropics.

After its world premiere in October 2002, the play won the prestigious American Theater Critics Association/Steinberg Award in April 2003 and, two days later, the Pulitzer Prize for drama.  Thus, the artist who had arrived in Miami as a nine-year-old on a 1970 Freedom Flight from Cuba became the first Latino to win drama’s highest honor, taking his place in history and being elevated to a higher-profile career.

Anna in the Tropics has now turned 20, and in celebration, Miami New Drama is presenting a new production in its home at the Colony Theatre on Miami Beach’s Lincoln Road.  As he did at the Coconut Grove Playhouse in 2004, Cruz is directing his piece about a family of Cuban-American cigar makers in Ybor City near Tampa in 1929.

“It has been a long journey with Anna in the Tropics. It completely transformed my life,” says Cruz, who eventually moved back to Miami from New York.  “It brought international visibility to my work, and also allowed me to write screenplays, operas, and oratorios.”

Produced at Broadway’s Royale Theatre in late 2003, Cruz’s prize-winning play has been staged not just throughout the United States but in numerous countries, including Germany, Spain, Belarus, Cuba, Canada, Japan, China, the Philippines, Ecuador, Puerto Rico and three cities in Russia.

The last is particularly significant because Anna in the Tropics is inspired in part by Leo Tolstoy’s great Russian novel Anna Karenina. Cruz’s play honors the then-waning tradition of the lector, an educated person who would read everything from newspapers to novels aloud as the workers repetitively toiled.  Once the playwright decided Tolstoy’s tragic love story would be the captivating, influential book the lector was reading to the Ybor City workers, his passionate play coalesced.

Set just as the Depression and the push for modernization were looming, Anna in the Tropics uses Cruz’s poetic, image-conjuring language to explore the lives of its extended Cuban-American family.

Patriarch Santiago (Serafin Falcon) and his wife Ofelia (Saundra Santiago) are the cigar factory’s long-married owners, given to bickering but still in love.  Their restless elder daughter Conchita (Hannia Guillen) and her husband Palomo (Brandon Espinoza) are at odds, in part because of his string of affairs.  Conchita’s younger sister Marela (Andrea Ferro) is dreamy, playful, and imaginative.

Santiago’s half-brother Cheché (Daniel Capote) is trying to gain more power at the factory as he struggles with the loss of his wife, who ran off with the previous lector.  So when the handsome new lector Juan Julian (Gabriell Salgado) arrives literally fresh off the boat from Cuba, Cheché sees an enemy, while the women are enraptured.

“Nilo is such a specific writer. He lives in a temperature different from mainstream America. He really knows how to navigate this world… he’s a great director,” says Miami New Drama cofounder and artistic director Michel Hausmann.  “Anna in the Tropics is such an umami of flavors:  funny, sensual, poetic.”

In September, Anna in the Tropics made unwelcome headlines when Miami-Dade County Public Schools informed Miami New Drama it would not bus high school juniors and seniors to the Colony to see special performances of the play.

The conflict over age-appropriate content has since been resolved, Hausmann says, and three groups of public school students and one audience of students from private schools will see the play.

Cruz found the short-lived controversy painful and ironic. “This is the city where I grew up, studied, and fell in love with the theater – of all the cities in the world,” he says. “Anna in the Tropics has to do with the power of words. It’s significant to do Anna at this moment in time when books are being banned. The play embraces literature.”

That’s a good thing, Cruz says, but so is revisiting an existing play, exploring it with fresh eyes and different actors.

“I wanted this cast to be a sexy cast – elegant, sensorial,” says Cruz, who has worked with three of the seven actors multiple times.

As he does when he stages a play for Arca Images, a smaller bilingual Miami company where he serves as artistic director, Cruz loves to explore a play – even one as successful as Anna in the Tropics – with his cast in the rehearsal room, taking in the ideas of each actor.

For instance, he is seeing Cheché in a new way because of what Capote is bringing to the role.

“In the past, he was played more as an angry man.  He was devastated because of his wife leaving with the previous lector,” says Cruz.  “Through Capote, I see more of the pain in him. The solitude, the sadness. He wants to be loved.  Capote brought that, and I said, ‘I love it, let’s use it.’ It’s a lot more profound.”

Central to the play is the life-changing relationship between Guillen’s Conchita and Salgado’s Juan Julian.  The words he reads from Anna Karenina spark her imagination and desire, and they begin an affair.  Their lovemaking isn’t depicted in the Miami New Drama production, but the imagery conjured by Cruz’s words is vivid, passionate, and powerful – its own kind of literary achievement.

“Anna in the Tropics at the Coconut Grove Playhouse is the first play I ever saw. It dawned on me then that I wanted to be an actress, that I wanted to transport people,” says Guillen, who later met Cruz through their mutual mentor, Teatro Prometeo founder Teresa María Rojas. “Nilo has been a blessing and a gift, a miracle… A lot of people try to do what is hot now, what’s trendy.  He believes in his craft, what he brings to the world.  But he remains humble.”

Guillen, who was born in Cuba and moved to Miami with her family at age 11, has appeared in multiple Cruz plays (including a 2011 Spanish-language El color del deseo/The Color of Desire directed by Hausmann in New York), but this is her first production of Anna in the Tropics. This cast, she believes, “is in tune with Nilo. It’s a magical connection with his text.”

Salgado, a 2019 New World School of the Arts grad who made his professional debut as the Creature in Zoetic Stage’s 2021 production of Frankenstein, has become one of the region’s most in-demand actors. He’s far younger than most who have played the lector (Jimmy Smits, now 67, starred as Juan Julian in the 2003 Broadway production), but Cruz believes Salgado has all the qualities needed for the part – plus an undeniable chemistry with Guillen’s Conchita.

“Gabriell is a very, very elegant actor. He has a sense of the language, a lyricism, and a sensuality. He is the quintessential gallant man – un galán,” says Cruz, who sees fire onstage between Salgado and Guillen. “He’s timeless. He is a theater creature with all the tools to deliver on his promise.  I don’t see the age. I see a brilliant man, gifted in the same way Mozart was when he was composing at an early age.  That intelligence has no age.”

Salgado acknowledges that chemistry with Guillen and believes she embodies the qualities in Cruz’s writing. At first, he found the playwright’s style to be “the most unique writing I’ve ever encountered.  It’s the most poetic, and its spiritual component and magical realism excite me.”

Working with the author as director is also a new experience.

“He has such a confidence and a fluidity. He’s in his territory, on his playground.  He’s such an incredible person, so kind, fascinating and extremely generous,” Salgado says.

Santiago, who grew up in Homestead and graduated from the University of Miami, and Miamian Falcon play the older generation. Both have a host of theater, television, and film credits; Santiago is arguably the best-known actor in the Miami New Drama cast by virtue of her role as detective Gina Calabrese on Miami Vice from 1984 to 1990.

“Anna in the Tropics was on Broadway at the same time I was doing Nine with Antonio Banderas,” Santiago recalls. “I went to see Daphne Rubin-Vega (the original Mimi in Rent), who was playing Conchita, and I was blown away.  I played so much attention to what she was doing and thought, ‘Oh, this is a good part for me.’ And now I’m playing Ofelia.”

Santiago has played powerful women and matriarchs in a number of shows, including Mama Rose in Gypsy, Amanda in The Glass Menagerie and the title role in Evita. Ofelia, she says, “keeps the factory running. She is always checking up on everyone. She loses her temper, has her faults, gets drunk. But she’s a typical matriarch, doing the best she can.”

Falcon wasn’t familiar with Cruz or his plays when he was hired to portray Palomo in a production of Anna in the Tropics in 2010 at California’s small Sierra Madre Playhouse near Pasadena. He was the only Cuban-American in the largely Mexican-American cast, and he remembers marveling at the script the first time he read it.

“I thought, ‘What is this? This is my family’s history.’ My grandma and her siblings were all cigar rollers in Cuba,” he says.  “This is the fifth production in which I’ve been directed by Nilo. When he calls and says, ‘I want you to do this for me,’ I jump at the opportunity to work with him.  It’s like life being breathed into me.  Theater isn’t the best-paying medium.  But what it has done for my soul I can’t express in words.”