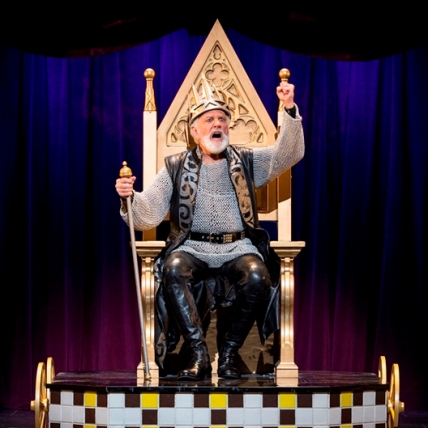 Déjà vu is inevitable for John Rubinstein as he portrays the father of the title protagonist in Pippin revival’s national tour coming to the Broward Center next week. After all, Rubinstein created the young man’s role in his Broadway debut 42 years ago.

So while he’s on stage acting in one show, another one sometimes nibbles at his consciousness.

Rubinstein is not quite resistant to new interpretations such as this 2013 circus-infused reboot by director Diane Paulus (Hair and in Miami The Donkey Show) . But it’s impossible for him to escape memories of the 1972 original imbued with a ribald, nose-thumbing vibe by director and choreographer Bob Fosse.

“I do bite my tongue every now and then,” Rubinstein said in a telephone interview last week from Greenville, S.C., the first spring-like stop of a series of one-week sitdowns this year in snowy and frigid climes.

“I love the show; it has in it so many memories for me. It’s not just the show itself, of having done it for two years, of being in the original team that put it together, and working with Bob Fosse and (composer) Stephen Schwartz and all the people on it.”

But now at 68 with his long curly locks gone white and cut short, he plays the supremely pragmatic Charlemagne of the Holy Roman Empire, trying to cope with the naiveté and idealism of his callow son, Pippin, played by Sam Lipps. 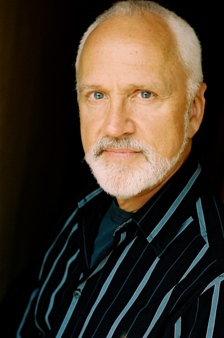 “A chance to be in it again is just fantastic. It’s sort of like coming home in a certain kind of way.”

Rubinstein, an accomplished composer and son of famed concert pianist Arthur Rubinstein, likened it to hearing a recording of a Beethoven symphony while growing up. “And you’ve listened to it a million times. Now you go to a concert and they’re playing that Beethoven symphony and they’re playing it…. ah, the first movement is a little too fast and the solo there holds that note too long and you relate everything to the way you think it should be based on your exposure to it. Now that doesn’t mean you’re right about it.”

The contrast was reinforced recently during a promotional interview at a radio station. He had performed in the revival on Broadway for three months and had been with the tour since June. But when the interviewer played the original cast recording with Rubinstein’s rendition of Pippin’s big introductory number “Corner of the Sky,” something new hit him. 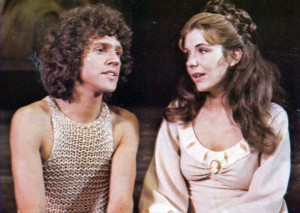 Rubinstein and Jill Clayburgh in the 1972 production

His 25-year-old self was singing it “about twice as slowly as that song is played in our show (now) and… I suddenly realized: I liked it so much better that way. It’s a lilting beautiful yearning sort of song about wanting to find your corner of the sky. And the way we do it (now), it’s a big up-tempo number and that poor guy who’s doing (the number in the tour), he’s driving it and he doesn’t have any time to have any phrasing with it…. So, yes, I do have those feelings: ‘It was better the old way.’ ”

Which is not to say he isn’t enjoying the tour and his new colleagues, “all these young fellas I’ve played opposite. I don’t feel that about them; they’re creating it completely different than me; they are completely different kinds of animals than I am, or I was then. It’s just a different experience of the show and I love it just as much as I love the old one.”

The 1972 original was an unusual situation in itself. Schwartz (best known then for Godspell and with Wicked way in his future) had taken an old college project and worked with bookwriter Roger O. Hirson to track the worldly education of Pippin, a fictional version of a real medieval person. Schwartz’s pop-borderline-rock score produced at least one AM radio chart hit when “Corner of the Sky” was recorded by The Jackson 5.

Once Fosse came on board, he overhauled the charming material until it became a darker, sexier morality tale in which a troupe of medieval strolling players tell the audience the Pippin tale, headed by a Leading Player tailored to the song-and-dance talents of the then-emerging star Ben Vereen just off Jesus Christ Superstar.

The creative team feuded until Schwartz and Hirson were virtually exiled. The initial critical and audience reactions were mixed. But the show eventually caught fire in part because it was reputedly the first Broadway production to use extensive television advertising showing scenes from the show and because the original cast album caught the imagination of a new generation of Broadway theatergoers seeking themes and music that spoke to them rather than their parents.

The production won five Tony awards, including two for Fosse as director and choreographer, plus Vereen and Tony Walton’s set designs

This new version which opened in 2013 won Tonys for best revival direction, Patina Miller as the Leading Player and Andrea Martin as Pippin’s feisty grandmother Berthe.

The show, which has become a resilient staple of high schools, community theaters and regional theaters, endures in part, Rubinstein believes because “the music is sort of irresistible; (the show is) charming, it’s funny, it has a feel to it that is different from the slightly older-fashioned Broadway book shows… It gets people’s energy up.”

It’s a topic he’s had decades to think about. “But mostly, basically, it’s the universal story that we all go through whoever we are, the thing that we wake up at some early age and we say, ‘Wait a minute, I’ve only got this life. This is my road, this is my shot. I’ve got to make something of it… I have to do something that’s meaningful…. I want to feel extraordinary through this one ride through life.

“And then they set out on their life’s journey and they run into this and they run into that, and they have this wonderful experience and they have this terrible experience, and finally they arrive at a place where their journey (is) more complicated, has more of a multi-level aspect to it than they thought it would when they started out when they thought they were going to kick ass. I think we all go through it.”

Rubinstein has had a low-key but arguably kick-ass career in a variety of media. His extensive stage work ranges from appearing as the Wizard in Wicked (like Vereen) to Stephen Sondheim’s only straight play Getting Away With Murder. He owns a Tony and a shelf of other awards for portraying the teacher of the deaf in 1980’s Children of A Lesser God.

He has recorded numerous audiobooks including at least 18 of Jonathan Kellerman’s Alex Delaware mysteries. Scores and scores of television appearances include co-starring with Jack Warden in the 1984-86 series Crazy Like a Fox and a recurring role as Meredith Baxter’s irresponsible husband in Family. He composed several scores for movies including The Candidate and the Sydney Pollack/Robert Redford film, Jeremiah Johnson, composed with his close friend Tim McIntire.

But for Broadway aficionados, Rubinstein is still cemented in their minds with Pippin, which he seems to remember vividly. As a result, Rubinstein has never been shy about expressing his opinion of the show. For instance, the ending.

During initial rehearsals and the tryout in Washington, D.C., Pippin is stripped of all his wealth and trappings when he rejects the troupe’s invitation to commit a spectacular suicide. The hero who once sought extraordinary accomplishments is left on a bare stage with his new wife (played by Jill Clayburgh) and adopted son Theo. She asks him, how do you feel? And bookwriter Roger O. Hirson has Pippin say, “Trapped…. but happy.” It went over well with critics and audiences.

But when Fosse got the show to Broadway, he feared people would feel it was too sentimental. So he had the last line be “Trapped.” Hirson and Schwartz were furious and Rubinstein was uncomfortable with the downer ending. So were the critics and audiences. Rubinstein spent nearly two years trying to inject as much optimism in that finale as possible.

After the first national tour, Schwartz and Hirson regained legal possession of the licensing script and changed the ending back to what had been.

About 14 years ago, a director in another revival suggested a third ending and the writers loved it, Rubinstein said. That’s the version most high schools, colleges, community theaters and regional theaters have done for the past decade. Briefly, (spoiler alert) Theo starts to sing “Corner of the Sky” and the troupe of strolling players try to tempt him into the same traps as Pippin fell into.

Rubinstein does not hold back, although he says it with gentleness, “It was a completely new and different and in my always extremely humble opinion, wrong, wrong as it could possibly be. And to me, of the three it’s by far the worst.”

Then he undercuts the sentiment with a self-deprecating laugh that reflects the joy he’s having in the show: “And I do it every night with all my heart.”

This entry was posted in Features and tagged John Rubinstein, Pippin, Stephen Schwartz. Bookmark the permalink.