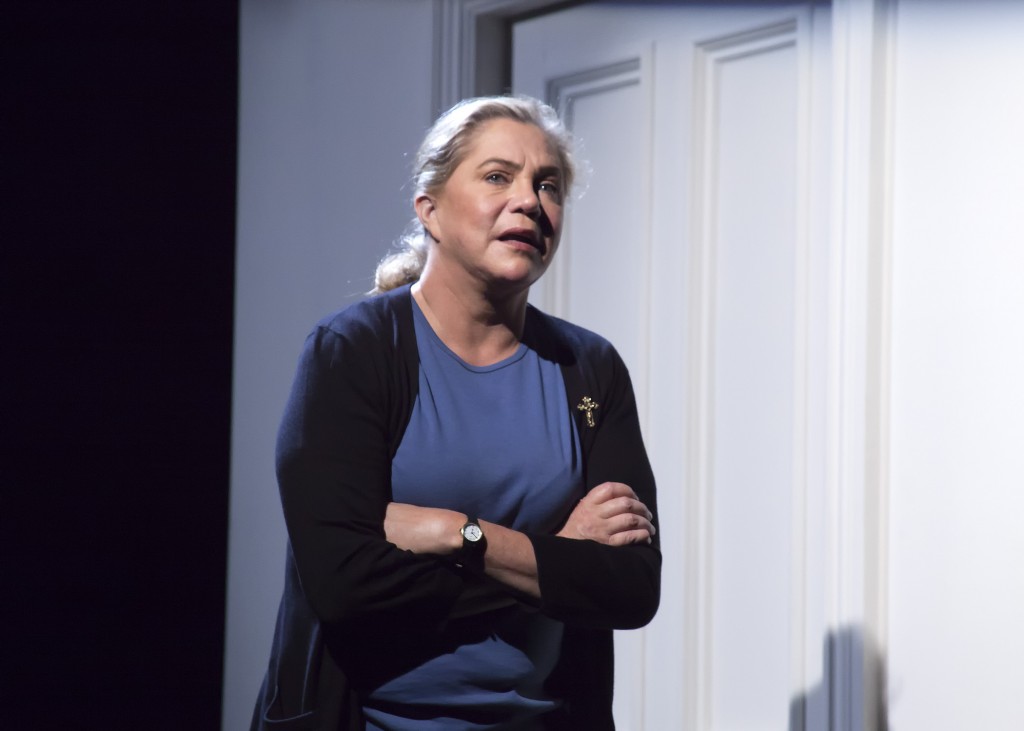 Kathleen Turner doesn’t shy from acknowledging that her devotion to the play High, a harrowing look at the world of addiction, is somewhat rooted in her own battle with alcoholism.

“I think I have some information,” she said with wry understatement on Tuesday, the day before she opens the play at the Parker Playhouse in Fort Lauderdale. “I certainly was abusing alcohol when I was fighting RA (rheumatoid arthritis.).”

It colors her bravura performance as a foul-mouthed Sister Jamison Connelly, a recovering alcoholic trying to rescue a young meth addict ordered to attend a faith-based program.

That devotion has meant standing by the drama written by part-time Fort Lauderdale resident Matthew Lombardo even after it was savaged by critics in New York and closed after eight performances last April.

“We were all convinced that this it wasn’t enough, that this play still really needed to be done. We really believed in it,” Turner said by phone while being driven from a TV interview en route to scout out the physical layout of the Parker.

It wasn’t an easy choice after the drubbing. The iconic film star of Body Heat and Romancing the Stone had known nothing but success in her previous New York stage appearances such as Who’s Afraid of Virginia Woolf.

“It really hurt; it felt like somebody had kicked me in the head. Nothing like that had ever happened to me before. I wanted to go to bed for a week,” she said in that distinctive voice that has sent writers to their thesaurus or scouring their imagination for metaphors.

She and Lombardo were stunned because the play had received critical kudos and broke box office records when it premiered at Hartford Stage months earlier and then in shakedown runs in Cincinnati and St. Louis.

Both blame a lackluster commitment from the producers who didn’t advertise the Broadway bow very well despite its opening amidst the glut of pre-Tony Award competition.

The show was also slammed in New York with accusations of sensationalism, she said. The meth addict “gets high and strips because these drugs make you sexually aggressive and I think that’s been played up too much (by critics). You know, that’s America — we’re against nudity but we use almost naked women to sell beer. It’s a hypocrisy.”

Still, the play resonated for Turner who drank copious amounts of vodka through the late ‘90s and into the middle of the last decade to cope with a crippling case of rheumatoid arthritis. She preferred the buzz to the fuzziness that came from the pain medications she was being offered. “Being in chronic extreme pain is extremely difficult to live with. It creates behavior you excuse yourself for because you are suffering so much,” she said.

But while she never got drunk while working, the problem grew to the point that she once fell down in public and blacked out. She had to take charge. “I was determined to find out exactly what this meant, how much danger I was in. I’d rather that I be as informed as I can be rather than let it slip up on me.”

Turner went to a rehab clinic and even tried an Alcoholics Anonymous group, but neither worked well for her other than giving her the information she needed.

Several things did help, starting with an insightful doctor and new medications for the arthritis. “First of all, getting better worked a lot. That gave me the space to draw back and ask is this (behavior) constructive or destructive, and if it’s destructive, let’s not do that. That was huge.”

She also had strong support from family and friends. “If you don’t have your own support system in place (Alcoholics Anonymous) can help you to build one and I think that’s essential. I had a loving husband and a wonderful daughter.”

Eventually, she cut back her consumption, although she still occasionally has wine with dinner – in moderation. She said, “I haven’t had to go back down that road, thank goodness.”

But the scars of that period, eight years earlier, resonated in her mind during the talkback sessions after High performances in the pre-Broadway tour, comments that fueled her determination to take this show on a national tour, first to Boston last December and now Florida.

“There was this outpouring; it was almost like a running a confessional,” she recalled about the talkbacks. “The stories poured out (from the audience) about their mother, their father, their sister, their son, their friends all caught up in the destruction of addiction of their lives. It made me feel two things: One, I was very ignorant of the extent of addiction in this country and, two, I was extraordinarily blessed that I have had no loved ones who went down that road, because it seemed to me like everyone’s life, so many people’s lives were infected by these addictions.”

Turner flew into Florida Monday after finishing a run in the biographical play, Red Hot Patriot: The Kick-Ass Wit of Molly Ivins at the Geffen Playhouse in Los Angeles. Turner chose the piece because she felt a kinship with the late outspoken liberal columnist who shared Turner’s activism on issues ranging from family planning to women’s rights. “I was having a ball doing it. People were just yelling and one person came up and said, ‘This what we needed! This is food!’  ”

She still does film and television roles, but she has thrived on theater since her Broadway triumph in Cat on a Hot Tin Roof  in 1990. “I’ve never went more than two and half years without doing Arena Stage (in Washington) or Long Wharf (in Connecticut) or somewhere because I love it and I never want to lose my skill or get afraid of (theater). I saw that happen to a lot of stage actors (who went into film) and I never wanted that to happen to me,”

In fact, her current film, the indie A Perfect Family is slated to play the Miami International Film Festival on March 8. In it she plays “this woman who desperately wants to win this Catholic Woman of the Year Award from her archdiocese because it carries with it a prayer of complete absolution, and there is a mortal sin in her past that she hasn’t confessed…. The problem is that part of the way they judge the award… is the family, and, of course, her husband is a recovering alcoholic, the daughter is a pregnant lesbian, and her son left his wife —  not your ideal Catholic family.

“I don’t know why this is my year of Catholicism. I’ve never done any Catholic characters before and now I’m doing two in a row.”

After the Parker, Lombardo is negotiating for Turner to take High on several more stops around the country. She also has hopes of taking the Ivins play to Washington, D.C., around election season.  Turner isn’t slowing down a whit.

“It’s lovely to be 58 years old and be a hard working actress.”