Magic Planned For The Maltz’s Beauty & The Beast Is Puppetry 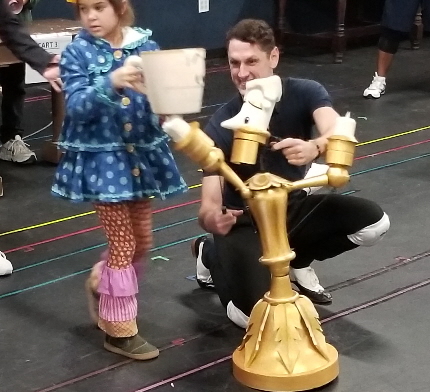 When the musical Beauty and the Beast works, theater magic flows from the stage. But it’s been done so often – a long run on Broadway, multiple national tours, the original animated film and a live action version – the challenge facing producers, artists and audiences is how to reinvigorate the magic.

About a year and half ago, a vision began to take hold in the imagination of Maltz Jupiter Theatre Producing Artistic Director Andrew Kato. What if the enchanted household objects – a candelabra, a clock and the rest destined to become human again by the finale — were not actors dressed in anthropomorphic costumes, but instead actually were the objects – represented by puppets.

The human characters like Belle, the Beast, Gaston, LeFou and company would interact directly with the talking-singing-dancing objects operated by puppeteers visible to the audience in the style of Avenue Q and Warhorse.

He contacted an old friend, actor-director John Tartaglia, the original Princeton and Rod in Avenue Q, a former Lumière on Broadway, and in recent years the creator of numerous live and televised puppet-centric productions such as ImaginOcean.

Kato hooked back up with Puppet Kitchen, the New York-based company that designed and built the shadow puppets in the Maltz’s The King and I and creatures for The Wiz.

The result opens Nov. 27 in what is not is meant as a reimagining of the basic Disney show so much as a revitalization.

“Everybody has seen it and done it,” Tartaglia said. “So part of the reason why this was really appealing to me was that it wasn’t just ‘Let’s do another production of the musical.’ Let’s do it in a way that you’ve never seen it before.”

So you will see young Reese Lores holding the teacup puppet of Chip emoting with actor Brendan Malafronte crouched behind a one-yard-tall recreation of the candelabra looking very much like the image created by Disney animators. You will see Zach Nadolski as the Beast doing battle with a phalanx of puppets as ravenous wolves.

But Tartaglia stresses, “The one thing that we did not want to do was a puppet show. It’s just like you would use a costume or a mask or wig to help the character come to life… It only makes sense because they’re enchanted and they’re objects.”

Whatever the creative team has figured out for the big production number “Be Our Guest” will test everyone including choreographer Shannon Lewis. “How do you get a four-foot napkin into your kick line? How do you get a room of teacups to do a soft shoe?” Tartaglia said.

“So there’s a lot of elements if you’ve seen the show before that will feel wonderfully familiar, but it kind of adds a different dimension,” Tartaglia said.

While not a darker version, his vision weaves in a more emotionally serious layer because the puppets have a more visibly life-or-death stake because you can see a human behind them, accessorized in dark period costumes like shadows of what they were and hope to become again.

“When they sing ‘Human Again,’ you know it makes sense because you’re seeing who they wish they could still be,” Tartaglia said.

“It’s been really hitting us in the rehearsal room how many themes in the musical are so relevant to what we’re going through right now:  It’s fear of another person. Being misunderstood. Wanting to find true love in so many different forms… not just true love romantically but love of yourself, love of community, love of your family. “

It’s still an acting challenge for the puppeteers, said Brandan Malafronte who has played Lumière on cruise ship revues. “We are essentially their soul and you see the actors (acting). We’re not just hidden puppeteers; we are the characters’ essence acting through these puppets. You’ll see us behind them. We do all the singing. We are acting fully behind them.”

Two key challenges: How to make audience forget they are watching puppets being operated by visible actors? How actors playing the humans can make credible to the audience that they believe they are talking with what are obviously puppets?

The solutions are rooted to some degree in the skill of the puppeteers. Some of are experienced hands like Paul Louis of MNM’s Avenue Q and Wesley Slade who won acclaim for his Hand to God at GableStage. Others either have some unheralded experience like Laura Turnbull as well as ensemble members whose dance training was molded into puppet choreography.

“It’s a double skill,” Tartaglia said. “It’s the skill of the human actor to believe so much in what they’re doing that you believe it, but it’s also the skill of the puppeteer bringing the puppet to life in such a way that feels humanistic.”

But the real challenge is when human characters have to act with the puppets. Tartaglia, who went to work for Sesame Street at age 16, recalled some the show’s guests, “There’s a lot of great amazing actors who are brilliant actors but cannot buy into the puppet. And if they don’t buy into it, you don’t buy into it.”

In Avenue Q, the puppeteers could interact with other puppeteers and even look or play off the human actors. But “the live human actor… could never look at us (the puppeteers). They had a look at our puppet characters…. It can be kind of you know for an actor to take a little bit to get used to that.”

Eric Wright, co-founder of Puppet Kitchen, was first contacted about a year ago and began building the puppets about six months ago. While there are perhaps a dozen major puppets, smaller creations and puppetry-inspired effects are infused throughout the show.

Their appearance is original, but to a degree the designers had to echo the Disney animators’ creations because audiences will expect some of the iconic images, Wright said.

The project has been a labor of love for Tartaglia who counts his time as Lumière on Broadway in 2006 as one of most enjoyable assignments of his career.  He wasn’t born or raised in South Florida but it is a kind of second home because his mother, the acclaimed Angie Radosh has acted down here for decades.

In addition to a Tony Award nomination for his work in Avenue Q, he originated the role of Pinocchio in Shrek the Musical.  He has created, executive produced and starred in his own preschool series Johnny and the Sprites for Disney Junior, earning eight Emmy nominations. He currently stars as Kip on Jim Henson’s Word Party and Hank in Julie’s Greenroom (starring Dame Julie Andrews). His directorial credits include The Secret Silk, an original musical he wrote that plays on Princess Cruises; national tours of Dinosaur Train Live, Sid the Science Kid Live, Claudio Quest, The Wizard of Oz, Annie and Tarzan.

After nearly a quarter-century as professional, his eyes still light up as he describes the magic that theater still produces in a multi-media world – magic he hopes will be evident in Beauty and the Beast.

“People need to escape. I think that’s why fairy tales exists. That’s why films exist. That’s why TV exists….  I think right now with our crazy world that we live in, we need that kind of escapism. And with its more serious undertones, Beauty and the Beast is a show that actually is meant for the entire family, he said.

The fusion of puppetry and theater is a reminder that neither art form is dying despite frequent predictions.

“It’s looking stronger than ever… because it’s one of the last like you know communal things that we do, where everyone is invested together for the same reason and everyone’s looking ultimately for the same thing, which is to be transported.”

This entry was posted in Features and tagged Beauty and the Beast, John Tartaglia, Maltz Jupiter Theatre, Puppet Kitchen. Bookmark the permalink.