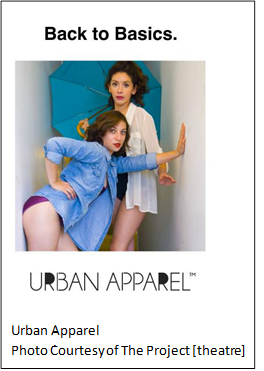 But when it comes to selling cool, Miami’s Urban Apparel offers an experience that can’t be found at the likes of Urban Outfitters and American Apparel.

That’s because Urban Apparel is not just a store – it is theater, the latest offering from Miami-based The Project [theatre], which specializes in “immersive theater” for its audiences.

“The store is a living, functioning store,” said David Hemphill, Project [theatre]’s artistic director who is also directing Urban Apparel. “This store is our set.”

For three years, the Project [theatre] has taken their brand of theater into many different spaces – bars, art galleries, even hotels. Urban Apparel is their biggest undertaking, with support from the Knight Foundation, and the Adrienne Arsht Center for the Performing Arts of Miami-Dade County.

For Urban Apparel, they selected an empty retail space in the Ultramont Mall in downtown Miami and turned it into the hipster retail store that also serves as their set and stage. The audience doesn’t sit and watch the show unfold – they are customers, browsing through racks and observing the interactions between Urban Apparel’s “employees.”

“What we try to accomplish is encouraging people to engage with the story,” Hemphill said.

The audience is Urban Apparel’s customers. As they browse the store’s merchandise – all of which really is for sale, before and after and throughout the performances – they watch the stories unfold between Urban Apparel’s employees.

To stock the store, Project [theatre] teamed with local designers and boutiques. Urban Apparel’s “lifestyle associates” are actors. The store’s employees are “a tight-knit, quirky family,” said Jackie Rivera, a Project [theatre] co-founder and marketing director who plays 6 (yes, her name is a number) who has been with Urban Apparel for eight of its 10-year existence.

6 is responsible for Urban Apparel event ideas, like Bring Your Fish Shopping Day, where customers can bring their fish to the store and their owners leave them in a tank to play with other fish. “She’s just this bundle of joy,” Rivera said.

The actors helped develop the story, a process that took about two-and-a-half weeks, Hemphill said. It starts as improvisation, and the script develops from there.

But every show is different. “The actors have a lot of leeway and a lot of freedom to make it their own,” Hemphill said. “Ultimately it’s their show.”

And that adds to the excitement, for the actors and the audience. Reaction to their performances “[has] been really positive,” Rivera said. “More positive, in fact, when things tend to go awry.”

“There’s something very sexy about the danger of something going wrong,” Hemphill said.

That helps draw in people who may not otherwise spend an evening watching actors onstage. Said Hemphill: “Some of our favorite people who come to our shows are people who never go to the theater.”

Urban Apparel runs through Dec. 22 at 112 SE First Street, Miami, in the Ultramont Mall. 9 p.m. Thursday-Saturday, 6 p.m. Sunday. Tickets are $30 in advance and $35 at the door. Buy tickets or get more information at http://project-theatre.com/apparel.html.

To view a video about The Project (theatre), click here.

This entry was posted in Features and tagged David Hemphill, Jackie Rivera, The Project theatre, Urban Apparel. Bookmark the permalink.