Religious Intolerance Is Issue In MTC’s New Show “For Children” 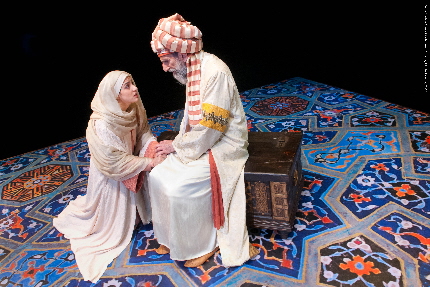 Diana Garle as Fatima consults with Steve Gladstone as her father in Miami Theater Center’s new play “Everybody Drinks The Same Water.”/ Photo by Michael Zachs

“Learning to work through inbred intolerance” is not the kids’ stuff of an ABC Afterschool Special, but Miami Theater Center’s vision has always differed radically from what is often dismissed as children’s theater.

So MTC’s original world premiere, Everybody Drinks The Same Water, opening next week, is a thematically ambitious project designed to entertain and educate audiences ranging from late elementary schoolers up to their grandparents.

The fictional story of three teenagers – a Jew, a Christian and a Muslim – allying to solve the poisoning of a Spanish king in 13th Century Cordoba illustrates the true-life coexistence of religions at that time, and confronts the alienating prejudices that are not erased even by the uplifting finale.

It’s just another step in the evolution of MTC, the multi-generational reincarnation of The PlayGround Theater in Miami Shores headed by Artistic Director Stephanie Ansin and her close colleague, designer Fernando Calzadilla.

Actress Diana Garle, who plays the Muslim heroine Fatima, is a veteran of MTC works, but she thinks Ansin and Calzadilla’s enthusiasm is especially contagious this time. “It’s so great to see what comes out of their head, the magic that they make. This is fantasy and real and history. It’s great to see how much they love it.”

This fifth collaboration of Ansin and Calzadilla is less playfully interactive and more serious than their earlier works. “It’s the first time we’ve done a story that magic was not a major element,” Calzadilla said. “It’s about human conflict.”

The setting and date inspired the story: In June 1236, the Christian king of Leon and Castille took the city of Cordoba from a Muslim ruler. Jews were already living in the community. For the next two centuries, the three peoples lived side by side for the first time on Western soil. It resulted in a community more advanced socially, economically, artistically and intellectually than its European neighbors — still a century away from the first stirrings of the Renaissance.

The plot opens as the Christian king ends 500 years of Muslim rule. He immediately falls ill from poisoning and accuses the Muslims of a counter-revolution. But when others in the community succumb to a poisoned water supply, the members of all three religions accuse each other of murderous treachery. The teenagers — Fatima, the daughter of a Muslim judge; Leah, the daughter of a Jewish doctor; and Alfonso, the king’s son — set out to solve the mystery and save the community.

In fact, while the teenagers prevail by cooperating and the adults come to a separate peace of sorts, the divisions remain. The handsome Christian prince admires and is attracted to the Muslim girl, but there can never be any real romance.

Ansin and Calzadilla have been working together since the early years of PlayGround, specializing in a spectacularly theatrical and lush approach to children’s theater that does not talk down to its audience, most of whom are bused in from Miami-Dade public schools.

Both are involved in the writing. Ansin focuses on direction and staging; Calzadilla does much of the design, But they are deeply involved in each other’s disciplines. They also work with regular contributors such as choreographer Octavio Campos, composer Luciano Stazzone and a core of actors such as Garle and Troy Davidson.

The PlayGround Theatre was founded in 2004 by Ansin and her then husband to produce a rotating repertoire of shows for young audiences. In 2012, the company renamed itself and expanded its mission to include shows for adults such as its reinvention of Chekhov’s Three Sisters. Its black box Sandbox space hosts performances in many disciplines and rents to small troupes such as Mad Cat Theatre Company. The 330-seat main auditorium is used part-time by the O Cinema for film series. MTC also hosts street fairs in coordination with the city.

The duo develops multiple projects in different stages at one time. Water had its roots in 2009 when their general fascination with folklore and storytelling focused on Jewish legends. They eventually switched their interest from King Solomon in favor of the Marranos, Spanish Jews who hid their religion by pretending to convert during the Inquisition.

That led them to investigating Cordoba in an earlier period rich in achievement – libraries, a sewer system, street lighting, advanced medicine. Its scholars preserved knowledge from the ancient Greeks that might have vanished otherwise. But it was no bucolic Eden; the social and religious differences persisted among the three groups. As in the play, the Christian rulers lost no time in turning a Cordoba mosque into church.

But that uneasy interplay of the cultures inflamed the imaginations of Calzadilla and Ansin. They developed the idea of the three teenagers of different faiths banding together to save their city.

As the Water story percolated, two other projects blossomed and took precedence. The Red Thread based on Chinese folktales premiered in the spring of 2012 and was the duo’s first play not adapted from any previous source. Then Three Sisters opened to kick off PlayGround’s evolution into MTC in November 2012.

Once done, the pair refocused on Water, simultaneously fine-tuning the plot, design elements and staging. The script was formally written from that November through the summer, although no facet of their work is ever really locked in until opening night.

Water’s characters and plot reprise a frequent theme in the company’s ethos: organically creating strong, intelligent female characters taking charge of and charting their own destiny. In this case, Fatima, Leah and even the imperious Queen Berenguela are silent role models to children in the audience. Calzadilla agreed, “We, with our grain of sand, counter the mainstream culture with all its male heroes.”

The stylistically baroque design is physically more streamlined than some of the theater’s earlier works, but equally evocative. Notable is the primary playing space, a large platform raked at an angle, decorated to look like the mosaic tiled floor of a palace and which rotates 360 degrees for scene changes. Its design like other elements is taken from actual buildings in medieval Spain.

Rehearsals began March 10 – a six-week period unheard of in South Florida but standard procedure for MTC shows. Actors undergo two weeks of acting exercises, exploring the period, investigating physical movement, and bonding with each other.

Some rehearsal exercises have a new age-ish feel that some mainstream actors chafe at; at one point Ansin had the actors identify what chess pieces their characters related to and then moved them around the rehearsal hall that way. But other actors swear by the palpable mutual trust that the time builds. Actors also have more time to make the characters a part of themselves. Calzadilla says it allows Ansin to see an actor’s real range rather than just the bag of tricks they fall back on during compressed rehearsal periods.

The time to breathe is especially helpful in developing new works which are always evolving during rehearsals, Garle said. Actors can contribute to the creation of a character’s template rather than just execute a director’s predetermined vision. For instance, a plot development about how one girl deals with being left alone with a boy is drawn from Garle’s own life.

In the end, it’s a tale that Ansin and Calzadilla hope will speak to modern challenges of people recognizing and dealing with their own intolerance. They cited Americans assuming that the Muslim pilot must be the culprit behind the lost Malaysian airline or Israeli leaders breaking off peace negotiations because the Palestinians brokered a deal with Hamas.

“This is the first time that the three major religions lived together on Western soil and here we are 800 years later still trying to resolve how to do that,” Calzadilla said.

Ansin added, referencing the height of the Spanish Inquisition and the expulsion of Jews from Spain, “And if we don’t, we’ll have 1492 all over again.”

Two other events are tied to the world premiere.

—“Córdoba Miami,” a free four-block-long medieval-themed street fair from noon to 6 p.m. Sunday, May 4, in front of the theater at 9806 NE 2nd Avenue. Featured performers will include a 15-member drum ensemble from Urban Tribal Project directed by Stazzone, flamenco and belly dancers, stilt performers, a contortionist, musicians, and a parade showcasing the cast of Everybody Drinks the Same Water, as well as food trucks and face painting.

—A free panel discussion, “Medieval Spain In Today’s World” will be held at 8 p.m. Wednesday, May 7, at Books & Books, 265 Aragon Avenue in Coral Gables. The group will discuss the period highlighted in the play  “and explore important questions about living in today’s complex, and often contentious, multi-religious society.” Panelists will include George “Trae” Williamson, Ph.D. candidate in Ethics, Religion, and Psychology and Management, University of Miami; Maribel Fierro, research professor at the Centre of Human and Social Sciences at the Higher Council for Scientific Research in Madrid, Spain; Julia R. Lieberman, Ph.D., professor of Spanish and International Studies, St. Louis University; Isabel Palacios, early music specialist and singer from Caracas, Venezuela; and Abdul Hamid Samra, Ph.D., imam and director of Religious Services at Muslim Communities Association of South Florida’s Islamic Center of Greater Miami.