Slow Burn Takes A Chance on Resurrecting Carrie The Musical 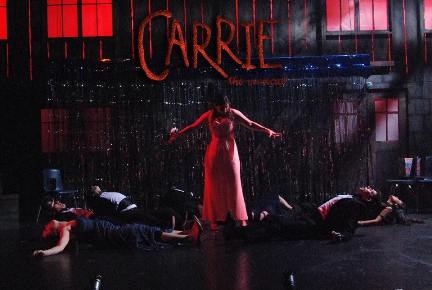 They know. They know. It seems beyond hubris for Slow Burn Theatre Company to mount a musical whose New York production in 1988 was so legendary that it became a catchphrase and a book title about famous flops, “Not Since Carrie,” as in “Not since Carrie has there been such a theatrical disaster.”

Director Patrick Fitzwater knows all that. But the truth, he avers, is that it had virtues worth saving – starting with timeless themes and parts of its score. Besides, it has been overhauled since its misbegotten Broadway bow.

More importantly, Fitzwater said, “You can’t just produce all the perfect works. You can’t just do Showboat. You have to do something with imperfections.”

“It’s become our flavor to do shows that people might not have seen. I want to give something that sparks conversations even if it’s a poor conversation,” he said. Citing his well-received production of Chess last spring whose main strength was the score, “It’s not so imperfect that it shouldn’t be seen.”

So this weekend, Slow Burn will open its new season with the musical based on Stephen King’s 1974 novel and the 1976 Brian DePalma movie, with a script by original screenwriter Lawrence D. Cohen, lyrics by Dean Pitchford (Fame and Footloose) and music by Michael Gore (Fame).

It focuses on the titular teenage misfit tortured by her schoolmates and isolated by her fanatically religious mother, Margaret. But when Carries discovers she has telekinetic powers and is humiliated at the senior prom, death and destruction result.

“The score is stunning, haunting,” Fitzwater said two weeks ago between rehearsals for Carrie and Slow Burn’s The Marvellous Wonderettes, which is now at the Broward Center through Nov. 23.

“The original [Carrie]show, which had flaws, was also a bit ahead of its time. People weren’t ready,” he said. “School shootings and mass murders were not every other month events.” The tragedy at Columbine High School was a decade ahead. Social awareness cracking down on bullying had not coalesced. Cyber-bullying was unknown.

But what was dead on target then and now is the universal angst of being a teenager. Fitzwater likened Carrie the Musical in that respect to the 2006 rock musical about disaffected youth, Spring Awakening, “although [the latter] has a better book,” he said.

One script problem that remains unresolved is that plot turns occur very quickly in the second act with little time for the actors to convincingly portray the emotional changes that result.

But the plus side of the choice could be seen during the rehearsal that night as the young cast impersonating high school students seemed ready to open barely-healed psychic wounds in the opening number, “In,” – a song about how even the most seemingly self-assured students are plagued with self-doubt. “It’s their energy and their angst and them living their lives,” Fitzwater observed later.

Like most theater lovers, Fitzwater and Slow Burn co-founder Matthew Korinko had not seen the 1988 Broadway version with Betty Buckley as the unhinged Margaret or the ill-fated tryout in Stratford Upon Avon London with Barbara Cook. But illegal recordings of the score became a staple of the bootleg Broadway music underground, piquing the interest of many aficionados.

After the play closed with only 16 previews and 5 performances, the famous Stagedoor Manor theater summer camp did an unauthorized edition in 1999. Gore and Pitchford visited it with plans to shut it down. But they were amazed how the themes of bullying misfits and other aspects were rapturously received by the kids in the audience.

During the next decade, they reworked 90 percent of the show, Fitzwater said. After experimental workshops, a new version had an intentionally limited run in 2012, one that Fitzwater did see and which produced a legit recording.

In the summer of 2013 after Fitzwater finished directing the goofy trifle, The Wedding Singer, he said, “I was (sick) of bubblegum. I was listening to my (Ipod) Shuffle…. I had Carrie on it (by chance) and I listened to one song…. It had all of this angst and energy. So I said, ‘I’m just going to listen to one more song.’ And then another. And I thought this music is great.”

Coincidentally, the next day “I get an email from (the licensing agent) and the producers saying we’ve been watching you and we think you’re the one to do this show. We want to grant you exclusivity. I went back and forth on it. I got cold feet. I had seen the revival and thought the acting didn’t work and the direction felt very forced. But they sent the cast album and preliminary scripts. And they checked back every four days.”

Finally, the company’s leaders agreed in principle but Fitzwater still had qualms. Then he announced the title at the pre-show warm-up of another show and a cheer went up in the audience. That cinched the deal.

The show resonates strongly, as well, for its two leads, Anne Chamberlain as the shy, troubled teen and Shelley Keelor as the mother determined to keep her daughter pure.

The animated and passionate Chamberlain took a break from rehearsal to half-joke, “I’m getting out a lot of angst. There’s a lot of parallels with me.”

Just one facet among many she cited: Chamberlain was home schooled through seventh grade by her devoutly religious parents and then enrolled in public Southwood Middle School “which was hell,” she recalled. The first year there, she was teased about being so intelligent. The next year, “I went from ‘You are so smart’ to ‘You are so stupid.’ Three teachers put me in front of the class and made fun of me for asking questions,” she recalled, her dark eyes wincing at the memory.

“So there’s a lot of the part in me,” she said. Then laughing, she added mischievously, “and I get to kill everyone.”

She finally found her strength and self-worth in theater, especially upon transferring to Palmetto Senior High School and then in college at the New World School of the Arts. Unlike Carrie, dances were not a nightmare, although “the prom was no fun because the music they played was rap music, nothing you could dance to.”

Still a self-described non-denominational-ish Christian, she said her parents are nothing like Margaret, but she still talked over several facets of the role with her mother before accepting it.

As a veteran of Slow Burn’s earliest shows, Chamberlain would have seemed to have an inside track for Carrie, although she had to audition for it. She has impressed audiences and critics repeatedly with her fine soprano and solid acting chops in Slow Burn shows including her Carbonell-nominated performance as the daughter in next to normal last season and as Cinderella in Into The Woods the season before that.

Carrie is far more than a horror story to her. “It’s not just about killing people. I don’t think people will expect that it’s about people learning to rewrite their brain, what they think of themselves and what they can do.” Carrie learns that she has worth even though she has the voice of her mother in her head “telling her she has sinned.…. You have this incredible beautiful music. There’s so much more heart to this.”

“I’m a strict disciplinarian and I know how sometimes the patience runs thin. As a real parent, I have to set down limits. But Margaret is very fearful of a lot of things. It’s not so much she’s angry as much as she’s afraid her daughter will go to Hell. So she completely isolates her to keep her from the transition to become a woman.” When Carrie has her first menstrual period, Margaret tells her that she “was praying that wouldn’t happen to you; she’s also afraid of being left alone. That’s what drives her,” she added.

The upbeat, effusive Keelor still had to dig deep to reach Margaret’s extremes. But she may have succeeded. “One kid (in the cast) told me I scared her.”

Keelor sees this part as a kind of showcase. She put her previous theatrical career on hold until about eight years ago and let her Equity status go on hiatus for about five years. Since moving to Florida, most of her jobs have been in her one-woman cabaret show of musical theater songs, and her turns in musical revues such as Cougar the Musical, Respect and Rock Odyssey.

Scary is certainly what Fitzwater and company are going for as Halloween approaches. “But people may worry ‘is it scary or gory,’” he said. “It’s about bullying, and seeing what people will do when they are pushed too far.”

This entry was posted in Features and tagged Anne Chamberlain, Carrie The Musical, Patrick Fitzwater, Shelley Keelor. Bookmark the permalink.