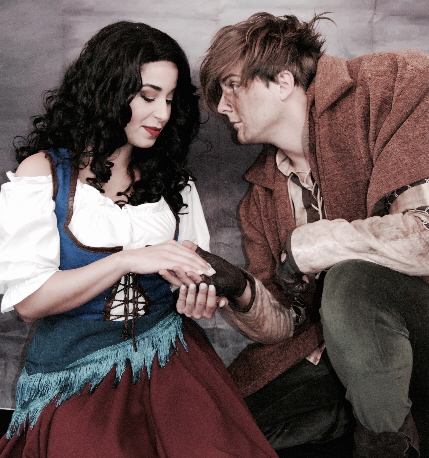 There are no dancing gargoyles in Slow Burn Theatre Company’s The Hunchback of Notre Dame even though much of the often dark musical is drawn from Disney’s popular animated film.

But the season opener this week – seasoned with humor and romance but staged on a relatively epic scale – underscores another benchmark of growth for the once modest company that has solidly arrived as a major player in South Florida theater.

This production has a cast of 16, plus a 20-piece choir, plus an eight-member orchestra plus an imposing cathedral set, plus a script-and-score that Disney has only judiciously licensed to four other companies in the country.

It’s late September and co-founder Patrick Fitzwater is taking a rare breather in the empty Amaturo Theatre at the Broward Center a few days before rehearsals start in earnest.

He grins and says without a shred of bragging, more with amazement than anything else, “Sometimes (co-founder Matthew Korino) and I reflect back on where we came from Bat Boy and where we are now….” His voice trailed off.

“We are now moving up in the ranks to where we’re held now to a different standard. I feel like we are just neck and neck with the Maltz (Jupiter Theatre) and Actors’ (Playhouse). “It’s fun to be a big boy. But it’s just there are growing pains.”

Hunchback is one of four mainstage musicals this season including Titanic, Big River and Aida, plus modest revivals of their earlier productions of Avenue Q and Xanadu in the smaller Abdo River Room, plus for the first time, a children’s musical, James and the Giant Peach. The set and costume workshop has moved from its tiny production home in Oakland Park to a much larger space in west Broward. And this year, it will not just produce at the Broward Center and again at the Aventura Arts & Cultural Center, but also short runs of the two smaller productions at the Crest Theatre in Delray and the 3,000-seat Thrasher-Horne Center in Jacksonville.

Slow Burn’s explosion has affected its finances as well from when it started at the West Boca Community High School in 2010 with a relatively small balance sheet. It’s annual budget grew to about $400,000 before it left that venue. Now at the Broward Center, it’s about $650,000 not counting its smaller shows. Now it’s making a concerted effort to raise funds to make up for the increased costs of producing at the Broward Center.

Although the work never ends even in the summer, this will likely be Fitzwater’s only free weekend for the rest of the season as artistic director-director-choreographer. It’s a similar outlook for executive director Korinko who handles many of the producer duties, who acts in other companies’ productions and who often appears in Slow Burn shows such as portraying Frollo in Hunchback.

“So this opens on the 20th” on a Thursday in previews, Fitzwater said. “We’ll make it through press night on Saturday night, have the matinee on Sunday. Monday morning we start rehearsals for Avenue Q. (Hunchback) closes on a Sunday  (three weeks later). That night I go upstairs and have tech on Avenue Q and it opens two days later.”

Neither he nor Korinko are ungrateful or complaining in any way whatsoever. But it’s a different world with logistics like having to store the set every weekend so that the Broward Center can stage one-night stands in the space early in the week and with fiscal challenges like $25,000 to pay for union help on every show. Fitzwater laughed. “What the hell happened? This was supposed to be small. Every week I think it was never supposed to this big.”

Fundraising has become a significant issue with such challenges. Some shows have been fiscally disappointing like the acclaimed Violet last season. Others have been surprising successful such as last summer’s Heathers, which” was out of control,”  selling out performance after performance and marking the first time their summer show ended up in the black.

Slow Burn, which has always been adept at promotion through the Internet, scored heavily bringing in Millennials to Heathers with a concerted online effort. It’s doing it again with regularly posted cast profiles on Facebook for Hunchback,  which has been selling better than Big Fish did last fall. 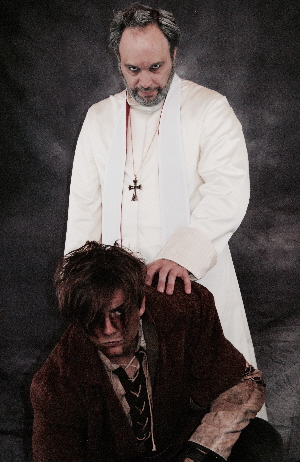 The musical, produced by the Disney organization, was based on the 1996 Disney animated film. Both are based on the often-filmed 1831 novel by Victor Hugo about Quasimodo, a deformed bell-ringer who falls in love with a gypsy Esmerelda who, in turn, is loved by a dashing army captain and lusted after by Frollo, the repressive clergyman overseeing the titular church and who has adopted Quasimodo.

The show was written by director/librettist James Lapine and playwright Peter Parnell, with music by Stephen Schwartz and Alan Mencken who augmented and expanded their songs from the Disney film. Unlike the animated version, this one is somewhat faithful to novel’s decidedly tragic end, leavened by a plea for tolerance and acceptance as its coda. The first version opened in Germany in 1999 and ran three years, although it was seen to have crucial flaws.

The creative team took it back in the shop for retooling. The new version opened at La Jolla Playhouse in San Diego in 2014 and at Paper Mill Playhouse in New Jersey the following year. A concept studio album based on the Paper Mill production was released early this year.

Slow Burn’s selection of Hunchback was a bit of a serendipity. The team was searching for a title with strong name recognition, but hampered because it is blocked from mounting a show currently on a national tour anywhere.

The reworked darker Hunchback was supposed to go to Broadway but Disney balked at selling a show with a woman being burned at the stake when its Times Square patrons were expecting anthropomorphic lions, mermaids and, at the time, a swinging ape man.

Fitzwater noticed that fans of the show were outraged online. People had travelled extensively to see earlier productions as it evolved. He found Disney was cherry-picking the regional theaters that would essentially premiere the new work. They cross-examined applicants about details such as the size of the venue and asked for examples of the company’s past work.

In the end, Slow Burn will be only the fifth company allowed to do the show. But online mention of its acquisition sparked cyber-hits from across the country and even London.

“So, we dove into the needs of the show, which are epic. I would say this is our Les Miz because of the sheer epic scope of it,” Fitzwater said.

Besides the number of performers, everyone has be costumed including the choir wearing monk’s robes. The set with its iconic Notre Dame window and its massive bells is imposing even in photographs. The production will use pyrotechnics for the first time. The choir will be split among the audience boxes. Just getting everyone in place will be a challenge in the narrative opening number as individual ensemble members become a group of storytellers.

While the plot and tone is closer to Hugo’s vision, the show has humor, dancing, production numbers and uplifting moments. Fitzwater drew numerous analogs in the dramaturgical structure and tone of Wicked.

Also, intentionally or not, the script echoes today’s social-political situation, especially the character of Frollo.

“We put something on Facebook the other day, ‘Make Paris great again,’ because that’s what Frollo says, because he wants get rid all these people who have come into Paris, all these immigrants, all these gypsies that have overrun the city… He even says it in the show, ‘We need to make Paris whole again.’ ”

He shook his head after reading the script. “And I’m going, oh, my God, this is the same thing we’re dealing with now: the themes (that the characters are singing about) of someday life will be brighter, life will be kinder, there will be acceptance and I’m like ‘Still, here we are and we still don’t have it.’”

It goes deeper: “Watching the way Frollo interacts with Esmerelda, the fact that he has trained himself to hate all gypsies, but, in fact, for some reason this one has gotten under his skin. And rather than deal with her, he wants to exterminate her. Rather than deal with what he’s feeling he wants to get rid of her. And just how abusive Frollo plays so many mind games with Quasimodo to make sure that he stays where he’s supposed to be, not to go out there, that the world is cruel, it’s bitter out there, you’re only safe here with me, and Quasimodo is all that Frollo actually has himself.”

So, no, don’t look for dancing gargoyles.

The Hunchback of Notre Dame presented by Slow Burn Theatre Company at the Amaturo Theater, Broward Center For The Performing Arts, 201 SW 5th Ave., Fort Lauderdale. Previews Oct. 20-21.  Regular performances through Nov. 6. Performances are Thursday through Saturday at 7:30 p.m., and Sunday at 2 p.m. Tickets are $25-$60. Call (954) 462-0222 for tickets, at www.browardcenter.org or #Ticketmaster.com; in person at Ticketmaster outlets or the Broward Center’s Auto Nation Box Office. Info at www.slowburntheatre.org

This entry was posted in Features and tagged Broward Center for the Performing Arts, Matthew Korinko, Patrick Fitzwater, Slow Burn Theatre Company, The Hunchback of Notre Dame. Bookmark the permalink.