So, The Dead Edgar Allen Poe Drops Into Emily Dickinson’s Bedroom With His Coffin…. 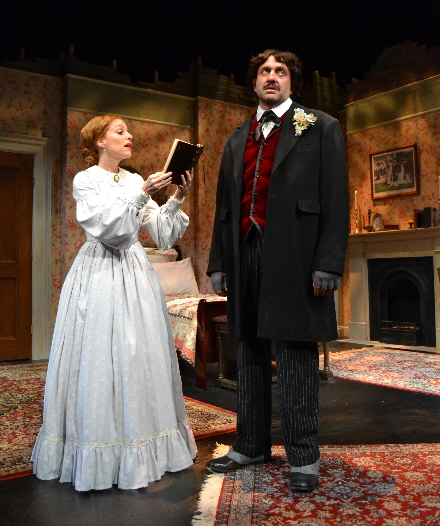 It’s a cold January night in 1864.  The poetess Emily Dickinson is waiting for her parents to come home when Edgar Allen Poe barges into her bedroom pulling his coffin behind him. This is even stranger than it sounds since Poe is believed to have died about 15 years earlier.

Such is opening of the world premiere, Edgar and Emily, opening this weekend at Palm Beach Dramaworks, which has been integrally involved in the play’s development for about two years in its Dramaworkshop program.

“So, it’s not a docudrama,” jokes the play’s director and Dramaworks’ producing artistic director Bill Hayes. Indeed, he and playwright Joseph McDonough refer to it as an absurdist comic fantasia, keying more on the two souls’ vision of what it means to be alive, their shared fascination with death and being true to an artistic vision  – with profound insights and a lot of silly humor.

But there’s no attempt to be historically accurate; indeed, while some famed writers did and do hang out together, it’s unlikely these two ever met. McDonough quipped, “I like to say this play is true except that it never happened.”

So devotees of their works will see a vision of these creative minds likely far different than they expect when they are inhabited by veteran local actors Margery Lowe and Gregg Weiner.

McDonough, whose several plays and musicals have often premiered at the Ensemble Theatre Cincinnati and the Cincinnati Playhouse in the Park, has been a frequent visitor since submitting his play for consideration in the Dramaworkshop.

The Dramaworkshop was created in the fall of 2014 to develop works in a multi-stage process that takes advantage of a cadre of actors and evaluate scores of submitted plays. Scripts selected move on to various phases of development such as staged readings, workshops, and studio or main stage productions. Edgar and Emily is the first to make it to the fully-produced mainstage production. Another piece, Koalas by J. Joseph Cox will receive a staged reading April 20-21 (https://www.palmbeachdramaworks.org/thedramaworkshop#program-schedule).

McDonough had researched Dickinson for another piece and then began thinking about Poe. The initial script was submitted amid scores of others. Once selected, the script had a reading in May 2016, which led to deep continuing discussions between McDonough and Hayes. A four-day workshop was held last summer with Lowe and Weiner, who have worked together several times including Dramaworks’ A Doll’s House and Caldwell Theatre’s Clybourne Park.

In a new developing work, “the chemistry and these words sometimes they fit and sometimes they don’t,  but me and Marge just sort of clicked,” Weiner said as final rehearsals began about three weeks ago.

“Their chemistry helped through the reading,” McDonough said. “Even in that initial reading I knew on the spot it was a strong foundation and I had two actors perfectly suited to” the roles.

Another get-together occurred in January with more changes and fine-tuning. The Dramaworkshop process allows for regular rewriting as the author can gauge whether the structure of a play works, whether things can be cut or need to be added, whether the dialogue needs tweaking – all more effective because the playwright and director hear and see the nascent performances.

McDonough recalled, “There were areas where it was overwritten. There were transitions needed….. Marge and Greg were very good at asking probing intelligent questions about their character: Why am I going in this direction. But the big discovery was that some things I was unsure about whether the actors would be getting, they got, and other things I thought were clear, weren’t. There were always moments where I thought certain things were funnier, and others that were funnier than I thought they were.”

Weiner said that developing new work poses a different kind of challenge for an actor, “It’s fun but working with a brand new script is heavier lifting than most.”

“You are working on two levels,” he said, being both deep inside the character and outside the performance. “You have to be open and work hard, just listen and focus and care about the words your saying. You have be super in the moment.  But as a kind of editor, you’re creating these words they might not be working. We had a discussion last week about things that don’t roll off the tongue. You have to use improvisational skills… . different words might come out of my mouth.”

Lowe offered, “You try to be a puppet for him as opposed to something that is a finished product and knowing this works. It’s kind of walking on a tightrope, because you don’t know (what will work) because it’s never been tried before, But that’s also the exciting of it, the fun and the danger of it.”

As the process continues, especially in the final weeks, the collaborative exploration of playwright, director and cast intensifies with awkward or unclear sections replaced.

Research might seem to be a requirement for the actors, but it’s not as essential as people think because they are playing McDonough’s Dickinson and Poe, not the real people.

“I’m starting to do some now,” Weiner said a few weeks ago. “But because it’s not a documentary style script, I may need maybe three or four facts from Poe’s life….  For me, it’s more about capturing the point of view and what’s happening in those moments. The historical information does not really apply. Obviously, I want to know the broad strokes and I read as much Poe as I can. I haven’t read much since high school and college and I’ve loved his work. It’s right up my alley. So I will be reading more about who he was.”

Lowe said, “Research is my favorite part of a project…. But this is first time they said we don’t want you to research. We worked on the script last week and now I’m understanding why: It is Joe’s complete fantasy of these two people and his vision of it.”

But with the enigmatic Dickinson, her later research showed “everyone has a different interpretation. Even reading her poetry, you have a very personal response.”

“The only other risk is having names that are known and so revered and so loved” and people expecting to see their previous perception, Lowe said. “Hopefully, those people will come and have fun with it.”

Hayes agreed, “The play is about finding and discovering your artistic self. I’ll be happy if people walk out of the theater thinking about them in a different way.”