Talkin’ In The Green Room With: Karen Stephens 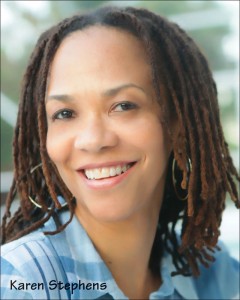 Karen Stephens’ ability to submerge herself in disparate characters was highlighted in her stunning tour de force playing 14 characters in 90 minutes in Sarah Jones’ Bridge & Tunnel which she has performed several times in the state. But just as impressive is her skill to disappear into less flamboyant characters, people who might live next door to you, such as the pragmatic mother she just finished portraying in Doubt at the Maltz Jupiter Theatre.

A native Floridian who has worked in the region more than 25 years, Stephens has been a member of several Carbonell Award-winning casts, a recipient of three Carbonell nominations, and received Curtain-Up, New Times and Silver Palms awards.

She directed productions for The Kravis Center for the Performing Arts’ education department for three seasons. She was commissioned to write one of these productions, At Promise, while working with teens at Planned Parenthood. Prior to that, she was commissioned by Alternative Arts to create a play, Breaking Chains, from workshops conducted with teenage inmates at the Florida Institute for Girls, and also conducted workshops for troubled teens at the Palm Beach County Detention Center. Karen was honored with the 2004 Clyde Fyfe Award from the Palm Beach Cultural Council for artistic development and community service and Delta Sigma Theta’s 2009 Woman of Excellence in the Arts.

What school did you graduate from/what was your major?  I’m a graduate of The University of Florida with a BFA in Fine Arts (Theater)

Artistic directors say they have a difficult time casting plays with local African American actors, saying the local pool of experienced performers is extremely small.  Why is it hard to attract and keep African American actors? I was recently involved in a Facebook discussion about this. My theory is that it’s sort of like the chicken and the egg. There is a small pool of black actors because there are so few roles available; actors tend to go where there is work. If there were more theaters that produced shows that allowed them to use black actors, those actors would stick around. Also, whatever one’s craft, experience is the best teacher. Actors get better when we have the opportunity to practice our craft.

How did you create such different characterizations for Bridge & Tunnel? How do you make the transition among the characters without having any bleed-over from role to role?  For me, characterization for any role begins with the words. Most everything I need to know about a character lives in the dialogue, which informs the characters’ intent. Then I make choices based on that intent. Since the characters and their stories in Bridge & Tunnel are so diverse, the choices for those characters were based in the language, the rhythms of the accents, cultural markers, the reason each character was there, and why they needed to tell their story. The transitions were made easier because the characters and their intents were so varied.

Do you do much preparation for a role? What’s your process?  I usually don’t memorize lines before rehearsals begin. The repetition of reading through the script and getting the show on its feet helps with that. When I first read a script, I get a general idea of who the character is and once I begin working with the director, start to fill in the blanks. If a back story isn’t in the script, I will sometimes create one if I feel it’s necessary to flush out the character. The marriage of words and action really crystallizes things for me.

What role/play are you dying to do but no one would think of you for? I’d like to do Blanche DuBois or Maggie the Cat. I know they’ve done those shows already with black actors but I don’t know if that could happen here. I’d also like to do a Noel Coward and an Oscar Wilde play.

What show do you wish somebody down here would produce? August Wilson’s Fences…. and cast me in it.

What show will you be happy never to see again unless it gets you a job? Godspell or is it Hair? Either one of those 🙂

What do you say when someone you like is in a terrible show or does a poor job? If I tell you then I’ll be telling on myself!

How do you cope when there are more people on stage than in the audience? That’s tough, because of the exchange of energy between a performer and the audience. It’s especially difficult with a show like Bridge & Tunnel where the actor talks to the audience throughout the show. However, the show must go on! We give those few the show they came to see.

Do you have any pre-show rituals?  Not really. Sometimes I pray to calm my nerves.

What do you do after a show? My favorite thing is to go out for a bite with castmates. (Once a run is over I get a little depressed)

What was the first show you were involved in and what did you do?  I did my first real play in high school called Up The Down Staircase. I played a teacher.

When did you know this was what you wanted to do and why? I went to college to major in English, but I somehow found myself in the theater department and deciding upon that as a major. I can’t pinpoint the exact moment I made that decision, but as a child I was always crazy about movies and musicals.

What do think has been your best work in the theater to date, and why? I think my best work to date has definitely been Bridge & Tunnel, however before that I believed it was Michael McKeever’s play, Running With Scissors, where I played the character of Blind Love. I received a Carbonell nom for it but sad to say did not take home the award.

What do you think was your worst, and why didn’t it work?  I am really fortunate in that I haven’t had a worst.

What was your best experience working in theater? My first professional gig, Chicago, at the Royal Palm Dinner Theatre; great show, great cast, and great fun!

What was your worst?  I went in as a new cast member in a national tour of Ain’t Misbehavin’ which was on the cruise ships and some members of the cast were not very nice to me. So while working on the ships was fun, doing that show was not.

What one role/show would like to do over or just do again? A noir comedy I did at Florida Stage called Dark Rapture by Eric Overmyer. My character was Max, a sex pot with some great lines who was the love interest of one of the characters.

What was the worst on-stage mishap you dealt with? While doing the play Spunk, I stepped backward off of a small step on a multi-level stage and found myself sitting flat on my behind. It was surreal!

What’s your day job?  I’m a cosmetologist; I cut and style hair. I work for myself so I can be free to adjust my schedule when I get a show. I tried being a starving artist when I left college but that wasn’t my bag. I tend to like knowing how I’m going to pay my bills.

What’s the weirdest/worst non-theater job you ever had? The worst: telemarketing

Do you have unexpected special talents and skills? I love to emcee shows or events. I get to ad-lib and indulge my secret desire to do stand-up.

What would you do if you couldn’t be in theater? I’d be a teacher.

What TV programs do you DVR when you’re working a show? Haha, I’m a dinosaur, I still use a VCR! Anyway, I video-tape So You Think You Can Dance, American Idol, awards shows or Game of Thrones.

Whose music can you not live without?  Ooh, that’s a hard one…. I have so many favorites, but I have one CD (now on my Ipod) by Alejandro Fernandez that I take with me on every trip I take. I don’t even remember the title but the vocals are so sublime it doesn’t matter that I don’t speak Spanish and can’t understand most of what he’s singing.

Why doesn’t South Florida theater have a higher profile nationally? Because they play it safe or risk losing their audience.

Finally, add a question you wish I had asked.  What would it take for you to give up your day job?  I’d say more opportunities and a living wage. (Or winning the lottery and opening my own theater!)

This entry was posted in Features and tagged Karen Stephens. Bookmark the permalink.

One Response to Talkin’ In The Green Room With: Karen Stephens