The Answers To Another Theater Geek Trivia Contest 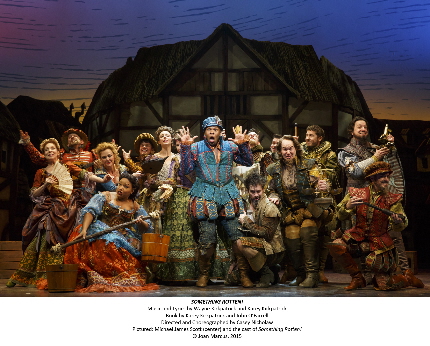 After a theater season in South Florida with four, five even six openings in a single weekend, the production metabolism slows down this summer to only a dozen openings in a month — which gives us a chance to work on some reporting projects this summer and to entertain you with some of our lighter features.

So here, once again, is the latest installment of our patented theater geek trivia contest. This one is tied to the recent Tony Awards and the arrival next month of Ali MacGraw and Ryan O’Neal in Love Letters at the Broward Center July 21-26.

A musical number from The Last Ship appeared on the Tony Awards telecast last year even though it was not due to open for months. Finding Neverland had a musical number appear this year on the telecast even though it did not get any nominations at all. It Shoulda Been You was not nominated for anything in any category, but it also scored a coveted spot with a scene performed on the telecast. Last year, The Bridges of Madison County, which won two Tony Awards including Best Score, did not have a number performed on the telecast. As the Fun Home team tried to finish their acceptance speech this year, the telecast cut in with a performance from 2005’s Jersey Boys. One very specific mechanism was the reason for all these artistic judgment calls. What was it?//

The individual shows’ producers paid (or did not pay in Bridges’ case) for the numbers to be on the telecast.

Name four of at least 17 Tony Awards this year presented during commercial breaks this year.

In an attempt to jazz up the Tonys, two initiatives were tried out this year. What were they?

First, Broadway actors who had no current shows interviewed colleagues and celebs on the red carpet with just as inane questions and vacuous results as any other award pre-show red carpet parade. Two, style czarina Anna Wintour selected certain anointed high-profile or at least good-looking nominees on whom to bestow her fashion advice.

In theory, presenters have a connection to the Broadway theater. Jennifer Lopez, Nick Jonas and “Canadian singer” Kiesza, all of whom probably need a limo driver to find a Broadway theater, were co-presenters to introduce the number from Finding Neverland. Why? This is not a rhetorical question.

All three had sung songs on a non-cast album of Finding Neverland that the producers were flogging. Jonas was supposed to appear in How To Succeed In Business Without Really Trying in 2012 but the show closed before he could appear but he still recorded some numbers from the show. But the real answer to the question is Harvey Weinstein.

When Something Rotten lost the Best Musical Tony Award to Fun Home, it’s publicity staff rebounded by taking out large ads with the headline “Losers” and then listed the famous shows that also lost the Tony for Best Musical. We’ll list which show lost and the year, you supply who actually won.

Love Letters, A.R. Gurney’s 1988 play in which two actors read their characters’ letters aloud, is coming to the Broward Center with MacGraw and O’Neal. Scores upon scores of actors have performed the show because it involves very little rehearsal and no memorization.

Besides Love Story, how many times have MacGraw and O’Neal appeared in the same film?

Never. They are friends and kept somewhat in touch, but they never did another project.

How many straight theater credits do each of them have?

One. MacGraw did Love Letters once in a benefit, but she doesn’t really count that. But she had a self-described nightmare experience in her Broadway debut in the straight play Festen in 2006. O’Neal says that when he was very young he appeared as the mysterious young man in Edward Albee’s The American Dream in Los Angeles directed by Richard Harris and featuring Mia Farrow. He says he forgot all his lines.

Who starred in Love Letters’ world premiere at the New York Public Library? (Hint: One of them was in Two And A Half Men)

Gurney himself and Holland Taylor.
–
It then moved the Long Wharf Theatre in New Haven, Connecticut with which stars? (Hint: Nick & Nora and Getting Away With Murder)

Who starred in its 1989 off-Broadway bow that made it famous? (Hint: The son of a concert pianist and a very hot actress who spent some time in South Florida.)

When it finally made it to Broadway, what acclaimed married couple from stage and screen were the first pairing? (Hint: They were famous for playing lovers in a Eugene O’Neill play)