The Magnificents Is Theatrical Ode To Classic Magic At Arsht 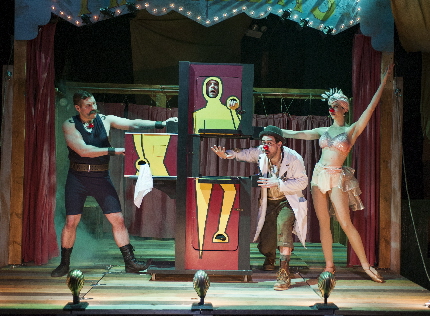 If the House Theater of Chicago’s Death and Harry Houdini was about neglecting life in the pursuit of conquering death, The Magnificents is the other side of the coin.

“The Magnificents is about a guy who is really trying to reclaim his life in the face of death,” says the House’s Artistic Director Nathan Allen.

Allen wrote Houdini, which played the Adrienne Arsht Center’s Carnival Theater in 2012 as part of the center’s Theater Up Close Series for a five-week run. It starred magician-actor-playwright Dennis Watkins as Houdini. Now Watkins stars in his own play, The Magnificents, with Allen directing. And once again, it’s magic and illusion that propel the story of a traveling magician and the young boy he takes under his wing that takes up residence inside the intimate Carnival Studio Theater in the Arsht’s Ziff Ballet Opera House beginning tonight.

“Houdini is very much inspired by the legend that people know. Harry Houdini is a name that lives in all of our imaginations as the world’s greatest magician,” says Watkins. “And he certainly played on a giant, world stage. In The Magnificents, the magician plays to small audiences and is, in a lot of ways, trying to fill the world with wonder and ‘ta-da’ in a very different way,” says Watkins.

Whereas Death and Harry Houdini felt big, muscular, and aggressive, Watkins The Magnificents is much more loving, even though both share the same obsession with secrets.

Born in Dallas, Texas, magic and theater run through Watkins’ veins. His grandfather, Ed Watkins, owned a magic shop and performed magic; his uncle, Jeff, is artistic director of the Atlanta Shakespeare Company.

The Magnificents is a bit of a tribute to Ed Watkins, who taught the young Dennis magic, but he says the story is merely inspired by his grandfather and his own growing up learning the tricks of the magic trade. But it’s not “mirror events of my life. The spirit of my grandmother and grandfather and their relationship is very much in the play, but I make no attempt to really paint a picture of either one of them. In some ways, it honors them by speaking to their spirit.”

Watkins based much of his main character on a magician named Harry Willard, a.k.a., Willard the Wizard, originally from Clarksville, Texas, who toured throughout the southwest United States with his tent show. On the road during his prime, he traveled with up to 17 trucks and his circus-like tent which could hold up to 2,000 people.

“There were several generations of the Willard magician family that passed from generation to generation for several years. They’d have trucks, a giant tent, and a portable stage that was built out of the truck and they would stop in little Texas towns,” says Watkins.

“It was a show I never saw, but read about, and my grandfather always told me that Willard the Wizard was the best magic show that ever played on this planet,” he recalls. The magician-actor-playwright says he fell in love with the idea of the traveling tent show and the life that the families must have lived.

The Magnificents was first produced by The House Theater of Chicago in 2007. Watkins said that when he originally wrote the play it existed in a “bizarre, crazy big clown world. There was no time or place.”

But now, Watkins admits, it’s evolved into a much better, much more solid play.
Allen agrees: “Every project grows with time and investment and this production is much more mature than what we put up in Chicago a few years ago.”

Watkins says that the current incarnation is “grounded in a reality that people may have read about or know about.”

What he loves the most about what he’s accomplished with The Magnificents is its tribute to classic magic. “It’s packed with magic. We have a tuxedoed magician performing on his own stage and you get to see sleight-of-hand magic up close and classic mind reading and large scale illusions where people get cut almost in half (in The Magnificents, someone is cut in thirds). You get a huge array of magic.”
Watkins says this is magic not seen much in the modern world of illusion and he mentions the big Las Vegas magic shows where magicians “want to do magic in new and exciting ways.”

His show pays homage to “the little mysteries that were performed for generations. And there’s a reason that magic lasted so long. It’s lovely and it sparks a sense of wonder.”

The Magnificents is the fifth show that The Arsht Center has collaborated on with The House Theater — in 2011, the Chicago theater company staged its original production entitled The Sparrow in the black box theater, the first time The House brought a show to Miami.

The collaboration between The House and the Arsht Center got its start in Chicago when Scott Shiller, the former executive vice president of the Adrienne Arsht Center (he’s recently been named President and Chief Executive Officer at the Denver Center for the Performing Arts) was Vice President of Programming at The Chicago Theatre.

“Scott was a peer of mine in Chicago,” says Allen. “He had seen some of our works early on when we were breaking in in Chicago and then he saw The Sparrow (The House produced the original show in Chicago in 2007), which was a big deal for us. When he was looking for programming for the 200-seat Carnival Studio Theater in Miami, it seemed like the perfect fit. There isn’t much touring that is made for that kind of space, but it is exactly where my company fits. Scott invited us with The Sparrow.”

And, as they say, the rest is history.

Outside of Miami troupes, the House Theater of Chicago was the first company of its size to produce shows at the Carnival Studio Theater inside the Arsht.
In 2012, it was Death and Harry Houdini and that same year they brought a reinvented Nutcracker, a quirky twist on the holiday classic. In 2014, the House’s original play Rose and the Rime had its Florida premiere inside the Carnival Studio Theater.

The Chicago theater company is already booked for 2016 at the Arsht as part of the Center’s 10th anniversary season. They’ll bring The Hammer Trinity, a trilogy of plays written by Allen and Chris Matthews, a company member of The House Theatre who stars as the Boy in The Magnificents.

“We put Hammer Trinity up in Chicago to probably some of the best reviews that I’ve ever received. It is a huge project and really sort of a watershed moment for our company and my work — our work.”

Is there any concern with Shiller’s departure that the partnership between The House and the Arsht may not continue?” I’ve been building relationships with many people in the community here over the past five years,” says Allen. “I hope those friendships here are rooted well enough to have us keep coming back.”

The Magnificents is part of the Arsht Center’s 2014-2015 Theater Up Close Series. The show plays in previews April 8 and 9. Opening night is April 10.. It plays through May 3. Tickets are $50. The Carnival Studio Theater in the Ziff Ballet Opera House at The Adrienne Arsht Center for the Performing Arts of Miami-Dade County, 1300 Biscayne Blvd, Miami. For tickets, visit. www.arshtcenter.org or (305) 949-6722.