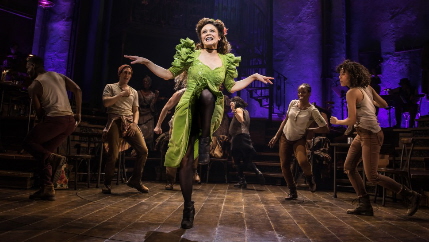 Another round of 2020-2021 season announcements has arrived with some promising titles — this time from Primal Forces and the Maltz Jupiter Theatre – plus a headline-making offering from Broadway Across America at the Arsht Center: Hadestown.

There are still some other major announcements coming in the next couple of weeks: the Kravis Center’s tour slate announces at an event on the 17th, the Broward Center’s Broadway lineup comes in mid-March and Actors’ Playhouse schedule is imminent, among others.

But unlike the arrival of Hamilton and Dear Evan Hansen in South Florida in recent seasons, Hadestown’s announcement is coming less than a year after it opened in New York where it later won eight 2019 Tony Awards including Best Musical and then the 2020 Grammy Award for Best Musical Theater Album.

Playing for one week only in December, Hadestown with its surreal highly theatrical spin on a Greek myth of Orpheus, post-apocalyptic setting and folk opera score may not draw in the crowd seeking Hello, Dolly!, but will be highly anticipated by those following the latest Broadway buzz.

Interestingly, Hadestown will have its first South Florida stop in Miami. Over the years, some of the biggest titles have opened in Fort Lauderdale rather than Miami and had longer runs —  such as Hamilton  – presumably because the older Broward Center has a larger and deeper subscription list.

At the same time, Primal Forces in Boca Raton, whose small casts tackle incisive issues, will present four South Florida premieres each featuring characters struggling against the system with exploration of Hollywood legends and myths, the criminal justice system, big pharma and children’s rights. More on their season further below.

The Maltz Jupiter Theatre, whose lush productions often sell out before a show opens because of its large subscription  audience, will offer its usual mix of blockbusters with familiar titles (including what might be the first local production of Sunset Boulevard) along with acclaimed plays like the class conscious Good People. More on their season further below.

And Slow Burn Theatre in Fort Lauderdale has announced its summer show of next season Kinky Boots (June 11-27, 2021) to fill out its already announced season of  Head Over Heels, Mary Poppins, The Full Monty and A Gentleman’s Guide to Love and Murder.

December 8 – 13
Hadestown
Written by Anaïs Mitchell and director Rachel Chavkin (who staged the fabulous Natasha, Pierre & The Great Comet of 1812) intertwines two mythic tales — that of young dreamers Orpheus who goes to hell to rescue his lover Eurydice, and that of King Hades and his wife Persephone.  Set in a Great Depression-like post-apocalyptic environment, it sets industry against nature, doubt against faith, and fear against love.

January 5 – 10, 2021
Hairspray
A new tour of this hilarious and upbeat musical reunite director Jack O’Brien and choreographer Jerry Mitchell and adds in a song from the film version.

February 17 – March 7, 2021
Wicked
Back again, but its fans return over and over. The tour is usually kept so fresh that newbies will discover what the fans adore.

March 30 – April 4, 2021
Dear Evan Hansen
This deeply affecting musical, which won six Tonys and a Grammy, became a surprising mega-hit among teenagers who never saw a Broadway show before. It tells about a teen who feels like an outsider but is suddenly thrust by a lie into popularity and fame – but it has consequences. With a score by Benj Pasek and Justin Paul who wrote music for A Christmas Story, La La Land and The Greatest Showman).

May 18 – 23, 2021
Anastasia
The stage musical version of the Disney animated film is surprisingly solid and entertaining for more than just kids,  buttressed by some of the most impressive computer-generated projections seen in a Broadway musical. Doesn’t hurt that the script is by Terrence McNally, and the score by Stephen Flaherty and Lynn Ahrens, who gave us Ragtime.

June 22 – 27, 2021
The Cher Show
Say whatever you want, this bio-musical featuring not one but three Cher characters with different actresses and 35 songs was a cult hit in New York and won a Tony for one of its actresses and the costumes.

Overdosed on pills, the woman behind the icon drifts back through time and the memories of those she loved: the Kennedys, Clark Gable and Joe DiMaggio. Revealing a frustrated intelligence, she exposes the truth behind her legend, leading us to the center of her psyche.

A blistering satire that takes on Big Pharma as the frustrated managing editor for “piggeries” at American Cattle and Swine magazine discovers a new wonder drug that will banish all thoughts of discontent…but at what cost?

A social worker sparks a family conflict that exposes a shadowy, secretive past— and forces her to make a risky decision with potentially disastrous consequences.

March 5 – 21
Time Alone
by Alessandro Camon
directed by Genie Croft
Surprising twists and turns in this story of two victims of the criminal justice system: A young prison inmate and the mother of a police officer. But the connection is not what you think.

Subscriptions may be purchased at www.primalforces.com or by calling 1-866-811-4111. Individual ticket sales will be available in mid-September.

October 25 – November 8, 2020
I Hate Hamlet
By Paul Rudnick
In a hilarious comedy, the ghost of legendary actor John Barrymore, dressed as Hamlet, has returned to his old apartment in New York to convince television star Andrew Rally to take an offer to play Hamlet. Andrew is torn when he receives an offer from a Hollywood friend for a lucrative part in a huge television show. Does he take on the dream role to play Hamlet or does he pursue the life of a celebrity with all of its fame and glory?

December 1 – 20, 2020
Sweet Charity
Book by Neil Simon
Music by Cy Coleman
Lyrics by Dorothy Fields
Dance hall hostess Charity Hope Valentine has had a rough time when it comes to finding “the one.” In spite of one misfortune after another, Charity is optimistic and still believes in true love. She isn’t ready to give up on her dreams of settling down with the right guy in this high-energy, dance-filled, comedic musical sensation. A Tony Award-nominated musical, Sweet Charity captures all the humor and heartbreak of life in the Big Apple.

January 12 – 31, 2021
Dirty Rotten Scoundrels
Book by Jeffrey Lane
Music and Lyrics by David Yazbek
The arrival of American Soap Queen Christine Colgate in the French Riviera has attracted the attention of conmen Lawrence Jameson and Freddy Benson. The two scoundrels agree to a competition: the first to swindle $50,000 gets the right to exclusively deceive and cheat in this uproarious and hysterical Tony Award-nominated comedic musical.

February 14 – 28, 2021
Good People
By David Lindsay-Abaire
Margie Walsh, a lifelong resident of Southside Boston, is out of a job with bills piling up. When her old high-school flame, now a successful doctor, throws a party for his affluent friends, Margie decides to crash it hoping to find work. What unfolds is a confrontation about choices and their consequences in this Tony Award-nominated dramatic comedy about working class American struggles and hopes with a keen sense of dialogue, dynamic characters, and the right balance of hard truths with warm laughs.

March 9 – 28, 2021
Sunset Boulevard
Music by Andrew Lloyd Webber
Book and Lyrics by Don Black and Christopher Hampton
Based on the Billy Wilder film
It’s 1949 in Hollywood and Screenwriter Joe Gillis can’t catch a break until he meets silent film starlet Norma Desmond. Overestimating her relevance and looking to return to the spotlight, Desmond hires Gillis to edit her script. When Gillis looks for a life greater than Norma’s plaything, the dream twists into a dramatic nightmare with no way out in this three-time Tony Award-winning musical masterpiece of fame and tragedy.