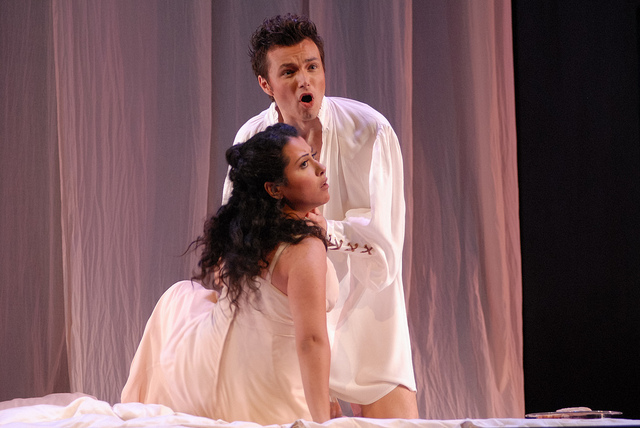 Playful, profound and rapturous — the depiction of love in Florida Grand Opera’s production of Roméo et Juliette is that of a gem showing a different facet every time it is held up to the light at a different angle.

The doomed lovers work their way through the evolving gamut of ardor-at-first-sight to a devotion that transcends death in the 1867 vision of French composer Charles Gounod and librettists Jules Barbier and Michael Carré.

FGO’s incarnation under the direction of David Lefkowich is an inventively staged, well-acted mounting of this stark take on Shakespeare’s classic. But like FGO’s other essays on love this season such as La Rondine, Luisa Fernandez and Rigoletto, the technically admirable work isn’t likely to quicken the pulse of the audience.

As with those productions, the audience is only moved by the dazzling virtuosity of the lead soprano. In this case, Maria Alejandres’ powerful trills in the joyful celebration of life “Juliette’s Waltz” and her arias about poison outshine a perfectly competent cast. That throws the partnership out of balance with the less impressive but adequate tenor Sebastien Gueze performing that other title character.

While neither has seen their mid-teen years in quite a while, both singers do a decent job acting the hyperbolic mood swings of young people in love. In fact, this  attractive couple delivers a sexual chemistry. Lefkowich has them vamp through an instrumental interlude in the wedding night by rolling around on top of each other in bed.

The rest of the principals bring the expected strong vocal talent but also  unexpected acting skill: tenor Daniel Shirley as the swaggering Tybalt, bass Stephen Morscheck is the unbending and romantically clueless Lord Capulet,  mezzo Cindy Sadler as the comical nurse, bass Craig Colclough as Friar Laurent and Courtney McKeown who has a fine voice but horribly overacts as the servant Stephano. But the most striking impression came from baritone Jonathan G. Michie as the hot-blooded Mercutio.

The plot closely follows Shakespeare’s lead about teenagers from feuding families who are instantly smitten. The opera never explains what happened to the friar’s plan to sit up all night with Romeo until Juliette awakes, but the only real deviation from the Bard is that Juliette awakes in time to find Romeo still dying from the slowest acting poison in history. Then she stabs herself. That allows them the satisfying finale of singing themselves to death together, asking God’s forgiveness for their suicide. Actually, Shakespeare might have approved of that enhancement.

The orchestra under the baton of Joseph Mechavich in his FGO debut was in emotional sync with Gounod’s rich swelling melodies that sound less like the Italians of the period and more like a harbinger of the accessible operettas and even musical comedy to come.

Lefkowich’s work is one of the production’s strengths. He encourages his actors to delve fearlessly into the adolescent passion and embrace the poetic lyrics along with Gounod’s score. His visual flair is evident in crowd scenes such as the masked ball where there is always a sense of motion and the ensemble is engaged in individualized bits of business like minor figures in a crowded post-Renaissance painting. His skill as a fight arranger comes in handy in the gang clashes, and his choreographic bent employs dancers to restate the plot in slow-motion nightmares such as Romeo recalling the double killings.

The sets rented from a previous production in Minnesota are stuccoed buildings that echo M.C. Escher works, whose broad white walls provide a surface for projections of moving clouds and religious statuary that give the spare stage an added texture. 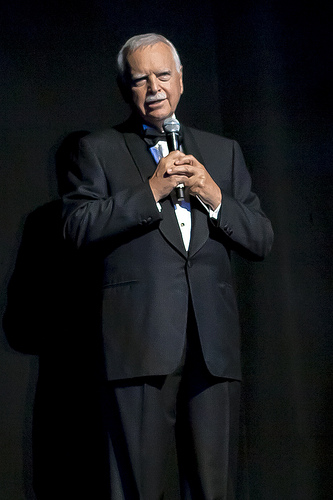 The opening night performance was preceded with a farewell from Robert M. Heuer, FGO’s third general manager in 71 years who is retiring at the end of May.

“I want to thank you for all the warmth I’ve felt from you subscribers and patrons” over 32 years, he told a crowd that responded with scattered shouts of “thank you” and “bravo.” Quoting Shakespeare’s script as well as the opera, he signed off with “Parting is such sweet sorrow.”