Posted on December 4, 2011 by Bill Hirschman 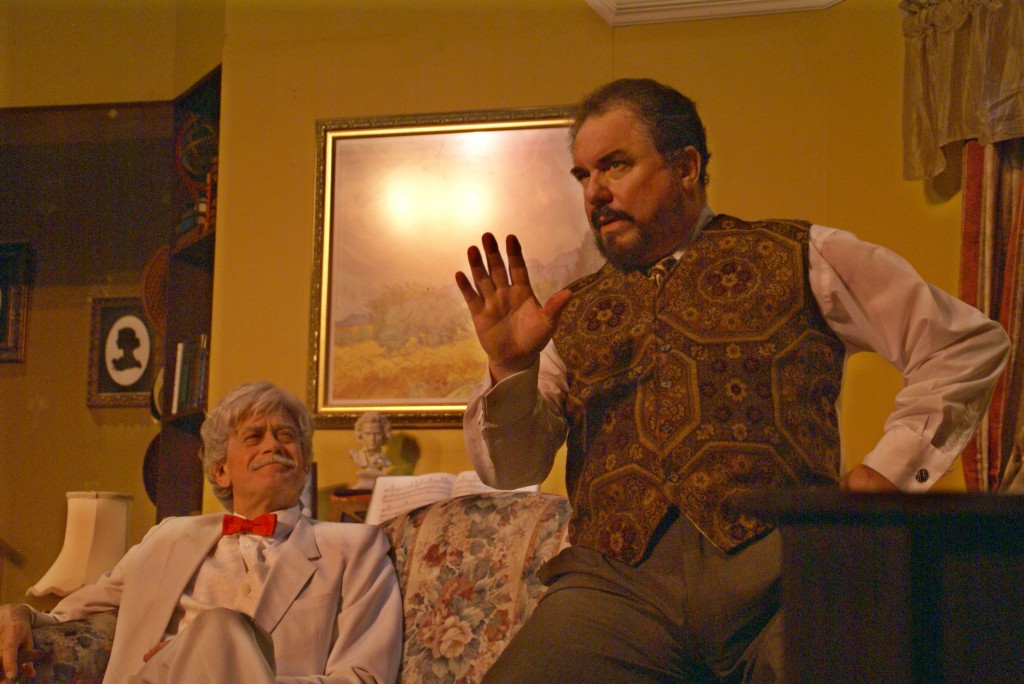 An intriguing premise and the words of two witty literary giants are not enough to build an engrossing evening in New Theatre’s world premiere of Chambers Stevens’ comedy, Twain and Shaw Do Lunch.

With no dramatic conflict, no character development and no narrative arc, Stevens’ 90-minute comedy is primarily a procession of the title characters telling each other funny anecdotes and plying each other with witticisms.

It’s possible that two supremely gifted actors with irresistible charisma could invest this script with enough verve and topspin for the content alone to be entertaining, but Stephen Neal as George Bernard Shaw and Bill Schwartz as Samuel Clemens are simply competent journeymen.

Stevens acknowledges that much of the script – a fictional account of a real meeting – is drawn from the duo’s writing and speeches. The problem in this production directed by New Theatre Literary Manager Steven Chambers (no, not the same person) is that the script sounds exactly like that: an artfully woven pastiche of the sages’ greatest hits.

The premise is that Twain is visiting England near the end of his life and is persuaded to visit the 50-year-old Shaw as he is on the cusp of international greatness. Shaw’s highly intelligent wife (Pilar Uribe) is the gracious hostess, plying Twain with liquor and a miserable meal. The three trade war stories, funny anecdotes and bon mots while the Shaws cope with the irrelevant fear that they may be visited by a beautiful stalker. That’s it.

Uribe’s energy drives the first third of the play, but she is offstage struggling to fix an indigestible dinner for long stretches, leaving the play’s forward motion to the century-old quips and tales.

In a white wig and moustache, Schwartz looks and moves like the aging lion, but the only time he gets to show his acting chops are in a few sad reveries about the loss of his wife and daughter.

Neal tries hard, but he doesn’t look, sound or act like any incarnation of the curmudgeonly and intimidating Shaw we’ve ever heard of. For comic effect, Stevens has made him a hapless, woebegone figure out of a sitcom who relies on his wife to keep him from self-destructive foolishness. It should be noted that he says one line with the appropriate Irish accent and none with any British accent.

Neither actor delivers that innate sense of genius. It’s ironic that a play built on the brittle, sarcastic wit of two natural storytellers who you (and Stevens) would think you’d want to just spend time listening to, in actuality, has audience members glancing at their watch.

It’s because nothing happens, even character-wise. Some observers might challenge the need for action, citing the success of Mark St. Germain’s Freud’s Last Session, recently done at Palm Beach Dramaworks and still playing off-Broadway 500 performances later. Nothing actually happens there either. But in that work, you have two geniuses passionately arguing diametrically opposing views about the existence of God. There is conflict there; there is none here other than a couple of flashes when Twain criticizes Shaw’s beloved Socialism and his view of Joan of Arc.

Earlier drafts of this script have won awards, so it makes you wonder what isn’t working, although you have to shake your head at humor that derives simply from mentioning a Shaw play title as part of the dialogue such as “misalliance.”

This show is the first in New Theatre’s new home at the Roxy Theatre Group in west-central Miami-Dade. The former multiplex movie theater is not hard to get to, especially from the Turnpike and has free parking. The theater is in the elbow of a large strip shopping center on the southeast corner of 107th Avenue and 16th Street. This show is mounted in its 150-seat auditorium, the smaller of two in the building. Among many pluses, the stage is nearly three times the postage stamp that New Theatre had in its late home on Laguna Avenue, about 8 miles east of here.