next to normal Is Harrowing Triumph For Thinking Adults 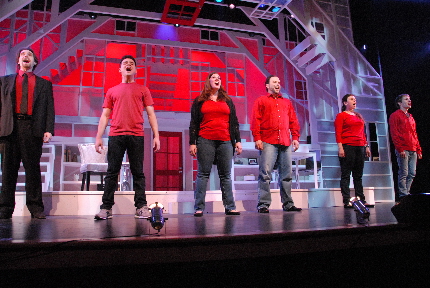 Critics are congenitally awash in self-doubt when they adore something — journalists are taught not to trust superlatives. But to heck with it.

Slow Burn Theatre Company’s profoundly moving production of the musical next to normal is about as good as it gets in South Florida theater.

Following on the superb Side Show last spring, next to normal affirms that the underdog troupe based in West Boca a block from the Everglades has graduated into a first-rank producer of theater in the region.

Some audiences will not willingly embrace the complex, upsetting and harrowing material – especially more than 2 ½ hours of it with only a glimmer of hope shining in the darkness.

But every aspect — from the direction to the performances to the production values to its insistence on treating the audience as intelligent partners in a theatrical experience — just sweeps away every “mildly entertaining” evening we’ve spent in theater in the past few months.

This tale of an archetypical suburban family struggling with the mother’s bipolar disorder is representative of a new wave of American musicals written by and for younger, more adventurous audiences who love theater but are tired of the fifth retread of a warhorse. It not only won three Tony Awards (but lost the top prize to the feel-good Billy Elliot), but won the Pulitzer Prize for Drama in 2010. The fact that few musicals have won the Pulitzer eloquently speaks to the sophistication and insight of this work composed by Tom Kitt, book and lyrics by Brian Yorkey and shaped through three developmental productions by director Michael Greif.

On its most simplistic level, it depicts from the inside the anguish of the mother Diana Goodman as played by the outstanding Sharyn Peoples. The endlessly changing regimen of pharmacology and the terrifying electro-shock treatments are “solutions” that dull Diana’s perception of being alive and even cause amnesia.

But in most productions, the focus gravitates toward Diana and the actress playing her. The role won a Tony for Alice Ripley in what was an inconsistent performance from night to night, but bloody brilliant when she was on all cylinders. Peoples is not a whit less compelling but her Diana commendably doesn’t commandeer the spotlight. Thanks to the direction of Slow Burn co-founder Patrick Fitzwater and Peoples’ courageous restraint, the show brings into the primary spotlight what often becomes next to normal’s secondary theme. It becomes a true ensemble piece about how the entire family is ravaged by Diana’s curse and seeks ways of coming to a lasting detente with it.

Another half-dozen themes swirl about as well. One of the most unnerving is that the wedding vow of steadfast loyalty in “sickness and health,” embodied by the husband Dan, does not guarantee a relationship will prevail. What happens when true abiding love does not conquer all?

And on a related track, if you’ve seen the show before, listen this time to all the permutations of the word and the concept of being “here,” being present in your own life, being present in others’ lives, being “here” by balancing self-sacrifice with respect for your own needs.

The plot opens as Diana Goodman is berating her 17-year-old son Gabe (Bruno Vida) for staying out late. It becomes clear quickly that she is struggling with an increasingly debilitating illness that has crippled the family including Dan (Matthew Korinko) and her younger daughter Natalie (Anne Chamberlain). Natalie, an intellectually brilliant but emotionally stunted teen, is blocked from fully embracing a relationship with a quirky stoner-slacker beau Henry (Jason Edelstein).

Suddenly, the family discovers that Diana is even more disturbed than they thought. Diana agrees to try to cope with delusions by submitting to an ever-shifting regimen of pharmaceuticals proscribed by a doctor (Clay Cartland). But they rob her of a clear emotional connection to the normal highs and lows of living, as expressed in one of the show’s loveliest songs “I Miss The Mountains.” When that fails, Dan and a new psychiatrist (Cartland again) persuade Diana to undergo electro-shock therapy.

From there, Diana’s ongoing struggle worsens the long-term damage to herself and her family as they try to come with a long-term solution or at least an accommodation that may provide some hope.

Kitt’s extensive score of about 30 songs has a pop rock flavor with faint echoes of Duncan Sheik’s Spring Awakening, Adam Guettel’s Floyd Collins and even Stephen Sondheim. But it embraces elegiac ballads, rock anthems and nerve-jangling kick-butt numbers. Yorkey’s lyrics range from almost ineffably poetic to unintentionally hackneyed. But even his more clichéd phrases are infused with credible life by the sextet of actors here who not only have uniformly gorgeous voices, but who act in and through the music.

The show’s secret strength is that the team has created, as much through the script as the music, a tone of aching compassion throughout an unflinching excavation of human angst.

Both facets are elicited in every aspect of Fitzwater’s leadership. He creates a smoothly flowing river of passions both repressed and unleashed. No one can know how much of any performance is the actor, how much the director and how much an alloy. But Fitzwater has either elicited or enabled such an outpouring from his cast.

Fitzwater is also a choreographer and while there is little formal choreography, his staging is often accented with movement created by someone who understands its worth. He also juxtaposes groups of people in ways that draw correlations between their shared plight. Conversely, he relies a bit often on having a character simply stand in a spotlight and deliver a song, but it does focus our attention on the words and the emotion.

He has elicited personal bests from the entire cast, starting with Peoples. Above all, she never plays Diana for even a second as psychotic — which makes her striving accessible and unnervingly relatable. Peoples’ Diana not only looks like the woman next door, she looks like woman in the mirror. This makes Diana a victim caught in the grip of a devastating illness not of her making. Peoples captures the suppressed fear and confusion of someone whose mind is uncontrollably betraying them. As she passes from doctor to doctor, she exudes the gallows humor of someone who has been subjected to too many “cures.” Belying the stress, her Diana often seems under control; it is only when she sings that the passion erupts. Peoples doesn’t belt like a Broadway diva; no one does here. But she has that powerful passion-filled cry of the heart that you find in some rock singers like Janis Joplin.

Matching her every step, and this is unusual in next to normal productions, is Matthew Korinko’s anguished husband. Korinko may be the other co-founder of Slow Burn but he has earned every lead role he’s gotten. And this is his best work yet. Not a shred of self-pity colors his depiction of a caring but frustrated man. Korinko’s Dan feels profoundly rejected not by his wife but by the fairy tale’s promised dream that 19 years of unwavering loyalty guarantees that he can salvage his marriage.

Right behind him is Slow Burn veteran Anne Chamberlain as the daughter terrified that she carries her mother’s affliction. Chamberlain deliver’s Natalie’s feeling of estrangement from Diana that has poisoned her ability to risk herself in a relationship. The winsome Chamberlain is nearly a decade older in real life, but she is absolutely credible as a late adolescent tied up in knots, forced to grow up too quickly and who is feeling her way into young adulthood through a very dark room. As she proved as Cinderella in Slow Burn’s Into The Woods, Chamberlain has a glorious voice that imbues even Yorkey’s most poetic lyrics with a sense that they could come from the mouth of a pre-Millenial.

Bruno Vida as the son Gabe is electricity exploding from a bottle, especially in his roof-rattling anthem “I’m Alive.” He succeeds in being the ever-present part of the family that is luring Diana away from sanity, although he doesn’t have that sex appeal that makes his scenes with his mother in other productions so intentionally uncomfortable.

Jason Edelstein is dead on as the boyfriend Henry, simultaneously inhabiting the iconic attributes of a nerdy misfit as well as the unimpeachable love that Henry has for Natalie.

Clay Cartland adds yet another couple of droll but convincing portraits to his resume. Cartland has the ability to be both inherently funny and straightforwardly serious at the same time.

Slow Burn reinforces its reputation for memorable production values on a modest budget. Sean McClelland’s design for the Goodman house once again portrays an X-ray of the skeleton of the two-story home as most other productions have done, but his vision is completely different. He fills the theater’s wide stage with an Escher-like house with stairways forming the roof; windows and a door visible on the ceiling. The white wood frame structure resembles a traditional homestead, but the walls are translucent or non-existent, revealing a cyclorama awash in violet, chartreuse and blood red evocative of the emotional upheaval.
.

The set is enhanced immeasurably by the scores and scores of pictures painted with light that Lance Blank uses to change locations and moods like a kid with ADD. Perhaps a few more lights out front might help, but it’s a major accomplishment. Rich Szczublewski brings Slow Burn yet one more step in the ongoing improvement in sound quality in what is, in reality, a high school auditorium. Rick Pena designed the perfect costuming.

Once again, the music direction by Manny Schvartzman is exemplary. Kitt’s score is complex and Schvartzman not only molds the cast in the blistering solo numbers, but in Kitt’s complex chorales of interweaving harmony lines. And as the keyboardist, he leads the near-perfect live band of Nick Trotogott on percussion; Rupert Ziawinski, bass; Greg Chance, guitar; Anna Ventura, violin, and Konstantin Litvinenko, cello.

This production marks a benchmark for this company in several ways as it opens its fifth season.

The company has always been fiscally conservative, resisting the urge to extend its runs past two weekends, mostly to ensure that expenses did not exceed its limited budgets. But slow steady growth in audiences has encouraged the company to add a weekend at the Aventura Arts & Culture Center. The center frequently takes a chance hosting theater productions touring in from out the region; so the managers thought why not take a chance on a local company instead, Fitzwater said last week. The sets and lighting plot were designed to be easily adaptable to the Miami-Dade venue, Korinko said. The third weekend also makes it eligible for consideration in the Carbonell Awards.

To see a slide show of photos from the production, click here.