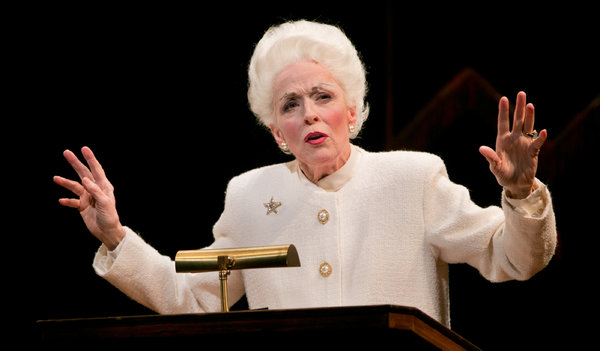 Holland Taylor as Governor Ann Richards in the one-woman show “Ann” that she wrote.

We’re back from our semi-annual trip to New York to scout out productions you might want to see (or not), shows that might  tour South Florida and scripts that might be worth reviving in our regional theaters. This trip is a little unusual for its timing regarding Tony nominations, so we may not see some of the blockbusters until the fall. See the list of previously reviewed shows at the bottom of the story. Other reviews are coming of The Dance of Death and The Big Knife.

Among the highest compliments for a one-actor biographical play is that after the house lights come up, you wish you could take the hero or heroine out for a couple of beers to continue the conversation.

While the actual production of Ann at Lincoln Center has a few shortcomings, you yearned to toss back a few with former Texas Governor Ann Richards and kick around how to save the country. It’s not compelling theater, but it’s a hell of a lot of fun.

Richards was such a tart-tongued truth-teller who cut through governmental red tape and ingrained hypocrisy while savoring her bluntness that we impotent mortals vicariously cheer her on. Holland Taylor, a veteran stage actress best known for TV’s Two And a Half Men, spent six years writing this script, coming up with most of the quips herself rather than quoting Richards. Then she honed her performance during stops around the country until it landed in The Big Apple this season.

The percentage of failures is huge in these adoring wit-and-wisdom portraits that resurrect some dead sage whose passing seems to have taken a lot of common sense with them. After all, it’s extremely un-credible for a protagonist to be relating to us every significant highlight of their lives. “And then I charged up San Juan Hill.” You can count the unalloyed triumphs on the fingers of one hand: Tru, and then there’s Tru, and then…. Well. Maybe Henry Fonda in the closing scenes of Clarence Darrow.

But Ann charms the audience because of its focus on the progressive but practical politician who believed that public service not power was the point of the exercise. For the undereducated, Richards, who died in 2006, caught national attention while state treasurer when she delivered the feisty keynote address at the 1988 Democratic National Convention. She only served one term as governor before being defeated by George W. Bush in the national Republican landslide in 1995. But during that time, she and her administration helped fix the state’s economy and led numerous reforms that made her seem downright liberal. She also seemed to be the embodiment of what the women’s movement had been aiming for over a century.

The play opens with Richards delivering a folksy, chatty commencement address to a high school somewhere and then drifts into that limbo that most one-actor biographies occur in. Then the play strangely shifts structure as we eavesdrops on a day-in-her-life as a governor, herding cats and agonizing over whether to issue a stay on a death penalty case.

Frankly, Ann is not quite the soaring triumph you might expect given its extended run through Sept. 1. The script runs at least 10 minutes too long in the day in the life section whose drive dissipates every time she stops to counsel one of her grown children on the phone about what she fears may be a fractious family gathering – and that’s several times.

Further, Taylor didn’t summon the sheer force of nature that the role seemingly demands on the night we saw her. Her voice seemed a little hoarse – something that infected several performances the week we were in NYC. But the Philadelphia-born Taylor found both Richards’ soft twang and that infectious twinkle-and-a-smile that Richards exuded when tweaking someone’s nose. Of course, she has incorporated the essential visual hallmarks such as Richards’ snow white hair and cream-colored tailored business outfit.

But Taylor’s name recognition as Charlie Sheen’s small screen mother, the low producing cost and a warm word of mouth makes it likely that Ann will tour the country in upcoming seasons.

An unrelated side note:  This trip came around the time of the Tony nominations and voting process, so there was a lot of celebrity spotting in the audiences. I got the chance to tell a startled Neil Simon that he bought my great-aunt’s apartment at the Ritz Tower on Park Avenue back in the Reagan Administration. But our favorite encounter had to be sitting at Ann in front of 88-year-old Hal Holbrook, who had to remove his new-fangled tiny hearing aids so he could insert the assistive listening device. Holbrook, who no longer needs a white wig to perform Mark Twain Tonight !, regularly erupted with the most glorious full-throated and satisfying laugh that any on-stage performer would want to hear booming out at her out of the dark.

Ann runs at the Vivian Beaumont Theater at Lincoln Center through Sept. 1.

This entry was posted in General and tagged Holland Taylor. Bookmark the permalink.