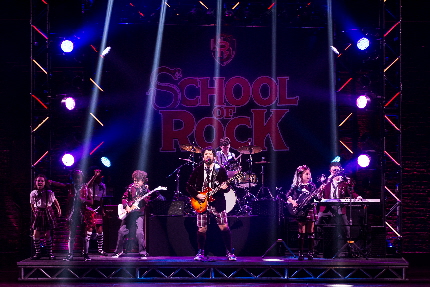 On our most recent trip to New York, we saw exciting, inspiring works of theater: The Father, Shuffle Along, The Humans. But nothing was quite as exciting and inspiring as the Wednesday matinee of School of Rock.

Not because the musical itself was outstanding (although it is undeniably entertaining), besides we saw it with the understudy stepping in for the Tony-nominated lead Alex Brightman.

It was a high point of the trip because we were surrounded by hundreds of kids freed for spring break. They loved it, absolutely loved it. They paid rapt attention to the stage rather than their cellphones — when they weren’t cheering loud enough to make paint fall off the ceiling of the Winter Garden.  So much for Theater being dead.

This seems a strange collection of creative people considering the material. Based on the 2003 film written by Mike White and starring the inimitable Jack Black, this script was penned by Uber-Brit Julian Fellowes (creator of Downton Abbey and the musical Mary Poppins) with lyrics by Glenn Slater (Sister Act and The Little Mermaid) and music by, wait for it, by Andrew Lloyd Webber plus some classic rock tunes transported from the film. The director is Laurence Connor who won praise for reimagining the national tours of Les Miserables and The Phantom of the Opera. Finally lessening their chances, the crucial maniacal presence of Jack Black, scruffy anarchy incarnate, is AWOL.

But damn if this didn’t work even without the presence of Brightman, so the tour holds promise.

This edition retains the silly, spoofy idea of overaged slacker Dewey being kicked out of his flailing garage band which, like he, is musically stuck in the 1980s. Dewey crashes with Ned, his former bandmate from the good old days who is building a teaching career. When Ned’s wife threatens to eject the freeloader if he doesn’t pay rent, Dewey steals Ned’s letter hiring him to teach music at the kind of regimented private prep school that requires uniforms and which decorates its oak-paneled halls with decades of awards.

But they are all preternaturally talented and Dewey proposes forming them into his entry in the upcoming Battle of the Bands. Among his obstacles is the lovely but primly proper principal (Sierra Boggus).

One reason this stage version works is the electricity inherent in the over-the-hill rebel gleefully upending everybody and everything, all in the unspoken virtue of self-expression once everyone is taken out of their strait-jacket – even Dewey.

But the other is the kids. Every kid in the cast actually plays their instrument (augmented a bit by the unseen orchestra). These performers’ talent is impressive, but Brandon Niederauer playing a molten lead guitar is a prodigy who is hard to believe can be replaced. Their enthusiasm and complete immersion in their parts are infectious.

We did not see Brightman, but understudy Michael Harney was fine; he’s likely who you will see on the road. The only thing missing was that Black exudes a sense of unpredictable danger. You never know when he is going to do something harmful to himself or others. That’s missing here.

But despite the celebration of nose-thumbing rebellion against conformity or social correctness, this is still a traditional musical “for the whole family” infused with those inevitable homogenized Disney-fied messages of finding your inner person and thereby reinforcing your self-worth, etc. etc. But the rock music cooks, both classic riffs like “Smoke on the Water” and “(I Can’t Get No) Satisfaction” melded with Webber harkening back to his rock ’n’ roll roots (re-listen to the original Jesus Christ Superstar album).

A national tour is inevitable and this is the one to use to introduce your kids to “the-uh-tur.”

This entry was posted in General and tagged Andrew Lloyd Webber, Julian Fellowes, School of Rock. Bookmark the permalink.