Women Drivers Mirthful and Moving But Mired in Metaphors 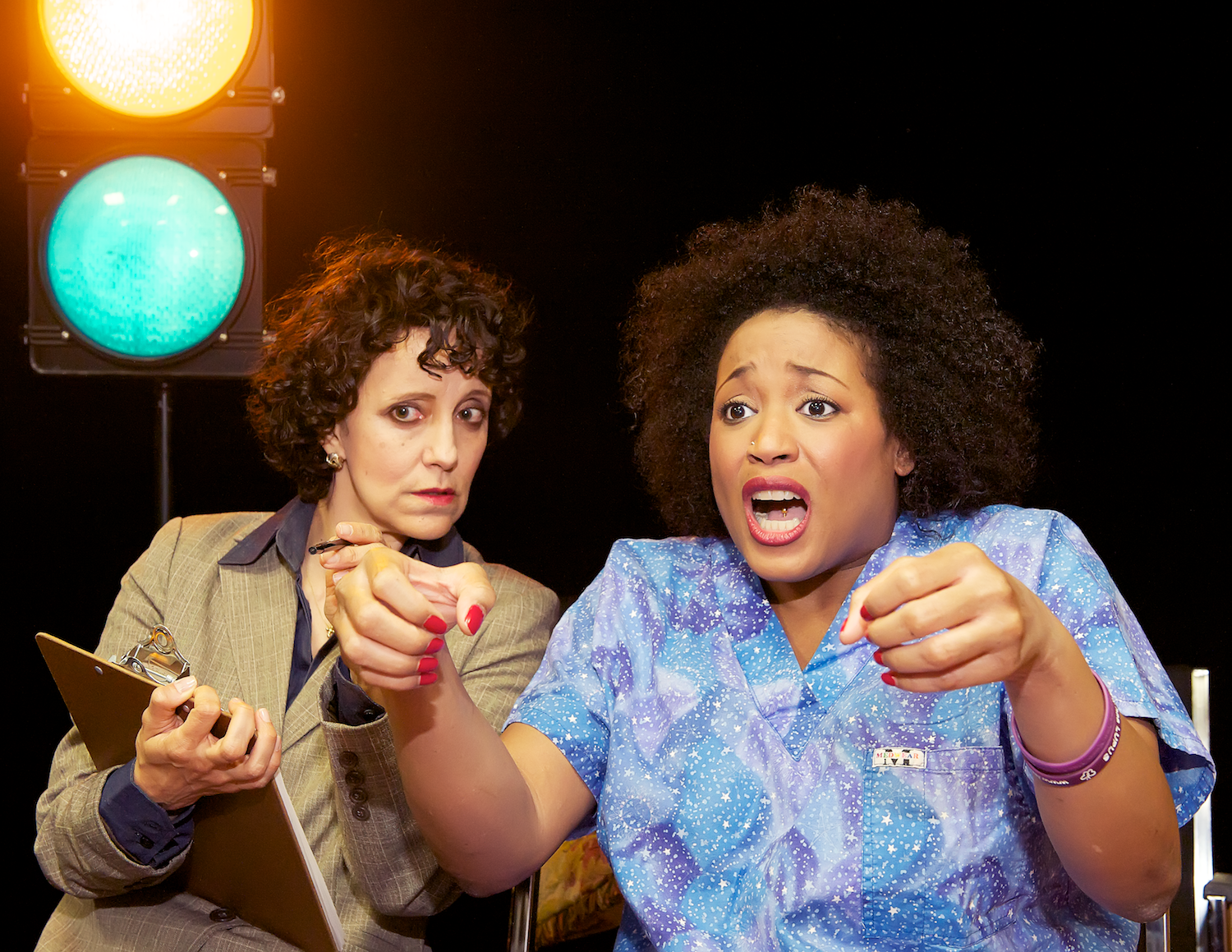 There is something inexplicably hilarious about people struggling to master the high technology of operating an automobile. One of the funniest comedy routines of the second half of the 20th Century has to be Bob Newhart’s deadpan depiction of a beleaguered too-patient driving instructor.

But local playwright Terry Lawrence wants to do far more and far less than make you double over in laughter during her comedy with a message Women Drivers, which is getting its world premiere at The Women’s Theatre Project.

She, too, depicts a driving instructor teaching a procession of hapless novices, but these comical run-ins (sorry) are meant to provide life lessons as well as make you laugh.

Well, not so much laugh as giggle and grin. The virtues of Women Drivers are quiet ones that elicit chuckles at recognizable situations and smiles at reaffirmed values. It’s so restrained and its goals are so modest that it’s not a thoroughly satisfying meal so much as a pleasant snack.

Lawrence (who wrote the successful Speaking Elephant for the same troupe) has a genuine talent for finding metaphors. Unfortunately, she slathers them on until they seem like the only tool in her chest. They are omnipresent. Some are spoken aloud in deft speeches. Some are layered into the action and theme. For instance, she draws positive parallels between the instructor  as the classical nurturing role of a woman.

Her metaphors depict a zeitgeist in which people spend a lot of time separated from each other because they are always in their cars, yet they try to maintain a safe distanced connection by constantly talking on their cell phones the whole time they are driving.

She can even poke fun at her own obsession with metaphors. For instance, most characters share names with cars such as the instructor Erin Ford and clients Shelby Hall, Skylark, and Grace Goodyear.

At one point, Erin says, “I’ve been stalled out, spinning my wheels and going nowhere. Maybe it’s a sign I have to get moving again, get my life in gear.” To which Grace articulates what we were thinking: “Is it all driving metaphors with you?”

The show begins with the genial, calm Erin (Pilar Uribe) telling us she is a laid-off public school driving teacher (“… seriously, you aren’t a real teacher if you haven’t been laid off at least once”) who has opened her own shop specializing in women patrons.

The metaphors start immediately. She tells a prospective client about the good thing about learning to drive, “once you learn it, the rules don’t change.”

Erin is not going to keep that even keel all day: Her mother (Miki Edleman) keeps calling her on her cell while both are driving and she’s coping with an intransigent client Della Driver (Jacqueline Laggy). The attention-challenged Della is on her third-court ordered traffic school because she blithely blames everyone else for her string of mobile mishaps.

Oh, and in the back seat sits the wisecracking ghost of a teenaged client Grace (Nikki Bromberg) who died in a car crash and is apparently spending much of her afterlife texting. The specter of fatal consequences pushes the play into serious territory. But Lawrence also uses the situation to bring in the century-old comic device of having Erin argue with the invisible Grace when her current clients think she’s talking to them.

As the days pass , Erin loses her calm in sessions with a middle-aged woman who harbors a secret sadness (Jana Tift), a single mother and a sassy teenager (both played by Lela Elam) and an elderly widow wondering whether she can still drive (Edelman again).  Throughout, Erin is trying to discover whether Grace is haunting her because Erin did not sufficiently train her not to use the cell phone while driving.

Over the play’s arc, Grace helps Erin learn lessons, possibly about living life fully. If that’s it, the clues are, you guessed it, in metaphors.  Grace says, “Driving is like life. But at some point, you’ve got to get out of the car.” And someone says, “Life is like driving. You have to be here to get there.”

The script falls solidly into the theater’s wheelhouse – plays tightly focused on exploring women’s issues to the point that I’m not sure they’ve ever needed to hire a male actor.  So you know that the last thing Lawrence means to do is lampoon the stereotypes of inept women drivers.

The performers are all competent if not astonishing, and Uribe particularly is pleasant and compelling company.

But there is one scene when Lawrence’s writing, Edelman’s understated acting and the direction of Genie Croft all coalesce into something indirect but quite moving.

Erin has agreed to evaluate the driving of 86-year-old Mrs. Rumsey whose children worry about her being on the road when she shuttles her friends to appointments.

Mrs. Rumsey says, “People always blame older drivers. Somebody should tell pedestrians not to wear those dark clothes… They wear those pants so baggy they can’t run to get out of the way.”

But the lady, without starting the car, reminisces how she drove her children, how she drove while working during World War II, how integral it has been to her life, on and on in a litany that we can all relate to. Lawrence illustrates how the automobile has become a crucial part of our life’s equation, especially as a symbol of our independence and therefore our self-worth.

Then at the end, without ever having started the car, she simply gets out of the car and places the keys in the front seat. 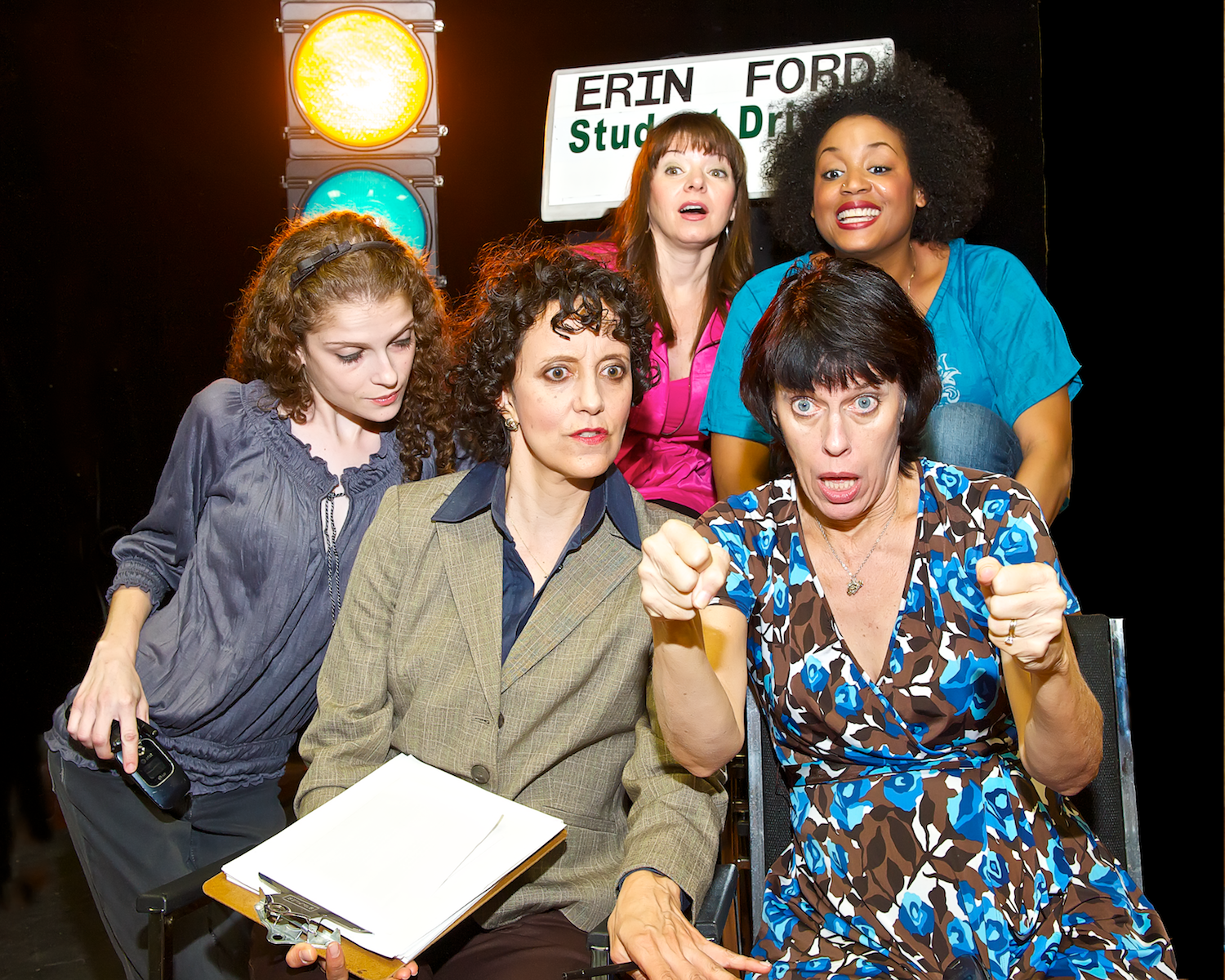