Zoetic’s The SantaLand Diaries Is Witty Satire, But Not For Kids 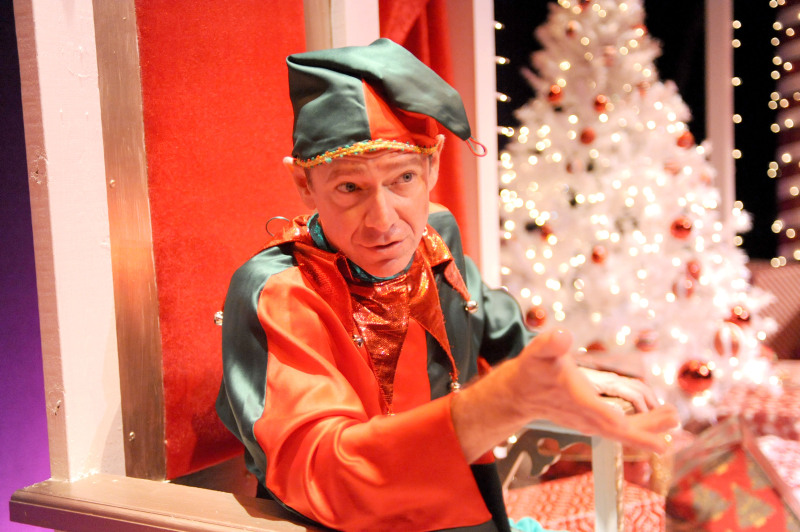 The SantaLand Diaries is a holiday tale – not a warm inspiring morality fable for Christmas, but a harrowing if hilarious horror story for Halloween.

In Zoetic Stage’s production, the satirical monologue of a would-be actor slaving as an elf in Macy’s SantaLand is a wry, acerbic riff on the desensitizing corporate commercialization not just of the holiday, but of genuine sentiment as well.

Michael McKeever, one of the region’s most popular thespians, is inspired casting, not just because of his slight stature, but because of his blend of genial charm and beleaguered helplessness at the absurdities that the temp job heaps upon his sensibilities.

Faced with co-workers who “say everything with an exclamation point,”   the newly-dubbed elf Crumpet quips as dryily as the martini he swills for reinforcement: “I’m afraid I’m not going to be able to provide the grinding enthusiasm that Santa requires.”

But the enforced jollity saps the real thing out of the faux elves’ souls. “I spend all day lying to people, saying, ‘You look so pretty,’ and ‘Santa can’t wait to visit with you. You’re all he talks about. It’s just not Christmas without you. You’re Santa’s favorite person in the entire tri-state area.’ It’s made me immune to compliments.”

Under Stuart Meltzer’s direction, McKeever delivers these grievances with a weary twinkle that enlists our sympathy as well as our laughter. Although the material doesn’t flag, it also is somewhat similar in tone for the first two thirds of the evening, so some people might find the middle sagging a little. But Meltzer and McKeever keep finding moments to inject some extra theatrical topspin such as an imitation of Billie Holiday bluesing up “Away in the Manger” is simply inspired.

Midway through opening night, McKeever’s voice sounded a tad strained at carrying the 90-minute show. But in the final 15 minutes, as the holiday frenzy ratchets up, McKeever re-energized and drove the insanity to an uproarious (and briefly touching) finale.

The droll script is based on humorist David Sedaris’ 1992 autobiographical essay for National Public Radio and was adapted by director/actor Joe Mantello in 1996.  The one-man show has become a holiday tradition in theaters across the country like a curdled version of Jean Shepherd’s A Christmas Story. McKeever, in fact, did the show two years ago at Burt Reynolds’ Institute in Jupiter.

Zoetic has again spent extra time and effort on the externals: shifting Christmas lights, a background seasonal soundtrack including a snatch from The Who’s Tommy and a set by McKeever that features Santa’s throne, scores of brightly-wrapped packages and two white-flocked trees, all looking like the entryway to one of those year-round Christmas stores.

Then there’s the image of McKeever issuing a few blue phrases trying to keep his dignity while dressed in a polyester green-and-red motley with jingle bells, curling toes on his boots and a floppy hat.

If you’re already overdosing on too much tinsel and powdered sugar, SantaLand is the antidote to the holiday insulin shock.