Actors’ Playhouse to mount dark, challenging musical “Next to Normal” 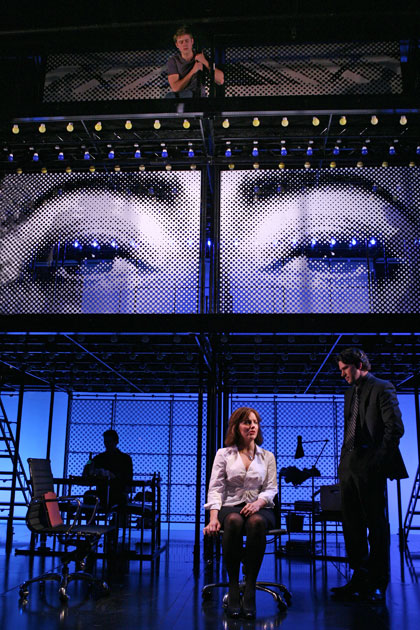 If you thought the Actors’ Playhouse production of’August: Osage County was taking a gamble outside its audience’s comfort zone, now comes news of a much bigger risk.

Next to Normal, the rock-flavored musical about a suburban housewife struggling with bipolar disorder, the dulling effects of medication and its affect on her family, will play the Coral Gables theater Jan. 18-Feb. 12 in 2012.

The work won the Pulitzer Prize for Drama, the Best Score Tony Award for Tom Kitt and Brian Yorkey, and the Best Actress Tony for Alice Ripley’s harrowing tour de force as the emotionally tortured Diana.

Like’Spring Awakening, the show is a passionate, sophisticated musical embraced by audiences not yet collecting Social Security. Its contemporary score features’I Miss the Mountains, one of the loveliest and most haunting ballads in musical theater.

Artistic Director David Arisco had been lobbying for the show for many months, but Executive Producing Director Barbara Stein was less than thrilled about the prospects for a musical that includes a number about whether to try electroshock therapy. The bare outlines of the material didn’t speak to her at all. ‘I didn’t see it in New York. I just really did not want to see it,’ she said.

Then Arisco persuaded her to listen to the soaring score on a CD. The passion in the music was overwhelming. ‘I had to stop listening to it in the car because it would make me cry,’ she said Monday. ‘I’m totally over the moon over it because I just think it’s so emotion-provoking.’

Finally, Stein realized that she and most of her audience could relate to the steadfast love of Diana’s husband through the trials and tragedies.

The announcement furthers Actors Playhouse’s struggle to push its artistic boundaries, bring its older audience along and attract a younger crowd as well. While it has always slipped contemporary comedies into its slates of frothy farces, it has been less adventurous with musicals, staying close to mainstream blockbusters with name recognition or small-scale inexpensive summer charmers.

But starting with the off-Broadway musical’Violet in 2001 about a disfigured but spunky heroine, Actors Playhouse has sprinkled in contemporary challenging musicals as well.

Most notably, its’Floyd Collins in 2003 stands as one of the creative milestones in local theater history. But it was also one of the lowest-grossing works on the Mainstage in the theater’s 24-year run. Audiences walked out even before intermission when faced with the folk opera of a doomed young man trapped in a cave during the Depression and the cynical media circus that surrounds the tragedy.

‘Floyd Collins, they just didn’t get it. It was a very hard show and I’m glad we did it, but with the atonal music and a story so deep, it takes a while to appreciate,’ Barbara Stein said.

Then in 2007, Actors Playhouse produced the wicked satire’Urinetown the Musical about a water shortage so severe that people had to pay to go to the bathroom, Again, many subscribers who had never heard of it were put off by the title, but those that came were won over by its wit.

The following year, Actors programmed’Altar Boyz, a musical farce which respected religion while teasing it. That one wasn’t a critical or popular success, in part because Jewish patrons weren’t intrigued by the title and Actors’ heavily Catholic audience were even less amenable.

A turning point may have been reached this spring with its acclaimed production of Tracy Lett’s scorching play about a dysfunctional family,’August: Osage County.

The general audience’s response to the dark tone and adult themes encouraged the’Next to Normal decision. People did not walk out as they had at’Floyd Collins. Word of mouth and reactions in the lobby at intermissions were positive.

‘Some (of the theater’s older, traditional audience) said they didn’t really appreciate the language or like the story, but they appreciated the talent on stage,’ Stein said.

The 600-seat theater was nearly full for performances at the beginning and end of the run, although disappointing in the middle of the run and especially in the middle of the week. It had an average capacity for the whole run of about 60 percent ‘ hardly great but not bad for a straight play at Actors that its subscribers had barely heard about.

The other upside, Stein said, was the fresh, younger faces in the crowd. ‘Of course, we saw a wonderful new audience.’

The drive for diversity of material is simply a matter of having a well-rounded season, Arisco said Monday. ‘It’s very much what we ought to be doing. When your next season has a’Hairspray and a’Joseph (and the Amazing Technicolor Dreamcoat), you ought to also be doing a’Next to Normal.’

Similarly, Maltz Jupiter Theatre’s Artistic Director Andrew Kato has been nudging his audience which favors’The Sound of Music and’Crazy For You. Last year, he slipped in one of Neil Simon’s darker comedies,’Lost in Yonkers, and he opened this season with a solid’12 Angry Men. Next season, along with’Hello Dolly, Kato will bring in the regional premiere of the acclaimed serious drama’Red about the volcanic abstract painter Mark Rothko. Kato’s pre-show speeches assure the audience that while they might not have heard of the play, they’ll enjoy it.

Next to Normal has its own challenges. It requires a world-class singing actress for the lead. The charcoal-voiced Ripley, a veteran performer best known for the cultish’Side Show, stayed with the production from an early version in 2006 until last July. She’s now on a 36-week tour that is playing Des Moines and Charlotte, but wasn’t booked into any of three road show houses in South Florida.

This puts Actors Playhouse staff in the same bind it faced when casting the lead for’August: Osage County. Arguably, they could have found someone locally to play’August‘s vitriolic matriarch; Barbara Bradshaw, Angie Radosh, Beth Dimon and Lourelene Snedeker’s names have been mentioned. But the role went out of state to Annette Miller who undeniably did a fine job.

No doubt there are superb actresses in New York who could nail the Diana part, including some who work down here frequently. But there are several actresses locally who might do justice to Diana. The competition is likely to be fierce.

In the end, Stein is banking on an audience reaction like she saw for’August: Osage County, something similar to her own reaction to the drama.

‘I saw it four times and I never do that with a play. I learned something about myself, about people I know and I learned about life. And I think that’s what’Next to Normal can do.’

One Response to Actors’ Playhouse to mount dark, challenging musical “Next to Normal”