“Addams Family,” “Shrek” and “Lion King” among the Broadway shows next season at Arsht Center 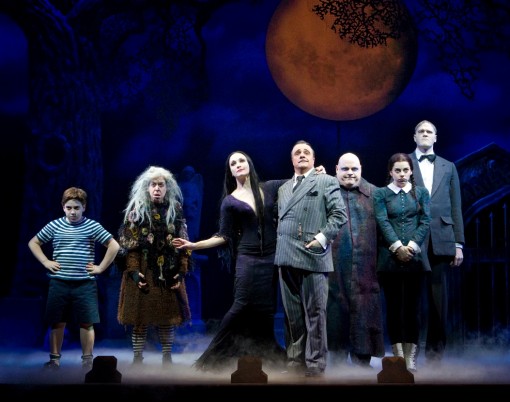 A mildly creepy family will move into Miami just before Halloween this year, that bizarre collection of seeming refugees from a television series and more recent comic horror movie known as The Addams Family.

The oddball musical of the same name is the first of five national tours coming to the Adrienne Arsht Center for the Broadway in Miami series during the 2011-2012 season.

Following Addams Family in downtown Miami will be musicals built around a green ogre, a king of a lion, dancers jiving to a Sinatra jukebox and a jam session by four of rock n’ roll’s pioneers.

Strangely, only The Lion King (which has never played in Miami before) is sitting down for more than a week. Most of the six shows playing in Broward will perform for at least two weekends.

The Addams Family starring the incomparable Nathan Lane as Gomez and Bebe Neuwirth as Morticia has been a solid hit on Broadway with audiences whose ecstatic word of mouth has kept the show’s producers happily humming to the bank. On the other hand, the show has been reviled by critics (including this one) as a misconceived mediocrity whose only saving grace was Lane’s performance. Casting has not been announced for the show playing in Miami Oct. 25-30.

The Addams Family musical takes a more mainstream approach than the subversive tone of the New Yorker cartoons or the television show. Here, Gomez and Morticia struggle to clean up their act to impress the parents of the straight-arrow beau of Wednesday who has now grown up. The book is by Rick Elice and Marshall Brickman (who gave us’Jersey Boys) and the music is by Andrew Lippa (The Wild Party). The impressive sets on Broadway were by Phelim McDermott and Julian Crouch who started out doubling as the directors but stepped aside for the brilliant Jerry Zaks when the show was savaged during an out-of-town tryout in Chicago. Video of the Broadway production can be seen at’www.theaddamsfamilymusical.com.

The next show slated for the Sanford and Dolores Ziff Ballet Opera House is’Shrek the Musical, set for Dec. 6-11. Based on the first of three animated films, the show had a strong run on Broadway with its satiric fairy tale about the titular monster, a gorgeous princess and a smart-aleck donkey all learning that you shouldn’t judge a boogeyman by the chartreuse color of his skin. For a look at the Broadway version, see’www.shrekthemusical.com.

The creative team has an impressive pedigree, including book and lyrics by David Lindsay-Abaire (Rabbit Hole and the current’Good People) and music by Jeanine Tesori (Thoroughly Modern Millie and’Caroline, Or Change).

Coinciding with New Year’s Eve will be’Million Dollar Quartet, a fictionalized account of an actual jam session in 1956 at Sun Records studio with Elvis, Jerry Lee Lewis, Carl Perkins and Johnny Cash performing their greatest hits (to date at that date). The show is slated for Dec. 27-Jan. 1, including New Year’s Eve and New Year’s Day, although curtain times may change. To hear a few licks, visit’www.milliondollarquartetlive.com.

Two legends collaborate, one from the grave, on’Come Fly Away Mar. 20-25. Choreographer Twyla Tharp sets 15 of her dancers to illustrating the Frank Sinatra songbook much as she did with the Billy Joel oeuvre in’Movin’ Out. Unlike that production, this one doesn’t have a story arc, but Tharp’s work was praised when the show opened a year ago in New York. Ol’Blue Eyes’ voice is resurrected digitally, but the band is live. Tharp is remembered locally for her’Nightspot project with the Miami City Ballet and Elvis Costello which had its world premiere at the Arsht Center in 2008.

Finally,’Disney’s The Lion King finally makes it to Miami after appearing several times in the region. The performances May 15 and 16 are listed as previews while the cast and crew adjust the technically complex show to the specific parameters of the Arsht. The show officially opens May 17 and runs through June 10.

Season tickets ranging from $131 to $512 are immediately available by visiting’www.broadwayacrossamerica.com or by calling (800) 939-8587. Single tickets are usually offered about six to eight weeks before the season beings.

All the shows are presented by the non-profit Florida Theatrical Association in association with the Arsht Center (now in its second year as an active participant in the series), but produced by Broadway Across America which now invests in shows on Broadway with a view to putting them on the road later.