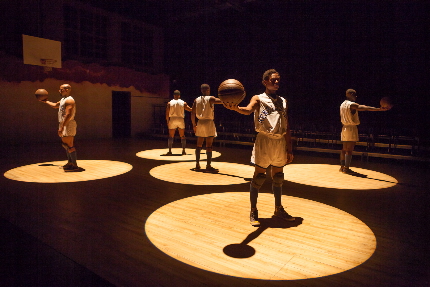 Kings of Harlem from M Ensemble

South Florida has long been home to minority-dominated theater companies as well as productions in which race was a central theme. But the Carbonell Award nominations for 2017 released this morning underscore how opportunities have grown specifically for African-American artists in the region and for audiences interested in their work.

This was especially evident in the seven nominations for M Ensemble, reportedly the oldest continually operating African-American company in existence in the state.

The 47-year-old troupe has struggled in recent years, economically and artistically, as it moved from venue to venue across Miami-Dade County. But it finally settled last year into a permanent home in the new Sandrell Rivers Theatre in north Miami and a renaissance was immediately apparent.

Click here to read a complete list of 2017 Carbonell Award nominations and breakdown by show, theater and county.

Its very first production there, the basketball-themed Kings of Harlem, took five nominations including best play, best ensemble, best scenic design for Mitchell Ost, best supporting actor for Andre L. Gainey and best director for the show’s creator Layon Gray. Its subsequent revival of Flying’ West earned a best supporting actress in a play nod for the venerable Carolyn Johnson. Another revival, Brothers of the Dust, garnered a supporting actress in a play nomination for up and coming Rita Joe. 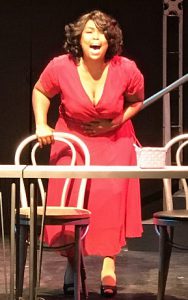 In fact, at least 10 African American artists scored nominations among the 20 categories including: best actress in a play for Karen Stephens’ turn as an urban Mother Courage in Theatre Lab’s Motherland; Elijah Word recognized as the electrifying James Thunder Early in Broward Stage Door’s Dreamgirls as a candidate for best supporting actor in a musical; Marckenson Charles for best actor in a play as part of the brother act in Zoetic Stage’s Topdog/Underdog; a best actress in a musical nod to Sarah Gracel as Effie, the aggrieved heroine with a hurricane voice in Dreamgirls, and Ron Hutchins for his choreography in Actors Playhouse’s Evita.

The winners as well as special honors and scholarship recipients will be announced during the ceremony at 7:30 p.m. Monday, April 2, at the Broward Center for the Performing Arts. Nicknamed “Theater Prom” by the thespian community, the ceremony is open to the public. Veteran director/choreographer Kevin Black will be producing and directing the show for the first time this year.

As always, major powerhouses gathered the most nominations: the Maltz Jupiter Theatre with nine recognizing its production of Newsies and Gypsy, and Zoetic Stage whose 17 nominations were the result of every show in its season: ¡FUÁCATA! , The Caretaker, Sunday in the Park With George and Topdog/Underdog.

But the work of less high-profile troupes were honored as well. In Fort Lauderdale, Thinking Cap Theatre’s mountings of Lizzie the Musical, Straight White Men, Grounded and Collective Rage produced at least one nomination connected to every major project it produced this season.

New City Players, which rents space in Thinking Cap’s home of the Vanguard, hosted a best actor in a supporting role for Kevin Reilley’s Malvolio in Twelfth Night. Ground Up & Rising, the peripatetic company last housed at South Miami Dade Cultural Arts Center, did similar honors for Gregg Weiner as best actor in a his first one-man show as the mesmerizing title character in Ground Up & Rising’s play for The Good Thief. 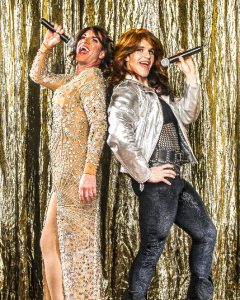 Tom Wahl & Clay Cartland in The Legend of Georgia McBride

The quality of local talent was especially apparent in several tight tough races. In a better world, the best actor in a play category would be a five-way tie: Weiner in The Good Thief; Clay Cartland investing heart and humor as a Panhandle Elvis impersonator who reluctantly makes end meet as a drag queen in GableStage’s The Legend of Georgia McBride; Charles as Booth in Zoetic’s Topdog/Underdog, Nicholas Richberg as the flamboyant Tennessee Williams in Billy & Me at Palm Beach Dramaworks, and veteran David Kwiat inhabiting the garrulous and scruffy homeless man in Zoetic’s The Caretaker.

It was the same among the five candidates for best actor in a musical: Shane Tanner giving a fresh frightening turn in Dramaworks’ steampunk vision of Sweeney Todd; Bruce Linser as a touching Man in the Chair in The Wick Theatre’s The Drowsy Chaperone, Cooper Grodin as Seurat in Zoetic’s Sunday in the Park With George, and competing against himself, Michael Ursua as an atypically vulnerable Albin/Zaza in MNM Productions’ La Cage aux Folles and as the emotionally ravaged Archibald in Slow Burn’s The Secret Garden.

The nominees for best actress in a play are just as daunting a field: Stephens in Motherland, Joe in Brothers of the Dust, Elena Maria Garcia for playing two dozen Latina women in Zoetic’s original  ¡FUÁCATA!,  which she co-wrote, Niki Fridh for her one-woman turn as a sidelined pilot in Thinking Cap’s Grounded, and Anne-Marie Cusson as the aging writer in Dramaworks’ Collected Stories.

The region’s growing reputation as a source of new plays was cemented by the works in contention for best new work: ¡FUÁCATA!, ; Broken Snow; The Camp; Finding Mona Lisa at Actors’ Playhouse, also by McKeever, and The Goldberg Variations at Island City Stage by Stuart Meltzer. The only major surprise is the absence on the list of Terry Teachout’s world premiere Billy & Me at Dramaworks.

The awards were created in 1976 by the South Florida Entertainment Writers’ Association, Inc. (later called the South Florida Critics Circle) led by the late Jack Zink of the Sun Sentinel, and the late Bill von Maurer of the Miami News.

The Carbonell organization uses proceeds from the ceremony and other fund-raising to provide scholarships to graduating high school seniors who plan to pursue a degree in theater or journalism. The awards were renamed the Jack Zink Memorial Carbonell Awards Scholarship in honor of the late Sun-Sentinel critic who co-founded the Carbonell program. Applications for the Jack Zink Memorial Carbonell Awards Scholarships are currently being accepted. Full info at http://carbonellawards.org/scholarships. The deadline to apply is February 5.

The First Annual Theatre Circle Awards held its ceremony November 15, 1976, drawing about 175 people to the Diplomat Hotel Regency Ballroom. The plays and musical categories were combined and any Equity production was eligible including national tours and road shows.

But some resent the awards for making artists competitive, some question the validity of comparing apples and oranges, and some believe the selection reflects prejudices, grudges and hidebound mainstream attitudes of nominators and judges. (Full disclosure: Since 1998, I have been a nominator, assistant administrator and currently a judge.)

The 42nd  Carbonell Awards ceremony is 7:30 pm. Monday, April 2 in the Amaturo Theater, at Broward Center for the Performing Arts, 201 S.W.  5th Ave., Fort Lauderdale. Tickets for Nominees and Groups will be available starting January 18 with order forms due by March 5.  Visit CarbonellAwards.org and click the TICKETS link for full details. All tickets are priced at $25 plus service fee will go on sale to the public on March 9 and can be purchased at the Broward Center’s Box Office by calling 954-462-0222 or visiting www.browardcenter.org. Day of show tickets will be available for $35 plus service fee.