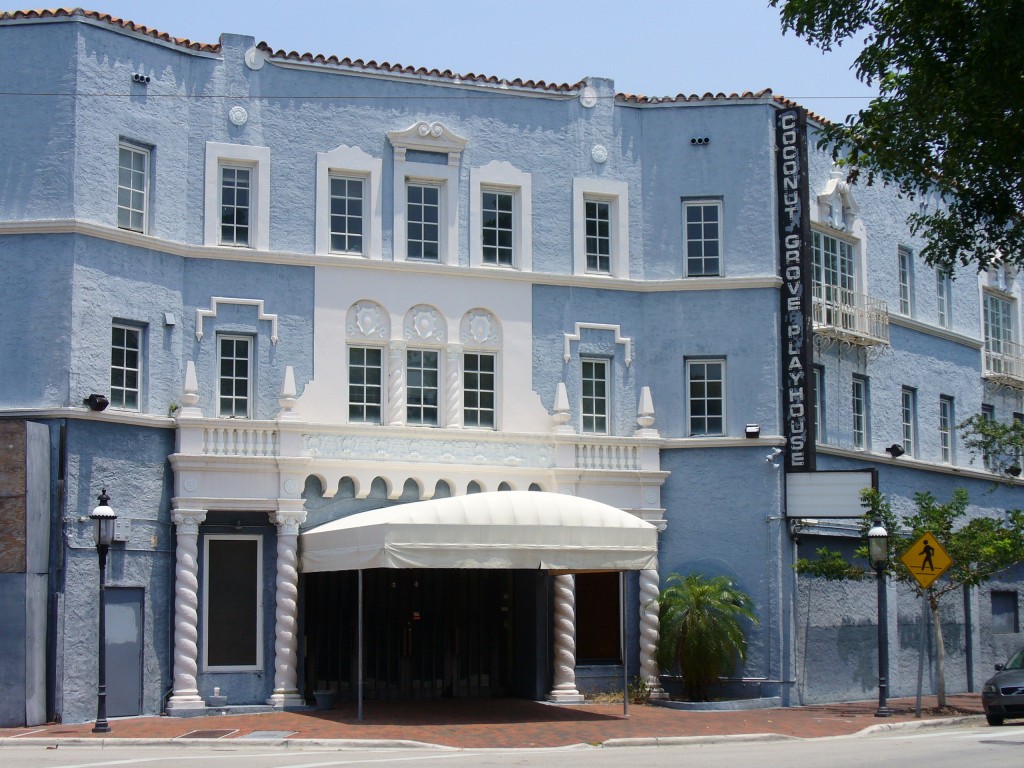 The state of Florida will take ownership of the shuttered Coconut Grove Playhouse Friday morning as officials warned a month ago, a state spokeswoman confirmed Thursday afternoon.

The Playhouse board of directors unanimously voted Oct. 2 to voluntarily turn over the landmark theater to the state, according to an Oct. 5 letter from board chairwoman Shelly Spivack to the state.

Irrespective of the vote, the state invoked a clause in the title Thursday that required the property return to the state’s control if it was not used as a theater for 30 days. The building closed its doors in April 2006 after its nationally-famous theater company revealed a $4 million debt and ceased operations.

Huge questions remain as to future fate of the three-story Spanish rococo edifice at 3500 Main Highway in the southwest corner of the Coconut Grove business/entertainment district.

The property likely will be sold or leased over the next 45 days, according to an email from Dee Ann Miller, deputy press secretary for the state Department of Environmental Protection which supervises land acquired by the state.

Miami-Dade County government officials continue to want to pursue building a theater on the site using $20 million of bond money set aside for that purpose, said Michael Spring, director of the county Department of Cultural Affairs.

“Our intention is to bring great theater back to the Playhouse. I know the mayor, Carlos Giminez, agrees and the district’s commissioner, Xavier Suarez,” said Spring on Thursday evening.

But the deal would depend on the specific details and requirements that the state puts on the deal. For instance, the law seems to indicate that the purchase must be at a fair market value – a six or seven-digit figure. The county would likely ask the state if it has the latitude to sell the property for a token amount so that the county bond money can be spent on developing the theater, not purchasing real estate.

But that’s getting ahead of the process. In the priority pecking order, state law requires the land be offered first as a sale or lease to universities, then to community colleges, then state agencies, according to Miller’s email. Then the county gets its shot. If the county balks, the land could be offered to the City of Miami and then as a last resort, at a public competitive bid process.

The transfer of title from the Coconut Grove Playhouse LLC on Friday is just one more scene in the complex and troubled drama of the 86-year-old building punctuated by a whirlwind of arguments and controversies. There have been recriminations between the Playhouse’s last Producing Artistic Director Arnold Mittelman and the board members over the debt. Developers lusting after a piece of prime real estate have jockeyed for an edge to use it for any number of purposes including a shopping center. Preservationists have pointed out that the building has protected historic status with the City of Miami which gives the city approval over any significant renovations or demolition. Arts partisans just want either a new theater behind the historic façade or a new 300-seat theater on the Playhouse’s parking lot.

Some creditors still hope that whatever deal is struck might recoup some of their money. It was not clear Thursday what happens to those creditors’ claims when the state takes title.

But on Friday afternoon, Miller reported the state’s position is that when the title reverts back to the state, it reverts to the financial condition that it had been in when it was given to the Playhouse board in 1980, that is, debt-free.

The total debt likely would be much smaller than $4 million because the Playhouse board has been negotiating with creditors with the county’s help. But those talks, which continued as recently as ten days ago, broke down when creditors refused to cut their losses to a degree that other parties would accept. No one can agree on exactly what size debt remains.

Among the creditors:
* Henry Pino, who made an exploratory deal to develop the property while the playhouse was still open. He had put $350,000 in escrow and has accumulated interest and legal fees. That money was reportedly spent to pay payroll, Spring said.
* The City of Miami, which fined the Playhouse about $150,000 for code violations resulting from deteriorating conditions and vandalism.
* The Aries Group, a company that made an exploratory deal to develop the property after the doors closed, says it has spent $1.5 million for, among other things, efforts to settle some of the other debts. Aries was willing to reduce its claim significantly but not enough that the Playhouse could agree to.
* Various small creditors whose losses total between $50,000 and $100,000 .

Over the past two years, the Playhouse board and the county government structured a rescue scenario that was temporarily scuttled last month when the state gave the players 30 days to work out a done deal.

The initial county vision is to build a smaller 300-seat theater in the parking lot, possibly with some commercial development. The public part of the project would be paid for with $5 million in Convention Development Tax bond proceeds and $15 million in Building Better Communities bond funds already put aside and earmarked for that purpose by the voters. That resurrected Coconut Grove Playhouse would be operated by the board of the current GableStage theater and Producing Artistic Director Joseph Adler. GableStage is currently housed on a month-to-month lease at the Biltmore Hotel.

The fate of the existing building itself is less clear. Most people assumed the property had fallen into disrepair. Its contents — including costumes, props, lighting equipment and irreplaceable show programs — were widely believed to have been in danger from the elements. But in the past few months, the Playhouse board and the county sent in emissaries to evaluate the building, Spring said. Several surprises emerged: The building does not appear to pose any immediate danger of collapse although it reputedly has structural problems and no one knows if it can be remodeled. Several improvements to shore up the building such as sealing windows were carried out after the inspections.

A University of Miami librarian inspected the copious architectural plans, set designs, business records and other paper documents still stored inside. Ellis Tillman, a local costume designer who worked at the Grove, inspected the costumes, props and equipment. Both found the contents “in remarkably good shape,” Spring said.

The Playhouse board’s Oct. 5 letter also reaffirmed the board’s support for the county’s plan.  “It is our hope that the State will continue these efforts and partner with Miami-Dade County to enable the redevelopment of the theater….”

The board has been criticized by observers for their stewardship during and after the financial meltdown. In the letter, Spivack defended the board’s activity: “I want to emphasize that every action that we have taken has been dedicated to restoring great theater to this site and that we have done everything within our power to care for and protect this important community asset.”

Asked to discuss the letter and confirm details of the ongoing situation, Spivack said in a telephone conversation Thursday, “I have no comment on this entire story. I’m just waiting to see what happens.”

The Playhouse was built in 1926 as a 1,500-seat movie house called The Grove. The back wall was damaged by the famous 1926 hurricane, requiring more repairs before it could formally open as a Paramount film theater the following year.

Since then it opened and closed and reopened again like a phoenix under various ownerships as a movie house, until 1953 when a doctor reenvisioned it as a place for locally-produced versions of recent Broadway plays. The single season was a debatable success.

But in 1955, at the very dawn of the regional theater movement, Miamian George Engel overhauled the interior and exterior, making it a lush showplace that he hoped would attract not only local patrons but be a draw for visitors. It’s grand opening in 1956 as the rechristened Coconut Grove Playhouse made worldwide headlines because it hosted the American premiere of Samuel Beckett’s European sensation, Waiting For Godot starring Tom Ewell and Bert Lahr. Many audience members left befuddled by the absurdist and existentialist work that merged comedy and tragedy.

For the next half-century, the theater was owned, operated and helmed by different groups and people, notably actor-producer-director Jose Ferrer and, in another incarnation, as the Players State Theater—one of only three state-sponsored theaters. The state took ownership in 1980 by purchasing a $1.5 million mortgage and contracted with the Playhouse board to run it until transferring the title to the board in 2004.