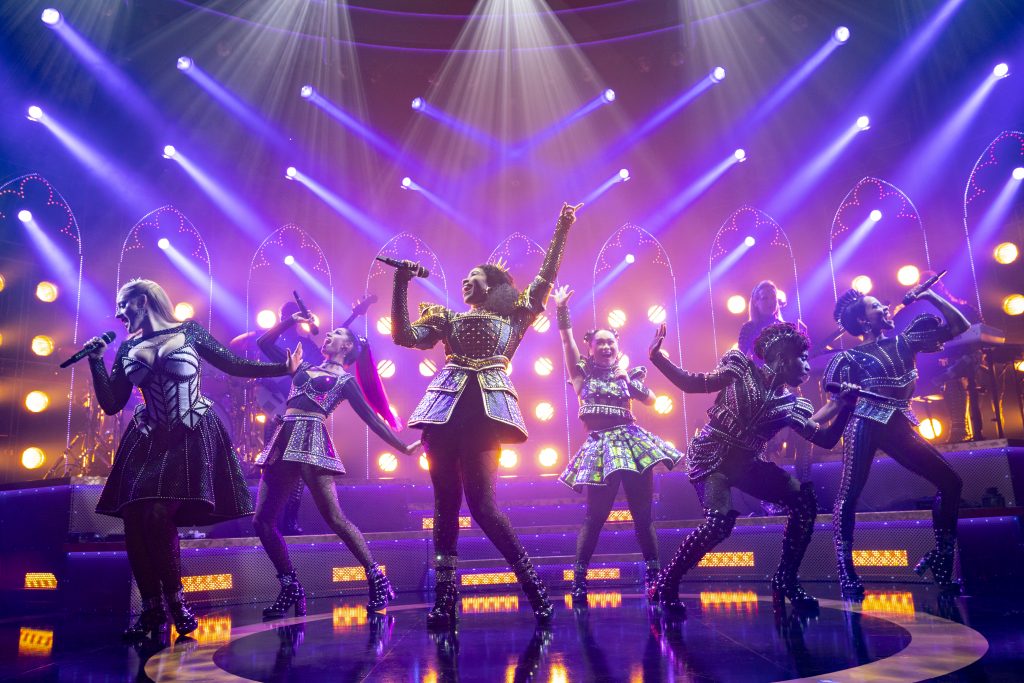 The Broadway cast of Six / Photo by Joan Marcus

Some of the hottest ticket titles on Broadway right now will be within driving distance next season as the Broadway Across America tours stop off in Miami and Fort Lauderdale.

The sizzling hot chamber rock musical Six about the wives of Henry VIII will be in Broward Center and then a few days later the Arsht Center in October.

In case you want to see them again and sing along, Hamilton and Wicked will return. Also on the schedules: Beetlejuice (the musical), the Tina Turner bio-musical and (believe it or not) a play (remember those?), the Aaron Sorkin reworking of Harper Lee’s To Kill a Mockingbird starring Richard Thomas.

Plus the Lincoln Center revival of My Fair Lady, Disney’s Aladdin as opposed to RuPaul’s Aladdin, the Temptations story, a Riverdance anniversary production, Mean Girls and some cult show you might never have heard about, Chicago.

Here’s the descriptions and schedules.

A dazzling musical from London by Toby Marlow & Lucy Moss  in which six actresses portray the wives of Henry VIII. The Tudor queens are portrayed as musical pop princesses fully aware of their power as women, each detailing their troubled lives with Henry resulting, to quote the opening song’s lyric “Divorced, beheaded, died, divorced, beheaded, survived.” Currently it is the hit on Broadway.

If you have to ask……

This is an optional offering with a separate additional ticket purchase.

An uplifting comeback story, the musical outlines the journey of the riveting performer who broke barriers and became the Queen of Rock n’ Roll. The show features most of her classic songs and some you may not remember. Until she left recently, Adrienne Warren set the New York stage on fire in the role. The script is written by Pulitzer Prize-winning playwright Katori Hall and directed by Phyllida Lloyd best known for helming Mamma Mia!

A little-known little-seen musical by Kander and Ebb about a couple of upstanding virtuous young women unjustly jailed and awaiting trial for crimes they might or might not have committed.  (Choose between this or Mean Girls listed below for the sixth ticket in your regular season package.)

Harper Lee’s To Kill A Mockingbird

Not the version you’ve seen on high school drama stages for a half-century, famed film and television screenwriter Aaron Sorkin has re-adapted the classic Pulitzer Prize-winning masterwork. A raging success in New York with Jeff Daniels in the Atticus Finch role, the play casts adults as the children and inserts other changes. Directed by Bartlett Sher, the tour will star another “country boy,” Richard Thomas, who has considerable stage experience.

Capturing the vibe of the movie, this musical has the advantage of a script by the film’s Tina Fey. Cady grew up in Africa, but nothing prepared her for the vicious ways of her strange new home: suburban Illinois. Soon, this naïve newbie falls prey to a trio of lionized frenemies led by the charming but ruthless Regina George. But when Cady devises a plan to end Regina’s reign, she learns the hard way that you can’t cross a Queen Bee without getting stung. (Choose between this or Chicago listed above for the sixth ticket in your regular season package.)

Don’t say it three times or Tim Burton’s devilish demon and two dead newbies will sing to you along with a pack of unusual colleagues serenading a strange teenager, Lydia.

Season tickets for the 2022/2023 Bank of America Broadway in Fort Lauderdale six-show package are currently available and range from $279 – $945. To renew or purchase a new subscription visit BroadwayInFortLauderdale.com.

Heck, if you want to see it twice after Broward, drive down I-95.

Based on the animated film beloved by two generations of children, the music is a carpet ride written by Alan Menken (Newsies) with lyrics by Howard Ashman (Beauty and the Beast), Tim Rice (The Lion King, Aida).

A musical about this girl from Kansas and her dog…. No, actually, you know what this is all about. Defying Gravity.

Lincoln Center, which revived a lush The King & I and South Pacific, mounted an acclaimed new version of Lerner & Loewe’s masterpiece, directed (once again) by Bartlett Sher. Features the score most of you can sing along with… but please don’t.

Ain’t Too Proud: The Life And Times Of The Temptations

More than a revue of the classic soul-stirring catalog, this rousing musical traces the bumpy tale of a supergroup whose membership changed over and over during its heyday. Written by three-time Obie Award winner Dominique Morisseau, directed by two-time Tony Award winner Des McAnuff (Jersey Boys), and featuring the Tony-winning choreography of Sergio Trujillo (Jersey Boys, On Your Feet!)

Season ticket prices are now on sale and prices for the five-show subscription package range from $202 to $786*. Current subscribers may renew their season tickets now by visiting arshtcenter.org or calling the box office at 305.949.6722 or the Season Ticket Holder Hotline toll-free at 800.939.8587. Renewal period ends April 28, 2022.

This entry was posted in News and tagged Adrienne Arsht Center, Broadway Across America, Broward Center for the Performing Arts. Bookmark the permalink.