Posted on November 2, 2010 by Bill Hirschman 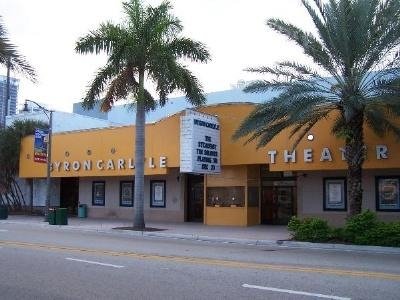 The Broward Stage Door Theater is trying once again to expand its operations to another venue outside its Coral Springs home.

The company is ‘in negotiations’ with the City of Miami Beach to rent the 304-seat Byron Carlyle Theater as a self-contained stage for Stage Door’s fare of musicals and comedies, said co-founder David Torres.

The city would continue to own the former movie theater that has been used only intermittently for sporadic dance recitals and short term productions. But Stage Door would lease the space around the early part of 2011 for a still-to-be-determined rent as its sole tenant after current bookings are satisfied, Torres said. The lease would last five years with an option for another five.

The city commission agreed this week to open formal negotiations on a contract that could come up for a vote in November. But the city approached Stage Door about the idea months ago and the company has been undergoing vetting by city officials for at least six months.

The 18-year-old company has been seeking an additional venue for nearly two years. It was exploring space in a shopping center being renovated in Miramar and later failed to secure the Cuillo Centre for the Arts in West Palm Beach that was snatched up by Palm Beach Dramaworks. For seven years, it rented the 26th Street Theatre in Wilton Manors.

The Carlyle was built as a movie house at 500 71st St. in 1968, but was bought by the city in 2002.’Since the building has continued to be rented out, Stage Door producers believe the building will not need much work other than equipping it with better stage lighting and sound system.

Stage Door would produce the same kind of mainstream fare that it currently offers at its double auditorium in Coral Springs, where it is currently mounting On The Town. While it is possible that successful shows in Broward County would be transferred to the Carlyle, Torres thinks it more likely that the theater needs its own identity and schedule of its own.