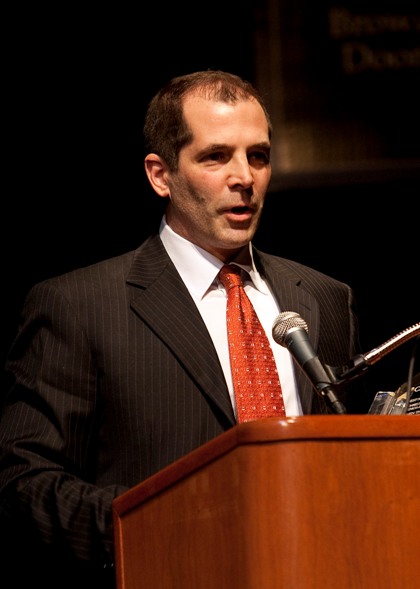 Christopher Demos-Brown is among six finalists for one of the most esteemed playwriting honors in the country, the Harold and Mimi Steinberg/American Theatre Critics Association New Play Award.

The selection was based on the script for his play Fear Up Harsh that premiered in November at Zoetic Stage.  The drama told of two wounded veterans of the war in the Middle East who return  home to radically different welcomes.

The critic/judges praised the work as “The secret backstory behind the awarding of a Congressional Medal of Honor to a wounded Marine emerges in this mercilessly penetrating interrogation about how our need for heroes — a need even among the heroes themselves – can trump the very values of truth, honor and loyalty that they fought to preserve.”

Brown said Thursday, “I consider this one of, if not the most prestigious awards that playwrights can vie for, partly because of its inherent prestige and partly because of who gives it. Being a finalist will be significant in giving me a bump in getting it produced elsewhere.”

Although the ATCA competition is strictly a playwriting award, it recognizes and honors the contribution of the theater helping shape the first production, That production led to widespread critical and audience praise as well as five Carbonell nominations for best new work, best play, best actress for Karen Stephens, best supporting actor for Stephen G. Anthony and best supporting actress for Jessica Brooke Sanford.

Brown, a Miami civil trial attorney by day, is a founding member of the Zoetic company which also produced his Carbonell-winning play Captiva in 2011. Among his other works is When The Sun Shone Brighter which won a Carbonell Award for best new work when it bowed at Florida Stage.

To read our interview with him in 2011, click here.

Zoetic Artistic Director Stuart Meltzer, who directed the show, wrote, “All of us at Zoetic Stage are extremely proud of Christopher Demos-Brown and this production. Fear Up Harsh is a highly intelligent, daring and original work. We hope audiences across the country will have the opportunity to see this play.”
The American Theatre Critics Association (ATCA) contest recognizes playwrights for the best scripts that premiered professionally outside New York City during 2013.

The top award of $25,000 and two citations of $7,500 each, plus commemorative plaques, will be presented April 5 at Actors Theatre of Louisville during the Humana Festival of New American Plays. At $40,000, Steinberg/ATCA is the largest national new play award of its kind.

The other finalists, alphabetically by playwright:

I and You, by Lauren Gunderson – Caroline, a cranky high school student in desperate need of a liver transplant, is enticed by classmate Anthony, a level-headed basketball star with a taste for English lit, into a school project deconstructing Whitman’s Leaves of Grass. As their quirky relationship evolves in fits and starts, they explore the meaning of life and death without a shred of condescension or pretentiousness. Delicate, smart and funny with sharp insights, the play grows quietly toward a surprising and overwhelmingly moving conclusion. It premiered in October at Marin Theatre Company as part of the National New Play Network’s rolling world premiere program.

Smokefall, by Noah Haidle  — This delightfully offbeat play embraces inventive theatricality and a poetic lyricism to depict three generations of a Midwestern family as they move through time. It combines a compassionate examination of familial unhappiness and the fragility of life with zany humor such as a second act consisting of twin fetuses arguing in their mother’s womb. The work bowed last spring as a co-production of South Coast Repertory in Costa Mesa, Calif., and the Goodman Theatre in Chicago.

H20, by Jane Martin – Fast and smart and fresh in its intersection of transitory showbiz and enduring faith, this drama depicts a deeply troubled flavor-of-the-month movie idol who is slated to play Hamlet on stage in New York. He woos a talented unknown actress to be his Ophelia after she foils his suicide attempt. Her profound faith in Christianity collides with his dark view of the world as she tries to save his production, his life and his soul in a play that is both terribly funny and deeply moving at almost the same moment. The play directed by Jon Jory premiered at the Contemporary American Theater Festival in Shepherdstown, West Virginia in July.

Stupid Fucking Bird, by Aaron Posner – Unlike almost anything else seen this season, this script was praised as “funny, wonderful, original, smart with a capital S, consistently imaginative but thoroughly grounded.” On the surface, it’s simply a modern retelling of Chekhov’s The Seagull that catches all the humor and wistfulness of the original that captures the inner reality of a great play. But Posner has transmuted the story “wrapping new words and ideas around old concepts” using form-bending theatricality to create a fresh sui generis work of art.

Seven Spots on the Sun, by Martin Zimmerman — This meld of magical realism and political issues is an affecting tale that examines whether forgiveness is truly possible, set against the ravages of civil war, lust, plague and a consuming need for vengeance. A widowed doctor in a small village and a newly-married soldier charged with subduing dissent take converging journeys towards redemption in this harrowing play that was unveiled at Cincinnati Playhouse in the Park in October.

Jonathan Abarbanel, Chair of the ATCA Executive Committee, observes, “Even though theatre critics don’t always give playwrights good news, this awards program has been central to ATCA’s activities for nearly 40 years. We recognize that theatre begins with words on a page, and no one but the playwright is there when the page is empty. We are deeply grateful for the continuing support of the Steinberg Trust and for the opportunity to present the award each year at the Actors Theatre of Louisville during the Humana Festival of New American Plays.”

Since the inception of ATCA’s New Play Award, honorees have included Lanford Wilson, Marsha Norman, August Wilson, Arthur Miller, Mac Wellman, Adrienne Kennedy, Donald Margulies, Lynn Nottage, Moises Kaufman and Craig Lucas. Last year’s honoree was Robert Schenkkan’s “All The Way.” For a full list of all of our winners and runners-up, go to www.americantheatrecritics.org and click on Steinberg-ATCA under Awards.

ATCA also presents the M. Elizabeth Osborn Award, honoring emerging playwrights.  It also administers the $10,000 Francesca Primus Prize, funded by the Francesca Ronnie Primus Foundation, honoring outstanding contributions to the American theater by female artists who have not yet achieved national prominence. Annually, ATCA makes a recommendation for the Regional Theater Tony Award presented by the American Theatre Wing/Broadway League and votes on inductions into the Theater Hall of Fame.

This entry was posted in News and tagged Christopher Demos-Brown, Fear Up Harsh, Stuart Meltzer, Zoetic Stage. Bookmark the permalink.