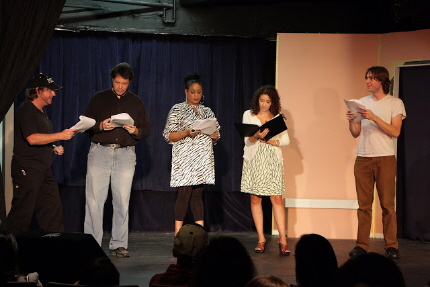 Conundrum Stages has been working quietly on the edges of the South Florida theater scene for so long that it’s both surprising and not surprising to hear that their current project this month, the Ghost Light Series, marks its 10th anniversary in Broward County celebrated with consecutive weekends of different works.

Conundrum president Kevin Johnson said the goal is to present of modest low-budget free readings of classic and contemporary plays with professional (but unpaid) actors and directors, giving artists a place to hone their craft in substantial fare but out of the high-pressure spotlight of a full production.

The Ghost Light Series dates back to November 2004 with a reading of Lillian Hellman’s The Children’s Hour. Ensuing productions were mounted in libraries and community centers. After formally incorporating in 2008, the staged readings gave way to other genres of live performance such as poetry readings. The pure theater component resumed as a month-long festival of plays in 2012 and now enlists talent from small local theaters such as Slow Burn Theatre Company of Boca Raton and Thinking Cap Theatre of Fort Lauderdale.

This year’s events, all free and slated to begin at 8 p.m. at Empire Stage at 1140 N. Flagler Drive in Fort Lauderdale, are:

God of Vengeance by Donald Margulies (author of Dinner With Friends, Time Stands Still and Collected Stories) Based on the 1902 play by Sholom Asch, God of Vengeance is a story of finding redemption by insertion into high society and the effects of forbidden love. Set on the Lower East Side of New York at the turn of the century, a brothel owner tries to marry off his innocent daughter to a Talmudic scholar. However, she is connecting with one of the working ladies in a burgeoning romantic relationship. It will be directed by Steven Chambers and feature Merry Jo Cortada, Laura DiLorenzo, Christina Groom, Joel Kolker, Peter Librach, Jennipher Murphy, Ann Marie Olsen, Stan Orlin, Amanda Ortega and Skye Whitcomb.

The Eccentricities of a Nightingale by Tennessee Williams. The central character Alma has a lovely voice, but her love life is a different story. Afraid of being alone for the rest of her life, she tries to woo the young doctor next door, only to be challenged by his over protective mother. Not helping matters is Alma’s stern minster father, senile mother and her quirky social circle. Directed by Nicole Stodard and featuring Sally Bondi, Merry Jo Cortada, Niki Fridh, Rayner Garranchan, Jim Gibbons, Sabrina Lynn Gore, Mark Kroczynski, Noah Levine, Matt Stabile and Janet Weakley.

Support Your Local Playwrights, an evening of short plays by local writers, plus musical and poetic interludes. The works include Hot Pursuit by Cynthia MacGregor,
directed by Paula Sackett with Joanne DePrizio, Vicki Goulet, Paula Sackett, John Stanley, and Lois Weiss; Sweet Talk by Todd Caster, directed by Geoffrey Short with Larry Bressler and Valerie Heller; Can You Sing? by Allan Provost, directed by Short with Rebecca Salus and Ben Sandomir; Deadline written and directed by Rachel Finley with Jair Bula, Vanessa Elise and Desiree Mora.

Admission is free but space is limited. Donations accepted.