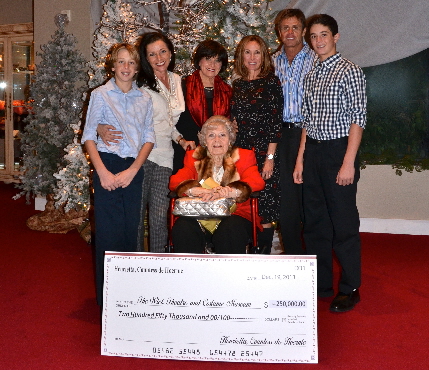 Henrietta, the Countess de Hoernle, poses with a blown-up copy of the $250,000 check she donated Thursday night to the Wick Theatre and Costume Museum, accepted by theater founder Marilyn Wick, second row center, and her family. / Photo by Amy Pasquantonio

The newly-opened Wick Theatre received a $250,000 donation Thursday night from Henrietta, the Countess de Hoernle, echoing a gift that she gave the former occupant of the Boca Raton facility, the Caldwell Theatre Company.

The lobby of the theater at 7901 N. Federal Highway will be named in her honor.

The Countess presented a $250,000 check during the intermission of the Wick’s current musical White Christmas and urged the community to donate in exchange for various naming rights in the building.

She told the audience, “This place is magical… absolutely fantastic. I cannot say enough. What the Wicks have done is so wonderful. I have traveled the world 20 times over… and have been in theatres everywhere…. but never anywhere have I seen such comfort and beauty. I’m speechless,” as reported by the theater’s publicist Kay Renz.

The Countess’ donation and endorsement comes at an opportune time for the region’s newest producer of mainstream theater. Ticket sales were much weaker than hoped for the first show as the theater begins to build word of mouth, founder Marilynn Wick said late last month.

Upon receiving the gift Thursday, Wick said, “I am speechless for your generosity.”

In a letter to the Countess, Wick wrote, “Words cannot express the gratitude we feel in our hearts for both your generous contribution to The Wick Theatre and Costume Museum, and for your invaluable guidance in launching our donor naming rights initiative. My daughters and I are overwhelmed by your kindness. For many years, we have read about the wonderful ways you have supported this community, but we never dreamed that you would bestow upon us your graciousness and incomparable support.”

The 101-year-old benefactor was present in the front row at the Wick’s opening night production of The Sound of Music in September. Earlier this month, she visited the Costume Museum with several friends, had luncheon in the theater’s recreation of the Tavern on the Green and then took in White Christmas, Renz said.

The Countess moved to Boca Raton in 1981 after her husband Adolph retired. They gave away at least $40 million to more than 30 causes, resulting in their names adorning at least 45 buildings and projects, according to her website.

She pledged $1 million in 1992 toward the construction for a new building for the Caldwell Theatre Company that was housed at the time in a strip mall. The Caldwell’s specific plans changed over the years, but the gift remained the cornerstone of what eventually became a $10 million structure opened in December 2007 and named in her husband’s honor. The Caldwell shut its doors in April 2012 due to mounting debts.

Wick, who owns and operates the largest theatrical costume company in the country, bought the structure in a lease-purchase deal with the bank that held the mortgage. She then sank what she has said is $1 million into massive renovations and remodeling including overhauling the theater infrastructure and turning a large portion of backstage into a new home for her museum of authentic costumes from historic Broadway and film musicals.

This entry was posted in News and tagged Henrietta the Countess de Hoernle, The Wick Theatre. Bookmark the permalink.