Posted on November 4, 2010 by Bill Hirschman 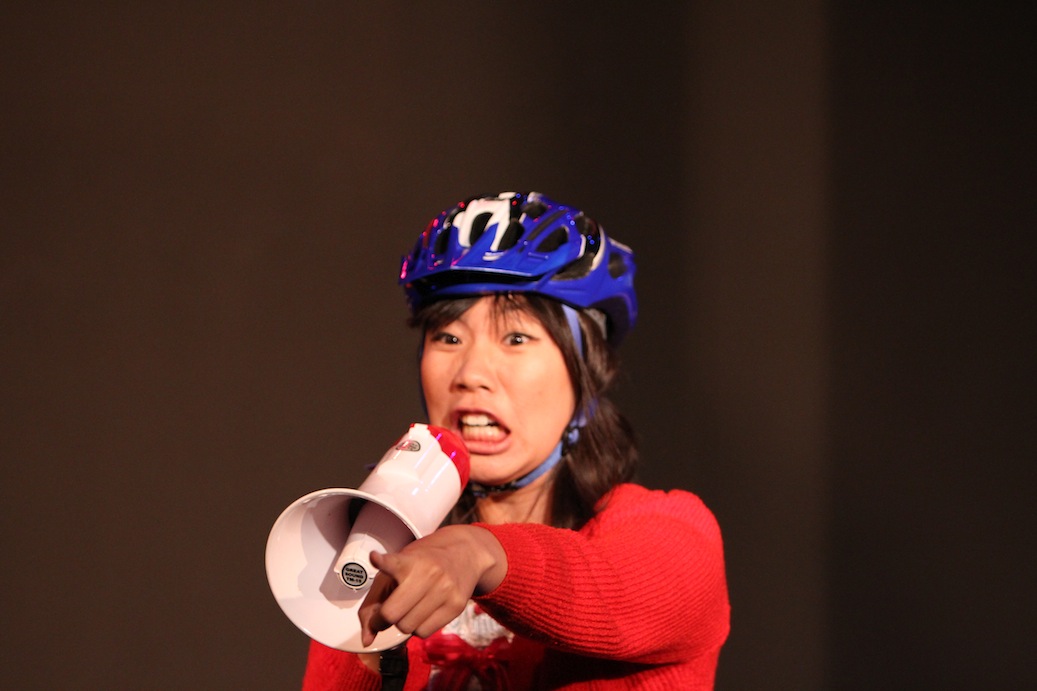 To quote that theological philosopher, Kermit the Frog, ‘It’s not easy being green.’

It’s a sentiment Kristina Wong plans to dramatize with a vengeance in her one-woman comedy, Going Green the Wong Way, a slightly surreal memoir from Mad Cat Theatre Company, directed by its founder Paul Tei.

The actress and self proclaimed ‘culture jammer’ will recreate her almost true misadventures striving to be ecologically responsible in four performances at the Arsht Center in Miami from Nov. 18-20.

Publicity materials say she purchased a 1981 pink Mercedes that ran on vegetable oil, leading to ‘a nightmare of never-ending car repairs and near-death pursuits for the used vegetable oil to fuel it. When the car finally burst into flames on a Los Angeles freeway, Wong lost the largest line item in her monthly budget.’

Tei met the San Francisco native when she performed at the South Beach Comedy Festival two years ago. He felt as if he had found someone with Mad Cat’s distinctively off-center attitude.

‘I was immediately taken with her sense of humor and her intelligence and really felt this cerebral connection to what she was talking about. It reminded me a little bit of (monologist and actor) Spalding Gray,’ Tei said recently. ‘I was watching this person who was on the fringe, pushing the envelope, the fine line between serious and funny.’

They stayed in touch by phone and Facebook. He hooked up with her again when he moved to Los Angeles last year to pursue a film and television career. Although she has tried out portions of the play in other venues, she and Tei have added, subtracted and altered the core material to the extent that they consider this a world premiere.

‘Like most Mad Cat shows, we’ll probably be rewriting right up to curtain,’ even adding Miami-specific material, Tei said.

It’s a Los Angeles-inspired show that Tei predicts will resonate for South Floridians. ‘It’s a car culture here too’ because everybody here bitches about traffic. There’s always going to be an accident on I-95.’

The California show is not an indication that Tei plans to abandon South Florida theater; he’s working on two scripts for Mad Cat. But he does hope Going Green furthers his dream of a theatrical pipeline between Miami and Los Angeles, moving productions between the two regions.

‘Perhaps we can bring Shepherd’s Pie to Los Angeles,’ Tei said, referring to one of Mad Cat’s signature successes.

Still, Wong is a creature of the West Coast. She recently received a Creative Capital Grant and a Creation Fund grant from the National Performance Network in support of her last show, Wong Flew Over the Cuckoo’s Nest. Her first solo show, Miss Chinatown 2nd Runner Up, was commissioned by TeAda New Works Festival. She is currently developing a solo show inspired by her cat’s rash of spraying problems, entitled Cat Lady.

This marks the second partnership production of the anarchic Mad Cat—which has no permanent home—and the corporate Arsht Center which helped underwrite the company’s revival of Broadsword earlier this year. As it enters its fifth year, the Arsht has become increasing involved with presenting local companies in its black box theater such as the coming February production of Crowns with the M Ensemble Company.